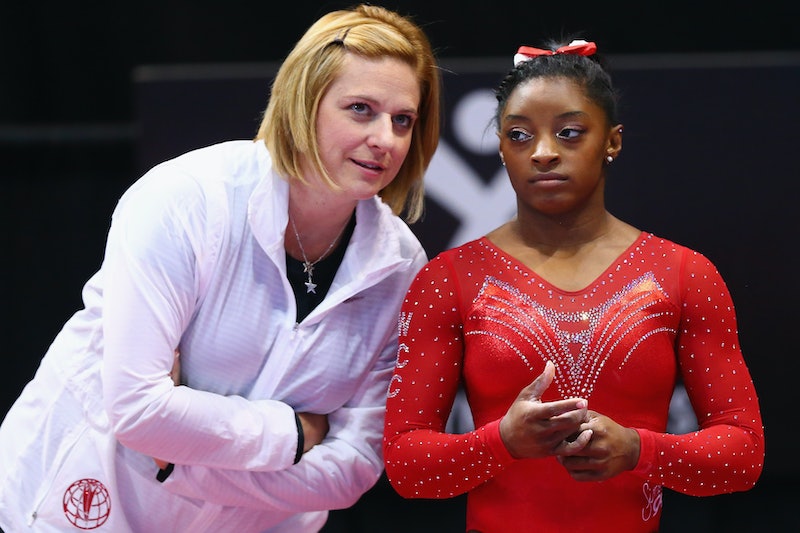 U.S. Gymnast Simone Biles has flipped, tumbled, and leaped her way into the hearts of American viewers throughout the 2016 Rio Olympics, securing her title as the greatest gymnast of all time. But Biles didn't get to that spot alone; throughout her years of intense training, Biles' coach, Aimee Boorman, has been behind her for every flip along the way. The two have been an inseparable pair, proving to skeptics that their unconventional partnership is the stuff of legends.

Raised by a single mother in Chicago, Boorman began her own career in gymnastics at the age of six in the city's park district. She began coaching at 13 to help cover the costs of her own gymnastics classes, and later continued on to one of Chicago's selective schools for her gymnastics training. Boorman also used this time to coach youth programs in the school. And though she also competed in the sport for 12 years, her career as a competitive gymnast ended following her high school graduation. From there, she temporarily put her coaching on hold to pursue a degree in sports business at Northern Illinois University.

But Boorman couldn't stay away from coaching for long. By the end of her freshman year, she was back in the gym teaching gymnastics for 10 hours a week. Not long after graduating, she moved to Houston, Texas, where she first caught a glimpse of Biles' talent. After attending a field trip to the gym with her preschool, Biles enrolled in classes where Boorman taught.

Upon first meeting Biles, Boorman recalled to The Los Angeles Times: "When I first saw her, I was like, ‘Wow, this kid has something.’ But what it was and how far she could go with it, I had no idea."

Given Boorman's dedication to her craft, it comes as no surprise that she has been able to succeed as a coach. But it's Boorman's style with Biles — a more hands-off approach that leaves room for personal time often unheard of in the gymnastic's world — that sets her training apart.

Boorman has a few unusual coaching methods up her sleeve, The Los Angeles Times reported. For instance, she does not monitor Biles' diet, encourages her to have a life outside of gymnastics, and wants her to spend time with friends. This would likely shock the coaches of many elite-level gymnasts, but Boorman told the Los Angeles Times that it has made their connection stronger: "Maybe we’ve lost other potentially elite athletes because we pushed them too far, too fast."

For some, successfully training an Olympian may go to their head. But Boorman's never allowed their mutual accomplishments to build an ego. She had never trained an elite athlete before, so the coach says she and Biles have been learning together.

Biles appreciates their partnership, too. She told NBC: "I’m very fortunate to have a coach that I got to stay with all this time. Every year the bond gets stronger and better and we understand each other more." With a coach like Boorman by her side, it's likely we'll continue to see Biles win gold after gold.