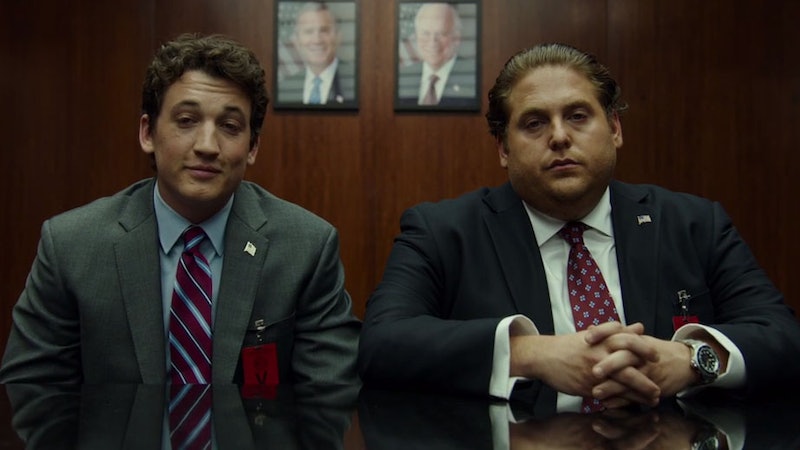 The new movie War Dogs features Jonah Hill and Miles Teller as two young kids in Miami Beach who get into some heavy territory when they win a $300 million contract to supply arms to the U.S. army. But even more astounding than the plot of War Dogs is the fact that it's based on true events. The story of Efraim Diveroli and David Packouz (played by Hill and Teller in the film, respectively) became highly publicized after it was revealed that they had cheated in their deal with the army by delivering illegal Chinese weaponry. The young men then grew even more in notoriety after a Rolling Stone article by journalist Guy Lawson came out detailing their many exploits in the arms industry. If you're interested in learning the full backstory, here's where you can read the War Dogs article and learn about what really happened to Diveroli and Packouz.

Luckily, you don't need to find an old hard copy of Rolling Stone to soak up the story. Although the piece was in the March 16, 2011 issue of the magazine, the full text is available on RollingStone.com. So you can read the 11,000-word article and have a solid grasp of all the details before you go see War Dogs in theaters.

Interestingly, though, the Rolling Stone story has a backstory of its own. Guy Lawson told Collider that he was inspired to dig into Diveroli and Packouz's tale after seeing a blurb about it in The New York Times. The writeup claimed that the two young men had scammed their way into a $300 million contract with the Pentagon, and it stuck out to Lawson as not sounding totally accurate. The journalist tracked the story and brought it to his editors, who had encouraged him to find new stories about "young people doing f***ed up things.” Seeing that the story was a potential fit for Rolling Stone, Lawson approached Packouz, who agreed to meet with him. And so the seeds were sown for the infamous piece that would come to be known as "The Stoner Arms Dealers: How Two American Kids Became Big-Time Weapons Traders."

After the success of the article, Lawson returned to the story and adapted it into a book. Arms and the Dudes: How Three Stoners from Miami Beach Became the Most Unlikely Gunrunners in History came out in 2015, and it looks at the story in greater detail. Most notably, the book includes details about the involvement of the "third stoner" Alex Podrizki, whose role wasn't heavily emphasized in the Rolling Stone piece.

If you're interested in the backstory of War Dogs, it's clear that there is no shortage of information to feast on. Whether you scroll through the Rolling Stone article, read Lawson's book, or just watch the movie, one thing is for sure: this is a crazy true story that you won't be forgetting anytime soon.