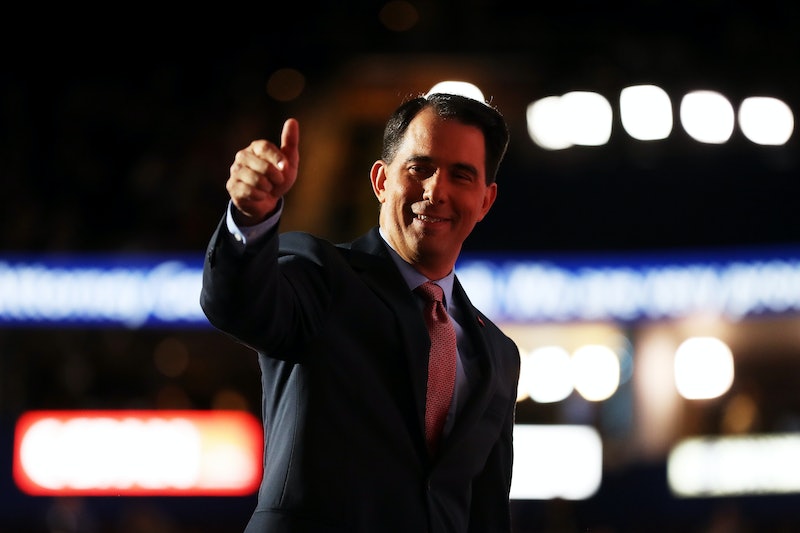 Sometimes, the extent to which politicians don’t understand the racial tensions that are boiling over in America today is just staggering. On Tuesday morning, Wisconsin governor and one-time GOP presidential hopeful Scott Walker slammed Hillary Clinton’s comments about the Milwaukee protests in response to an armed African American man being fatally shot by police. Walker spoke on Fox News' Fox & Friends about the Democratic nominee’s response to the crisis in his state, saying that she was "just inflaming the situation."

What were Clinton’s incendiary remarks to which Walker was responding? At a campaign stop on Monday in Scranton, Pennsylvania, she said, “Look at what’s happening in Milwaukee right now. We have urgent work to rebuild trust between police and communities and get back to a fundamental principle: Everyone should have respect for the law and be respected by the law.”

Don’t worry if you can’t find the kerosene-soaked rag in her words — they aren’t there. Walker’s simply participating in a long tradition of addicts and some politicians: claiming that the worst thing you can do for a problem is acknowledge that there is one.

I am far from the most intelligent or eloquent person to speak and think about the state of race in America in 2016 — I’ve found Jamelle Bouie’s writings to be among the best on the topic — but it’s important to double down on the idea that talking about our country’s racial problems, even if it brings up difficult or painful feelings, is good and necessary.

Walker’s other comments on Fox & Friends shed a little light on the harder next steps. “The people who live in the neighborhood want police — they want the police in Milwaukee and the sheriff's department to step up and protect them,” Walker said. “They didn't want the criminals who were doing those actions against those businesses to do that.”

Here, Walker has reduced the groups to residents and criminals, and this too is in keeping with rhetoric we’ve seen all over the 2016 campaign: It’s good guys vs. bad guys. But if there’s one thing that being an adult has taught me, it’s that you can never reduce people into groups of pure good and pure evil. It’s a fairy tale, a crutch we tell children so that the world doesn’t seem quite so volatile and unpredictable.

This doesn’t mean people who break the law shouldn’t face prosecution, but we need to move beyond showing up to a situation and thinking we know everyone’s motives, everyone’s story. In effect, this is exactly what Clinton was getting at: mutual respect. And at the end of the day, respect is the very idea that I believe Walker was attacking.