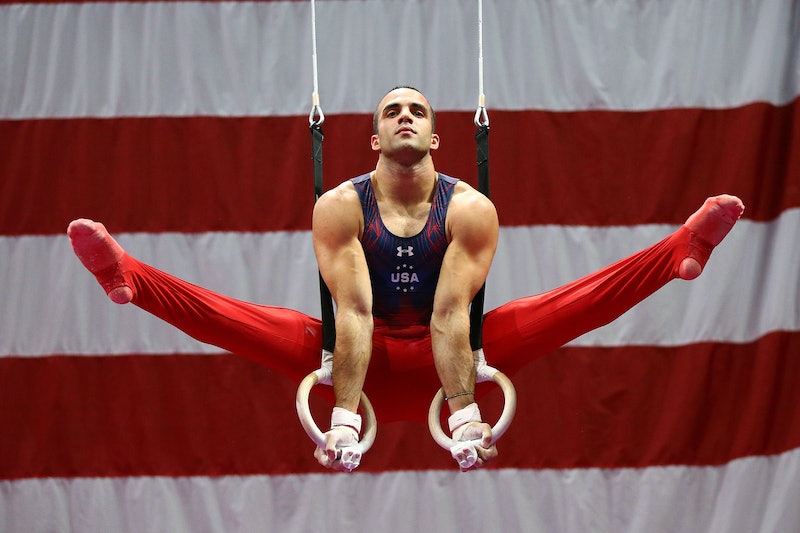 “Weird Questions Welcomed, Encouraged Actually.” That’s the headline on two-time Olympic gymnast Danell Leyva’s personal Tumblr. If that doesn’t strike you as the typical call to action from someone in the public eye, that’s because Leyva is anything but typical. The two-time Olympian is a colorful figure in the gymnastics world, known for showing his emotions, (good or bad), and always having his celestial lucky towel in tow during competitions. He is also an outspoken self-proclaimed feminist, LGBTQ ally, and general nonconformist. In an Olympic Games that has been called out for numerous sexist moments, Leyva stands out as a refreshing and unlikely figure.

A quick scan of all things Leyva, and you'll find enthusiastic reblogging of feminist-centric topics, such as supporting safe and legal abortion and the amplification of body positivity. You’ll find support for people of color and LGBTQ communities, alongside positive promotion of female (and male) athletes he shares the Olympic and world stage with. You'll also see patient answers to sometimes offensive questions about his sexuality (he’s straight). On Tuesday, Leyva, 24, who won the Olympic bronze medal in the all-around in 2012, will compete in two event finals: parallel bars, where he is a former world champion, and high bar, where he is the reigning world silver medalist.

Leyva openly welcomes the tough questions on his blog, and does the same when it comes to the sports media. As the U.S. men have struggled in Rio, Leyva did not pause before handing due credit to his more successful counterparts on the women’s team. When asked by USA Today about being in the shadow of the women’s program, Leyva responded that he had no issue with that.

"Not only do they deserve all of the attention they get because they have all of that success, (gymnastics) is one of the only places in the world that they’re given the recognition they deserve, It’s just so powerful to see women like that get praised the way that they do,” he said, adding, “That could just be the feminist in me, though.”

The Cuban-born Miami resident doesn't just throw the word "feminist" around for show or attention. In interviews, he is often refreshingly fearless, if not sometimes reckless. Leyva always tells you unapologetically what he’s thinking in that moment.

For example, Leyva was asked by popular gymnastics podcast GymCastic host Jessica O'Beirne in a 2015 episode whether he felt that the FIG — the international governing body of gymnastics — should move FIG-sanctioned world cup competitions out of the nations where citizens don’t have equal rights. Leyva, who had advocated in support of a gay teammate to move the 2015 U.S. Gymnastics championships from Indiana to another location after the state passed discriminatory legislation, answered simply, “I’m going to say yes, that is what we should do. That is the type of action we need to take to make an actual change.” He added later, “I’m still a little heated that championships are in Indiana.”

It’s the kind of confidence that could only be portrayed by an athlete who has found unlikely success in a sport that was not built for him. As a child, Leyva became transfixed by gymnastics. His mother, a former gymnast herself, took him to a class. But he was discouraged from pursuing the sport. He didn’t have the right body type, and he didn’t have the right mental focus. Leyva recalls in a 2016 NBC story, “I did one class, and the coach came up to my mom, and he goes, ‘Please don’t bring him back.’ Apparently I was so bad at focusing and paying attention, I was just all over the place… So, that was like a good indicator to my mom that, she was like, ‘Maybe he’s not gonna be a gymnast.’”

Leyva's love for the sport, not to mention his stepfather Yin Alvarez’s love for Leyva, led to Alvarez, a former gymnast for Cuba, to take up coaching Leyva himself. The duo have weathered the ups and down of Leyva’s career, from being a world champion and Olympic bronze medalist to Leyva initially being left off the 2016 Olympic roster. Leyva was brought in to the team for Rio to replace the injured John Orozco, and he is determined to make the most of his second chance at an Olympic dream. Relegated to a specialist role (on P-bars, high bar, and pommel horse) for these games, today is his last chance to take home a medal.

His swagger and colorful antics have made Leyva a must-watch on the podium, but it’s his talent that has quietly made him the most decorated U.S. men’s gymnast these past four years. Regardless, gymnastics may only be the catalyst to Leyva’s eventual goal of making the world a better place.

"I don’t have that big of an impact on the world yet,” Leyva told GymCastic in 2015, “Hopefully I become super famous so I can use that to try and help change things. It can be better. We can do better."