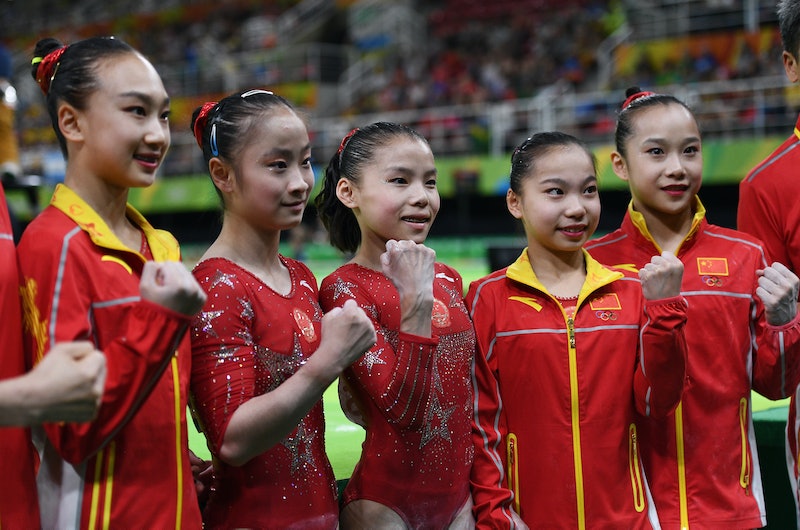 While the Final Five teammates’ (Simone Biles, Laurie Hernandez, Madison Kocian, Aly Raisman, and Gabby Douglas) camaraderie has won America’s heart with fun Instagram posts, support on social media, group interviews, adorably nervous parents, and huddles and hugs at the competitions, it has also left fans wondering if other Olympic gymnastics teams are as close. What about Chinese gymnasts Tan Jiaxin and Shang Chunsong, are they friends?

When watching the competitions and ceremonies, the Chinese team doesn’t seem to engage with one another like U.S. team. Though, you can see them chatting and gearing up side by side. But, the lack of hand holding probably has nothing to do with how the women feel about one another. When the pressure is on during competition, sometimes you don’t feel like gabbing with your teammates and high-fiving on the sidelines. I mean, things can get intense before showtime at the Olympics, just look at Michael Phelps’ game face (if you ask me, he sort of looks like a Jedi being taunted by the dark side). So, the lack of cheeriness during the competition is not an indicator for behind-the-scenes friendship.

The Chinese women’s team also has less of a social media presence and, in the United States, less coverage. Gymnastics fans in the United States are less likely to get to know what the Chinese team is like off the mat. Most of the coverage is in context to Team USA. But, some focus should actually be on the athletes' incredible stories, and no one has a better one than Shang Chunsong.

According to the South China Morning Post, Chunsong grew up in a remote village in the Hunan province. Her family often went hungry and could not afford heating. Chunsong’s childhood commute to school involved the Olympian “traversing a mountain on the shoulders of her partially blind brother.” The article reports that, in order to support her training financially, Chunsong’s brother had to stop attending school. Now, the athlete’s winnings support her family. So, when she loses, the pressure is on. This is likely why Chunsong took her loss in Rio especially hard. A video of Chunsong crying with a teammate beside her, likely saying something comforting, (video below) led to an outpouring of sympathy in China, according to Mashable.

After the video made the rounds, Chunsong had a message for her family at home. According to the same South China Morning Post article, Chunsong said, “I just want [my family] not to worry about me. I am fine. I have not made my dreams come true and I will keep going to make it happen. I want to tell them to take good care of themselves and just don’t worry about me.”

While Chunsong did not win individually, the Chinese team did win bronze in the women’s team all-around. And, while the spotlight wasn’t on the Chinese team during the ceremony’s broadcast in the United States, it doesn’t mean that the team doesn’t share a closeness like the Final Five. The Chinese team is just that, a team. They work together, and see one another through failures and successes, and hopefully we'll get to see them again in 2020.