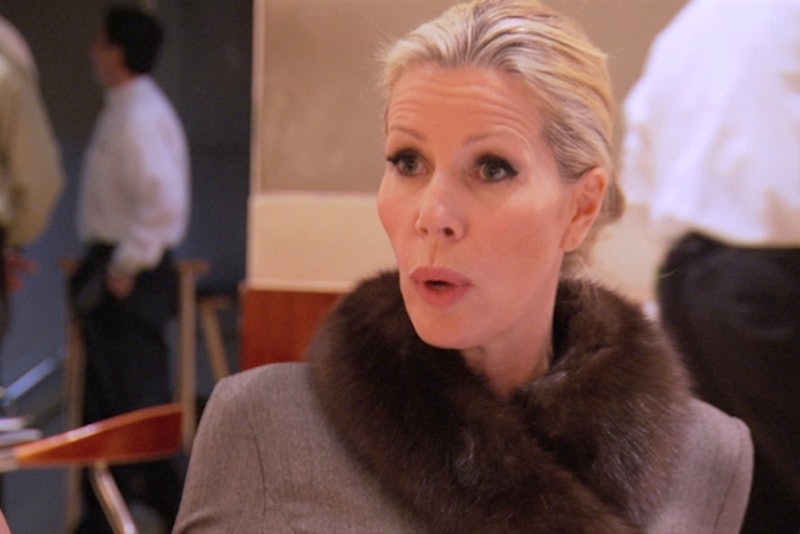 I think we can all agree that The Real Housewives of New York Season 6 started off quite uneventfully by Real Housewives standards. I mean, Carol getting photographed for her "About the Author" head shot? Zzzzzzzz. But fear not, Bravo audience. As the non-confrontational Carol shook her head to tell Heather no, she absolutely did not want to talk to Aviva, due to her "bad energy," we got that all too familiar inkling, and we think that we may have just recognized the hook of this season: The housewives will be sipping on a very strong mix of Aviva haterade.

That'll teach the Housewives cast member to ruin another book party, as she did last season.

I hate Aviva, you hate Aviva, we all hate Aviva. Case in point, Ramona, the most (and proudly) confrontational person of the group had her feisty self roaring and ready to go despite Aviva's peace offering. Our beloved patron saint of pinot never has any qualms about saying exactly what's on her mind, and perhaps that's why she's one of the only remaining original cast members. (Time to pour one out for Jill Zarin, Bethenny Frankel, and Alex McCord.) God, how we've missed you and your blunt and sometimes brutal honesty, Ramz. Sass reigned supreme this episode and Aviva wasn't about to get a hug from anyone. If there's one thing the ladies of New York are not, it's forgiving.

Though, instead of jumping on the bandwagon and labeling Mrs. Singer as bitchy or cold-hearted (which always seems to be her fated titles), we'd like to salute her for her boldness. In fact, we're delighted that she told the taller woman that she found her to be vicious and mean-spirited. It was a breath of purified air, on a show that thrives on the castmates' willingness to be phony. The women on Real Housewives are all too ready to "pretend" to put things past them, all the while tearing each other to shreds in interviews. When Ramona told Aviva she didn't think they could be friends because she just didn't like her as a person (ouch), it was perhaps one of the series' most shining moments — because it felt real. (Of course, being that this is, you know, a reality show, it probably wasn't.)

So what's the deal with Aviva? Is she as sorry as she professes? Do all of the girls hate her just because the ring leaders do? And why the hell is Sonja so forgiving of her? Something in the Upper East Side smells fishy to us. How can she so quickly go from drama-stirring to repentance? Was it because Aviva realized she was being squeezed out of the inner circle, and, in effect, the show? We feel some serious drama brewing and we're way too excited about it. Bring on episode 2, Bravo.