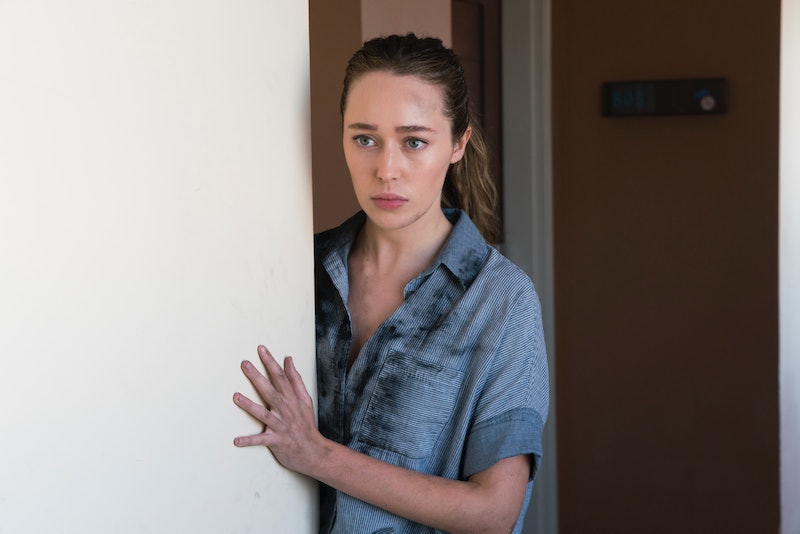 Fear The Walking Dead is almost back, but it's not time for Season 3 already. Though the characters are exploring a new world, the show is returning on Sunday to finish up the second season. In case you've been blinded by Negan rage on the original series, let's recap Season 2 of Fear The Walking Dead so far.

In Season 2, the Clarks, Salazars, and Manawas boarded Strand's yacht and hit the seas with the strange man. Not everyone trusted Strand at first, but his leadership was firm and not to be tested. The gang met some interesting groups of people in Season 2 on land and on the water. They learned more about the walkers. Eventually, Strand revealed that their ultimate destiny was Mexico, which is where we left them in the midseason finale.

Chris, Madison, and Nick all explored their dark sides this season. Watching that happen to characters like Carl and Carol on The Walking Dead is always one of the best parts of the series, so I'm enjoying seeing those dark origins again on Fear. Sweet Travis still seems to be the biggest holdout. With both of her parents now gone, I would keep eye on Ofelia. Other than that, here are some of the highlights to remember from Fear The Walking Dead Season 2.

Pirates Of The Pacific

From a certain point of view. Poor Alicia just wanted someone to talk to, and she got long-conned into revealing her location to a group who attempted to hijack the Abigail. The group was finally tested, and somehow ended out on top.

Flight 462 and Fear The Walking Dead collided, and brought us the resourceful Alex. In somewhat of a twist, she isn't exactly on the side of our protagonists.

We learned in Season 2 that Strand was in a romantic relationship with Thomas Abigail, a wealthy and eccentric real estate mogul who owns the yacht and a private, secure villa in Baja, Mexico. Did Strand really love Thomas, or was he scamming him? He's a complicated character, and I can't wait to see what else we uncover about him.

Nick Got A Gory Hobby

The old "cover yourself in blood and guts" disguise has been perfected by Rick Grimes' crew on Fear The Walking Dead. However, nobody has developed an affinity for it quite like Nick on Fear. He is fascinated with understanding the walkers, and seems to enjoy walking among them. Is he just curious, or losing his mind? Somehow, I have a feeling that he'll outlast them all.

At midseason, the gang got separated yet again. Nick's going on walkabout. Travis and Chris are on their own adventure as well. That leaves Madison, Alicia, and Strand to fend for themselves — which I think they're totally capable of, don't get me wrong.

After a relatively chill season, many characters died in the Season 2 mid-season finale. Fear The Walking Dead said goodbye to Celia, Luis, and Thomas, and probably Daniel. As the season returns and draws to a close, it's possible that more casualties could be on the way.