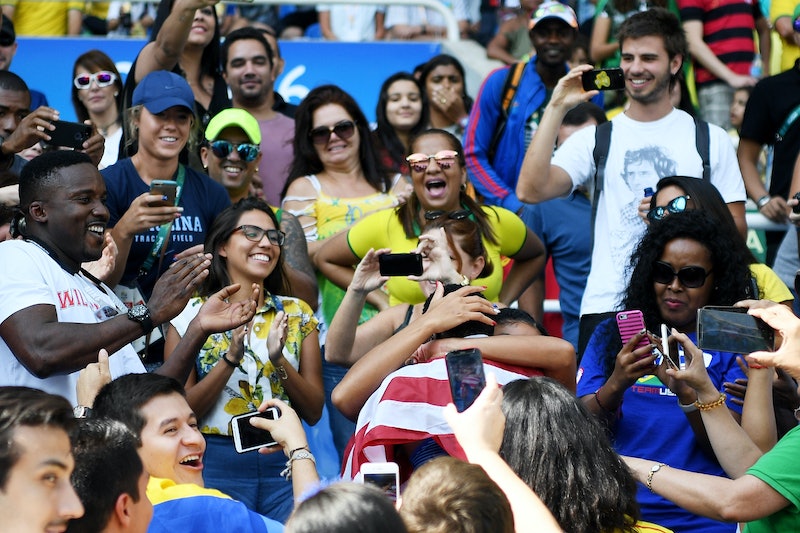 For the second Olympics in a row, American track athlete Will Claye won a silver medal in the triple jump as his teammate Christian Taylor won the gold and defended his Olympic title. Then, Will Claye jumped into the stands and proposed to Queen Harrison, his girlfriend of roughly four years. An Olympic athlete herself, Harrison started crying, and said yes. Consequently, she and Claye joined several other Olympians who have gotten engaged during the Rio Games. This begs the question — why do people get engaged during the Olympics? For Claye, at least, the answer was simple: "It was just a heartfelt moment to have so many eyes on us," Claye told The Washington Post, "and for it to be such a special moment for the both of us."

This year, the Olympic proposal trend started when Marjorie Enya proposed to Brazilian rugby player Isadora Cerullo. "I wanted to show people that love wins," Enya told BBC Sport after Cerullo said yes. "The Olympic Games can look like closure but, for me, it's starting a new life with someone." They aren't the only ones showing the world that love wins, either. More recently, British race walker Tom Bosworth proposed to Harry Dineley, who is now his fiancé.

But the concept of public marriage proposals — particularly at the Olympics — has been somewhat controversial. Chinese diver Qin Kai came under some fire when he asked his teammate He Zi to marry him right after she had won a silver medal. Why? Because it seemed as though he was drawing attention away from her athletic accomplishments, especially because some outlets reported that the engagement ring was an "even bigger prize" than her medal. But He Zi did say yes, and the pair received a fair amount of positive coverage as well.

This is not a new debate, though. It's true that there have been a number of Olympic proposals in Rio, but this summer's Games are by no means unusual in that regard. After the 2012 Olympic Games in London, for example, people were talking about the record number of proposals that had taken place. There was Olympic rowing champion Pete Reed, for example, who proposed to his girlfriend Frauke Oltmanns during the Closing Ceremony. He and his fiancée were both thrilled, and the moment seemed like the right time. "I had my guys there with me," Reed told Daybreak, a British morning program, after the proposal. "It was in the middle while everybody was having a big party, I managed to find my way into the crowd and did it all properly."

Also in 2012, there was British pole vaulter Holly Bleasdale, who accepted a proposal from her boyfriend Paul Bradshaw after coming in sixth place. What started out as a disappointing moment turned into an "epic day," Bleasdale tweeted after the proposal.

The controversy around Olympic marriage proposals seems to have a lot to do with timing. In Bleasdale's case, the proposal from her boyfriend turned a disappointing loss into something much more positive. In Claye's case, he wanted to celebrate his accomplishment with Harrison, who overcame her own disappointment about not qualifying for Rio to attend the Games and support her now-fiancé. The case of He Zi and Qin Kai possibly generated more controversy because the proposal took place right after He Zi's moment in the Olympic limelight, and then generated more headlines than did her athletic achievement.

So what we're seeing in Rio in 2016 is nothing new, and Tokyo in 2020 will probably see its own share of proposals. For many of the athletes who have proposed or accepted proposals during this summer's Games, it seems that these proposals are a way of sharing their happiness and celebrating their accomplishments with someone they care about deeply. If that is indeed the case, it's really not all that surprising that they would choose the Olympics as their stage.