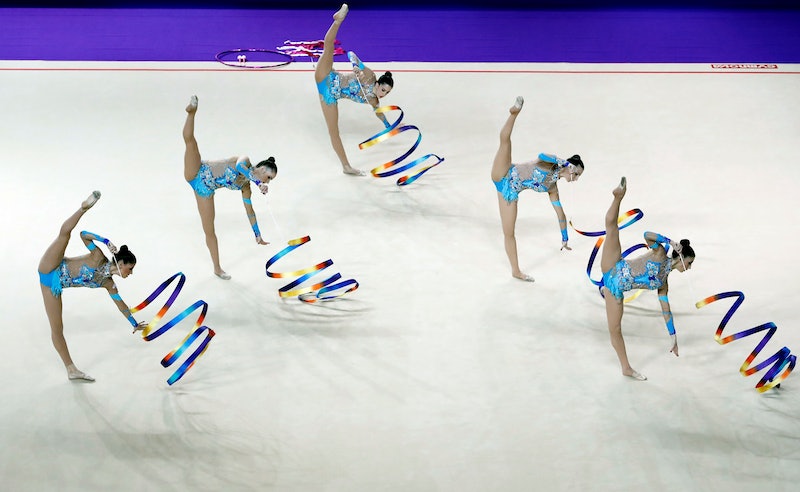 The Events Are Floor-Based

Don't expect to see any uneven bars or balance beams in Friday's qualifying rounds. In rhythmic gymnastics, every routine takes place on what looks like an artistic gymnastics floor apparatus. Although rhythmic gymnasts compete in multiple events, each apparatus is used in a routine done on a floor. Competitors twirl ribbons around themselves as they leap through the air and toss hoops, clubs, and balls into the air while they tumble and dance throughout it all.

Grace Is Just As Important As Power

Don't get me wrong: Rhythmic gymnasts are athletes who train for years to perfect their skills — but rhythmic judges aren't looking for any of Friday's competitors to launch into a floor-wide tumbling pass that ends in the "Biles." Rhythmic gymnastics places more emphasis on the sport's dance element than artistic gymnastics. The tricks that rhythmic gymnasts perform in Rio may require just as much skill and technique as the ones you saw from the Final Five — but they won't necessarily look the same.

Team USA Is The Underdog

Whereas Americans have come to dominate the world of artistic gymnastics in recent years, rhythmic gymnastics hasn't necessarily evolved the same way. Russia tends to own the sport, and this year's U.S. team will not enter Friday's competition with the same odds as the Final Five. That's not an invitation to change the channel, though. In the individual competition, Zeng has the potential to place higher than any American before her if she can crack into the top 10. This year's team also has a good shot at topping their predecessors. They are only the second American team in the history of Olympic rhythmic gymnastics to qualify for the Olympics — and the U.S. qualified automatically the first time around because the event was being held on American turf in Atlanta in 1996.

The U.S. artistic gymnastics program has had its fearless leader, Martha Karolyi, to thank for much of its success in recent Olympics. And though the team has its own separate set of coaches, team members did train at the famed Karolyi ranch earlier this year. Additionally, rhythmic gymnastics leaders seem to have taken a similar approach to their program as Karolyi, working to make the team more cohesive, more competitive, and more serious. Still, they are a team all their own — and separate from the famous American artistic gymnastics team.

Karolyi effect or not, the rhythmic gymnastics team has the opportunity to set a new standard for the sport, at least in the U.S. In doing so, they could only add to the dominance started by their artistic gymnastics counterparts. The rhythmic competitions begin on Friday and continue through Sunday.