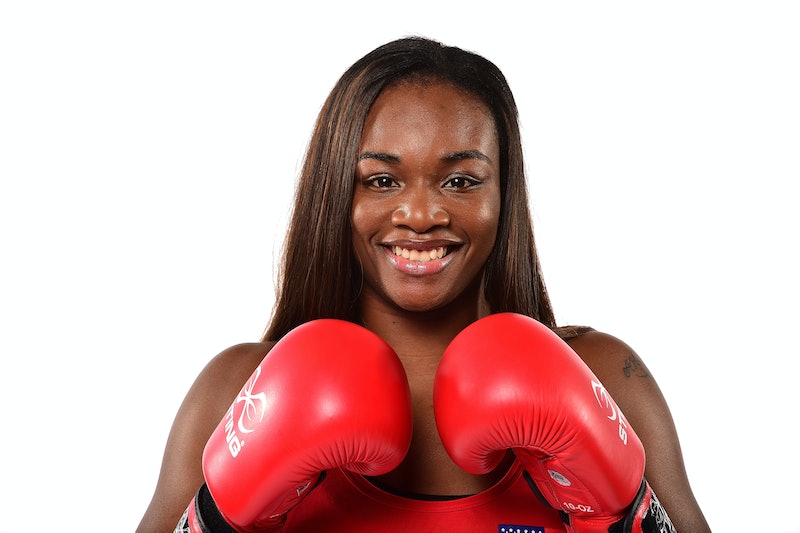 Women's boxing first became an Olympic event in 2012. That year, Team USA boxer Claressa Shields, whose life story helps explain her inspiring determination, became the first American woman to win a boxing gold medal when she took home the Olympic middleweight title in London. But Shields' life story and journey to the Olympics has not been easy. Her story speaks to her perseverance as well as her dedication to the sport.

Shields, who would make history again if she defends her title in Rio and wins back-to-back Olympic golds, is from Flint, Michigan. According to Elle, Shields' father was in prison for seven years, until she was nine years old. Her father was an amateur fighter, and when she was 11, Shields started training to be a boxer after her father told her about Laila Ali — Muhammad Ali's daughter. Her father initially discouraged her, Elle reported, saying that "boxing was for men, not women." But Shields persisted.

Boxing was an important outlet for Shields, who explained to Elle that it helped her manage her anger. She had a lot of reasons to be angry. During her conversation with Elle she said she had been raped and molested when she was as young as five years old, and grew up surrounded by poverty and violence — but none of this stopped her from giving her all to her sport, and her efforts paid off.

I was bullied in elementary [school], I was neglected by my mom, and I was hungry a lot. I was angry because I see other kids with things that I wanted: they had good parents, they had clothes, they always had food and extra money, and I wasn't one of those kids.

I always tell my story because I want others who have felt broken to know they can make it. I come from one of the worst cities in America. I had very little help from 11 years old to the games. [I want to show] it doesn't matter what you went through in the past — raped, molested, being poor — all that stuff doesn't matter because if you chase your dream, something's going to happen. I put 100 percent into boxing and that's why I am where I am now.

Ever since she started training at age 11, Shields has had the nickname "T-Rex" because, as she told ESPN, "Back when I was younger, I was very skinny and I had short arms, but I used to always be swinging." That's how the documentary T-Rex got its name, too; it chronicles her journey to an Olympic championship. Shields added that boxing gave her self-confidence, and helped her come out of her shell to figure out who she really was.

Shields has had to make a lot of sacrifices to get to where she is. Growing up surrounded by poverty in Flint meant that she was constantly looking after her siblings, even giving up meals from time to time to make sure they got something to eat. But Shields told ESPN that "without that struggle, I don't think I would be as strong as I am." The 21-year-old boxer has helped pave the way for other female boxers in a sport that is still largely dominated by men. Even if Shields doesn't defend her title at the Rio Olympics, she has already played an important role in boxing history — not only because of her gold medal, but also because of how much work she has put in to get herself this far.

But boxing in the Olympics has never just been about the medals for Shields. She's also working to move her family out of Flint, and to tell her story so that the girls and young women who come after her might be inspired. "I think about the people that are relying on me and the people I give hope to," she told Elle. "And I think about the big goal: to go down in history as one of the best women's fighters to ever live." She's already well on her way there.