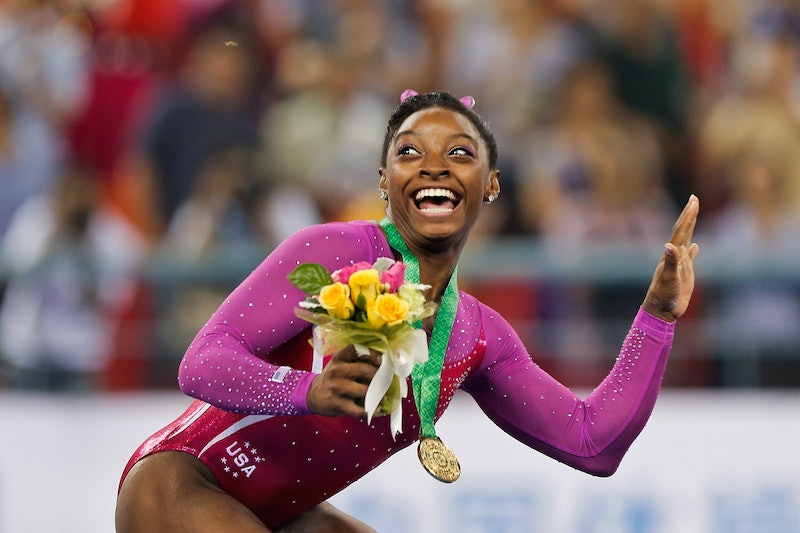 A long, long time ago, before Simone Biles was a four-time gold medalist at the Olympic games in Rio, she was busy collecting her second consecutive gold medal in the individual all-around at the 2014 World Championships in Nanning, China. It was during this moment that Biles was also chased by a bee — and ran all over the podium trying to escape its buzzing death-grip.

The black-and-yellow devil bug happened to be in the bouquet of flowers she was holding (as pointed out by Romanian gymnast/silver medalist Lorisa Iordache), and Biles immediately began trying to shake the bee right on outta there. Unfortunately for her, this only pissed off the little guy and prompted him to seek his evil, bee-like revenge on Biles, chasing her all around the podium and causing her to straight-up drop the flowers and (adorably) squeal in fright. The best part about the whole thing? The announcer just kept on, well, announcing, even though Biles also set in motion a panic from Ioardache and bronze medalist/former Olympian Kyla Ross as well. I mean, bees are no effing joke. Doesn't anyone remember My Girl? (RIP Thomas J.)

While Biles' iconic ~bee incident~ is now two years old, you can imagine that it's once again gaining traction now that the gymnast is a household name and is the reigning Olympic champion in the individual all-around, vault, and floor events (of course, she also scored the bronze medal in beam and helped propel the Final Five to victory in the team all-around).

It's one of those moments that just makes her super relatable, as anyone who has ever been in uncomfortably close contact to a bee can attest. I'm personally having flashbacks to my six years as a camp counselor, during which I would flail around screaming if a bee flew near me, leaving my campers to fend for themselves (sorry guys). It's a silly moment — one fortunately captured on video — that proves that while Biles may be leagues ahead of everyone in gymnastics, she's still just a regular ol' teen who would rather run off the podium in her crowning moment than risk being stung by a bee. I feel that.

More like this
Jake Daniels Just Became The UK’s First Active Football Player To Come Out As Gay Since 1990
By Sam Ramsden
What Is Jeanie Buss' Net Worth? The Lakers President Is Uber Rich
By Hugh McIntyre
Laura Dern Said “Cultural Awareness” Made Her Rethink This 'Jurassic Park' Fact
By Grace Wehniainen
A Royal EastEnders Cameo & All The Other Platinum Jubilee Telly To Have On Your Radar
By Rachel Mantock
Get Even More From Bustle — Sign Up For The Newsletter