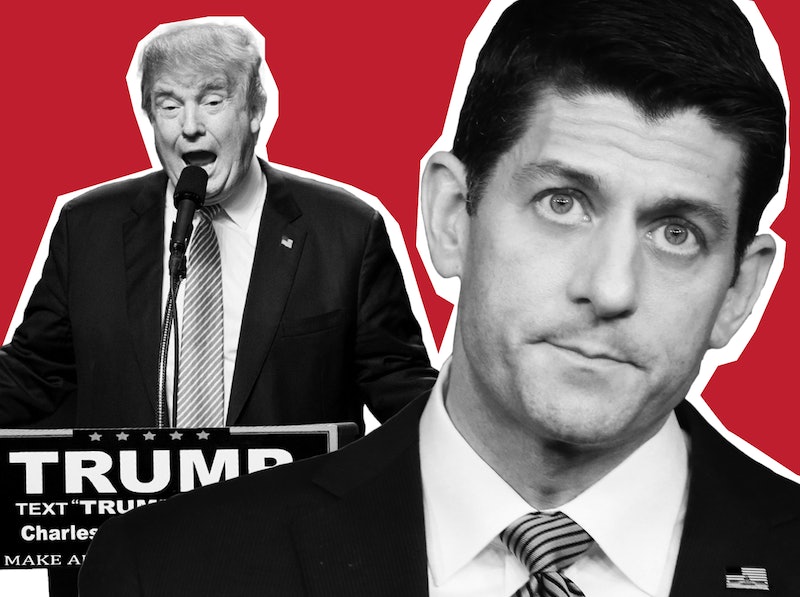 Saying that the Republican Party has had an uneasy relationship with their presidential nominee is like saying a fireworks factory has an uneasy relationship with a box of matches. Despite many efforts by Republican leaders to get Donald Trump to follow and fall in line with the party, the wily candidate seems to buck them at every turn, whether it’s prevaricating on endorsing the Speaker of the House or claiming that President Obama founded ISIS.

Still, there are calls in Washington, D.C. and elsewhere for the Republican National Committee to stop supporting Trump’s candidacy. Many of these calls center on the idea that Trump’s tilt-a-whirl of a campaign may end up hurting down-ticket Republican candidates in November. But the convention has come and gone, and Trump is definitely definitely the party’s candidate. So what could the RNC do to distance itself from the very man they nominated?

First off, short of Trump voluntarily relinquishing the nomination, the RNC is stuck with him. The only viable path to forcibly ousting Trump would be to try to use the obscure Rule Nine to declare he isn’t of “sound mind." Aside from the political discomfort of declaring crazy a guy they were rallying around less than a month ago, the move would undoubtedly alienate the millions of Republicans who voted for Trump in the primaries.

The RNC could also try to make things so unpleasant for Trump that he decides to resign voluntarily, but that also would most likely involve a lot of media-unfriendly news cycles.

The most effective way that the RNC could show it has given up on Trump would be to reroute money currently going to his presidential campaign elsewhere. More than 120 current and former Republican elected officials signed a letter to the RNC asking that the committee stop funding Trump, which read in part:

Given the catastrophic impact that Donald Trump's losing presidential campaign will have on down-ballot Senate and House races, we urge you to immediately suspend all discretionary RNC support for Trump and focus the entirety of the RNC's available resources on preserving the GOP's congressional majorities.

We believe that Donald Trump's divisiveness, recklessness, incompetence, and record-breaking unpopularity risk turning this election into a Democratic landslide, and only the immediate shift of all available RNC resources to vulnerable Senate and House races will prevent the GOP from drowning with a Trump-emblazoned anchor around its neck.

While it’s unclear exactly what the effect of such a move by the RNC would be, the unorthodox Trump campaign has so far been fairly limp in putting together a nationwide organization, relying largely on the RNC’s network. Still, that hasn’t stopped Trump from lashing out at the Republicans calling for the RNC to bail on him.

Regardless, it’s more clear than ever that we are in uncharted political waters. The biggest question now is: Can the Republican party stay afloat?