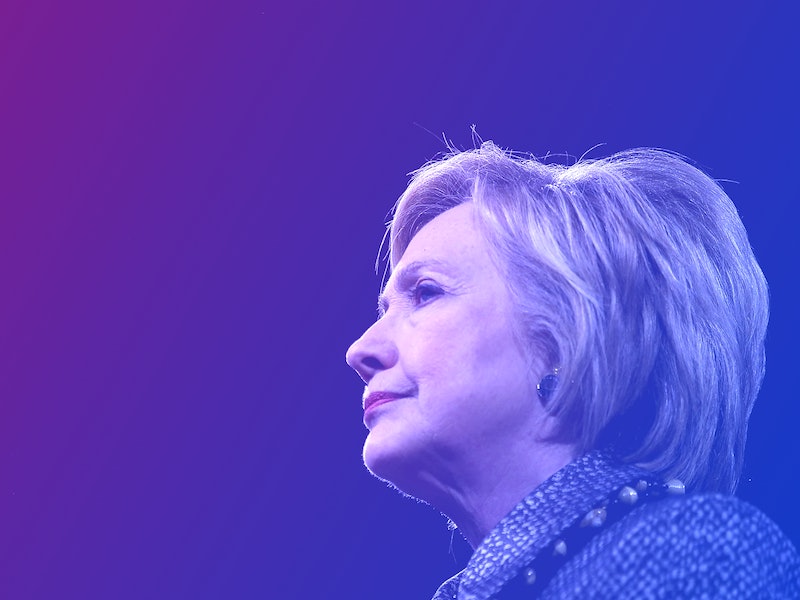 It turns out, despite evidence that tends to suggest otherwise, Hillary Clinton is not superhuman. It's true — Clinton, like other mortals, has been sick before. Now, in the latest overblown conspiracy theory, Donald Trump is taking this truth and claiming that Clinton's health makes her unqualified to be president. During a speech Monday (that was largely demoted by his proposed immigration ideology test), Trump said, he Democratic presidential nominee and former Secretary of State "lacks the mental and physical stamina to take on ISIS. And all of the many adversaries that we face."

Here's the background: in 2012, Clinton got the flu, which left her dehydrated, caused her to faint, and landed her with a concussion. In December of that year, she went to the hospital where doctors found a blood clot. True to Trump, he's making the years ago event into something it's not and letting it take him and the Republican party wherever his wind may blow.

After the hospital stay, Republican strategist Karl Rove got a head-start on interfering with her potential presidential campaign prospects by theorizing that there's more going on than a blood clot — even declaring that Clinton might have a brain injury and conveniently mentioning that that would make her unfit to serve. "Thirty days in the hospital? And when she reappears, she's wearing glasses that are only for people who have traumatic brain injury? We need to know what's up with that," Rove said in 2014, according to the New York Post.

Now, the accusations have resurfaced in a new, more abstract package: Trump has taken a mustard seed of truth (that may be generous) and turned it into a conspiracy theory that onlookers are left to try to piece together and guess the origins of the accusation.

In an "exit interview" on CNN with Clinton towards the end of her time as Secretary of State in 2013, questions come up about her health and the blood clot she had during her time in office — reminding her that, if she decided to run for president, she would continue to not be invincible. You can watch the whole thing here:

Accusing Clinton of not having the "stamina" to lead the country is sort of like another recent Trump accusation, that President Obama and Clinton are the founders of ISIS. Earlier this month, Trump expressed that concern seriously, except he was being sarcastic, except he meant it literally. Trump's new tinfoil-hat-accusations about how Clinton's health are almost worse (although I'm not sure in the scheme of things what could compare to being accused of founding one of the most horrific terrorist organizations that have ever existed) because of the sneaky misogynistic undertones. It's all to clear to me that suggesting Clinton lacks "stamina" is a way to convey the idea that because Clinton's a woman she's weak.

Unlike Trump, I have every faith that Clinton does have the stamina to be president — and to blow right past garbage conspiracy theories.