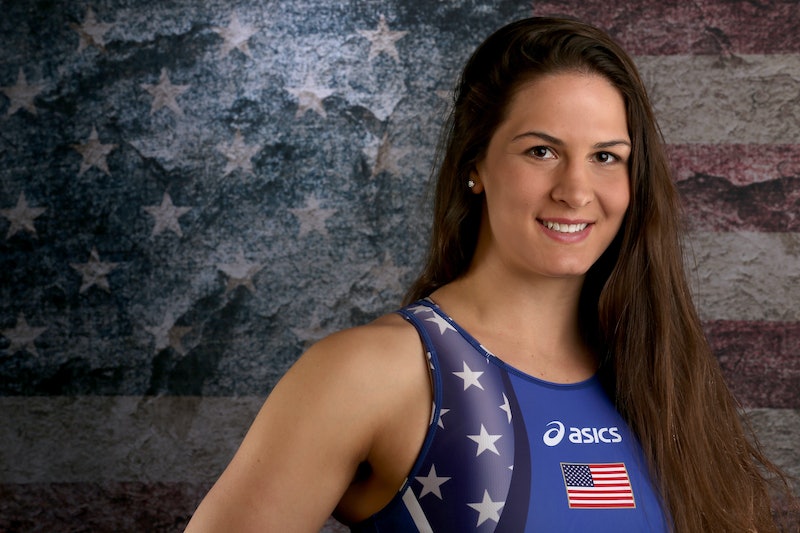 On Thursday, Aug. 18, the 75kg women's freestyle wrestling tournament at the 2016 Summer Olympics in Rio will be taking place, from the round of 16 all the way to the gold medal match. You'll get to see some of the most exceptional wrestlers from across the world — from Brazil, Japan, Estonia, Cameroon, Canada, Colombia, France, Belarus, Germany, China, Kazakhstan, Venezuela, Hungary, Russia, Egypt, Ukraine, Turkey, and the United States — face off with a chance at Olympic gold on the line. But maybe you should get to know America's big hope in the tournament first: superstar Adeline Gray, who credits MMA star Ronda Rousey with helping pave the way for her career.

Gray is considered a strong contender for a gold medal this year, as she's riding a two-year winning streak. And, with dreams of Olympic gold no doubt on her mind, she's nonetheless taken some time to acknowledge one of the most famous fighters in the world, for helping her embrace her athletic destiny. As Les Carpenter detailed for The Guardian prior to the round of 16 on Wednesday, the 25-year-old from Denver, Colorado, said that Rousey was able to "shine a spotlight," one that led the way for her to pursue her dreams, even though she admitted she personally lacks some of Rousey's sharp edge.

I think it takes someone to shine a spotlight, and I think she did that ... I don't agree with how she went about it, that's not how I would have done it, but I thought she did it well. I think there's definitely a more tactful way she could have done it, but at the same time there's a lot of bigotry that goes on in women's sports and women's combat sports.

Specifically, Rousey's helped inspire Gray (and countless other young women and girls getting into combat sports) with her unapologetic pride in her athletic calling, and in her own body. Back in 2015, she defiantly stated that she wasn't "a do-nothing b***h," a controversial turn of phrase that also cut against decades of gendered stereotypes and cultural norms about femininity, beauty, and fitness.

Her willingness to broadcast this confidence reportedly helped Gray break through some of the tensions and doubts she'd sometime have about herself, and she's tried to pass that on to the younger women and girls who train with her back home.

It was good for me to teach young girls that you don't have to shy away from combat sports because you don't want lose your femininity. I don't feel like I lost any of mine.

If you're eager to see Gray compete, rest assured you're not alone. Her first match, in the round of 16, will be taking place at 9:16 a.m. ET, and she'll be going up against Andrea Olaya of Colombia. Needless to say, you can never be sure whether a gold medal is in the cards ahead of time — talent is one thing, and execution is another. But if Gray manages to topple Olaya, she'll be moving onto the quarterfinal round at 11:00 a.m. ET, followed by the semifinals at 11:32 a.m. ET, then the final at 5:35 p.m. ET. Do yourself a favor and make sure you don't miss it!