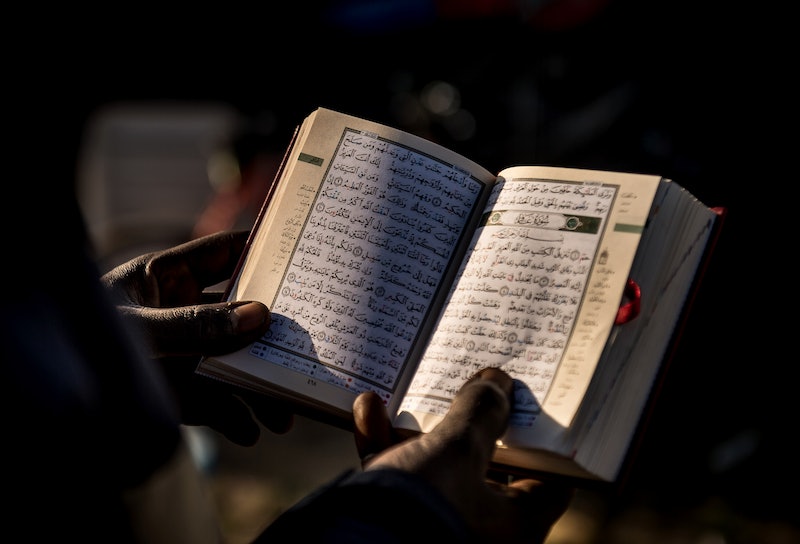 On Tuesday, a photo of a tote bag featuring Arabic writing went viral on Twitter after a metro-rider sported it in Berlin. It makes a most pithy statement — the text reads, roughly translated: "The only goal of this text is to spread panic among those who fear the Arabic language." Of course, only those who know Arabic are immediately aware of the bag's upfront message, while those who don't either wonder what it means or experience the precise fear, which happens to be rooted in ignorance, that the bag mocks. It's a real conversation-starter, and the creators of the Arabic text tote bag intended to make a statement with it when they originally began producing the bags out of Haifa, Israel. From there, they brought it to Germany.

The bag's presence in Berlin comes at a time when Islamophobia is on the rise in the wake of recent large-scale terror attacks in neighboring France as well as the influx of refugees from Syria, Afghanistan, and Iraq. Reuters reported that a 2016 study found that about 40 percent of Germans surveyed said Muslims shouldn't be allowed into the country — double the number that had made the same claim back in 2009.

The tote could certainly start some meaningful conversations in Germany, where Muslims comprise about 5 percent of the population, and in other western countries where many citizens' fear of terrorism has turned into warped attitudes toward the Middle East, Islam, and those who practice it. The graphic design and print shop that created the bags, Rock Paper Scissors, recently traveled to Berlin on Aug. 14 to showcase their products, including the Arab text tote bag. But the creators of the bag had in mind a message particularly relevant to their home country.

Haitham Charles Haddad and Sana Jammalieh started Rock Paper Scissors to provide locally-made clothing to the people of Haifa. The designers told the Australian news site SBS, "While fuddling what to write we came to a conclusion that the existence of the font and language — and not necessarily the writing — is what's important." They expressed the fear that the Arab-Israeli conflict threatens to wipe out their language, which is an important part of Arab culture. "We notice here that the Arabic language is starting to disappear from signs and public places," the designers said. The Israeli newspaper Haaretz did report earlier this year that electronic bus signs in the city featured Hebrew only for a period of time.

The tote bag isn't their only politically-motivated product; some of their creations contain messages against sexual and gender-based violence, SBS reported. But with the tote bag, they realized that the basic presence of the text made a point in itself: "[T]oday, where we live, anyone wearing a t-shirt with Arabic words on it is a political statement."

The anti-xenophobic message of the Arab text tote bag is one that needs to be heard far and wide. The bags can only be purchased in Haifa for now, but the designers told their Facebook followers that they are in the process of creating an online store. Keep an eye out for your opportunity to sport one of their totes and start a conversation too.