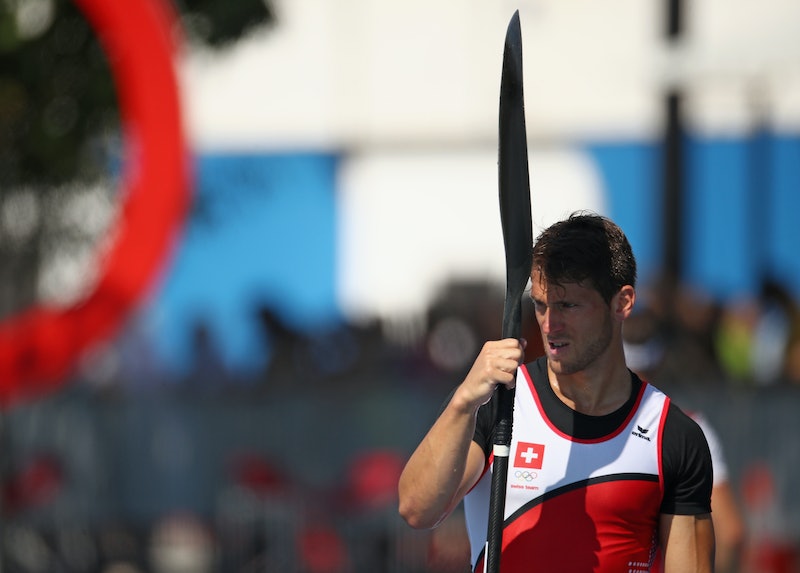 In many ways, the 2016 Olympics have been incredible for women. This year's U.S. delegation included more women than any country in history, women from around the world are dominating sports from swimming to shooting, and athletes like U.S. fencer Ibtihaj Muhammad and Chinese swimmer Fu Yuanhui have shown there's no single way to be a woman or a feminist. Nonetheless, these great gains for female athletes — and for the young women watching them at home — have been met with their fair share of sexism. Canadian Rower Adam van Koeverden called out sexism at the Olympics in a trenchant blog post on Friday, Aug. 12.

The sexism that has characterized this year's Olympics commentary is sometimes blatant. Like when van Koeverden's teammate, Adam Kreek, blamed Canadian tennis star Eugenie Bouchard's loss on her interest in "beauty and fashion," relying on the old idea that traditionally feminine hobbies are somehow linked to a lack of intelligence, talent, or depth.

"After Adam made a few sweeping generalizations about a woman who has gone farther and done more in the sport of Tennis than any Canadian woman in generations, he questioned whether or not she actually wants to win," van Koeverden wrote.

He continued by making a great point about the unfair stereotypes women face, "He even did a girlish impression of her 'trying out different hairstyles,' seemingly as evidence that she isn't focused on winning, or that having an interest in fashion, beauty or anything else might detract from one's performance. Since when is having a pastime a bad distraction?"

Comments like Kreek's are not only limited to men. Women internalize these notions, eventually coming to believe that their tastes and interests are invalid. It's this insidious type of sexism that has made women over the ages declare "I'm not like those other girls!" — with "those other girls" oftentimes being girls who have a lot of girl friends, girls whose interests are traditionally feminine, girls who wear makeup, and so on.

There are plenty of other examples of this type of sexism — the kind whereby incredibly talented women are reduced to little more than their bodies — on display at the Olympics. Think Gabby Douglas being criticized for not smiling, the Chinese gymnastics team's bodies being scrutinized, or female Olympians being called out for wearing makeup. Or worse, of an incredible photo of the German and Egyptian volleyball teams' uniforms being described as a "culture clash." But that's not the only monster we're dealing with here.

Female athletes' skills are being pushed to the wayside, as some commentators focus on their bodies, appearances, and husbands instead. When Corey Cogdell-Unrein won her second bronze medal in women's trap shooting, for example, the Chicago Tribune referred to her as "wife of Bears lineman Mitch Unrein." After Chinese diver He Zi's boyfriend proposed to her — right after she won a silver medal — the BBC called her engagement ring "an even bigger prize."

And when women lose? As van Koeverden wrote, "For a group of sports fans that have really never known a homegrown singles tennis champion, Canadians act as though Eugenie should be winning every time she shows up to play. When she was runner up at Wimbledon, it was widely considered a failure by Canadian fans."

When women win, their victories are quickly overshadowed by their marital status. When they don't win, their losses are blown up by viewers who forget these women are still at the Olympics. Think of the vitriol Douglas received for not smiling during her teammates' competition. Immediately, she was called catty and jealous, with a hashtag — #CrabbyGabby — dedicated to mocking her.

By far, the most important point van Koeverden makes is that it shouldn't only be up to women to call out sexism when they see it. "I don’t think the burden of defense rests solely on the capable shoulders of my female teammates," he wrote. "If men don’t call out men when we are being sexist, then we are not a part of the solution, and the problem persists."

That's not to say that women are incapable of defending themselves, but sometimes calling out misogyny at every turn gets exhausting. Van Koeverden proves that it's not enough to call yourself a feminist; you also have to act like one.