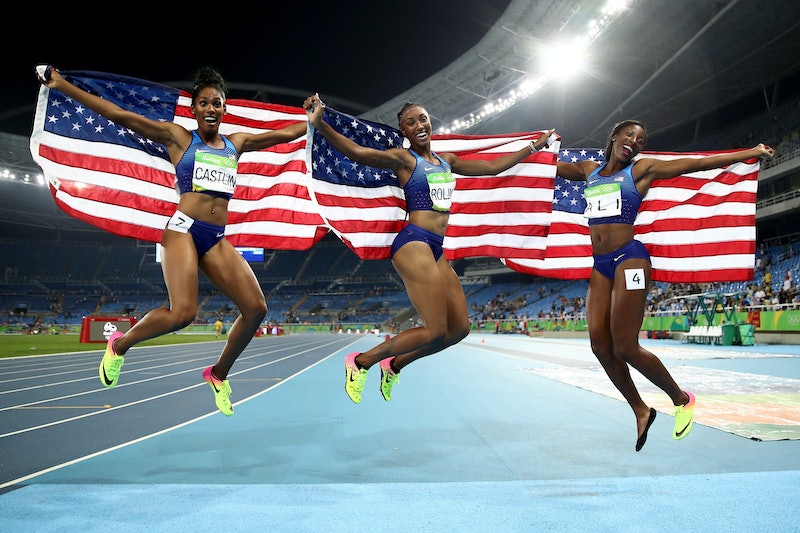 At the Olympics, your teammates are also your competitors. That was certainly the case at the women's 100-meter hurdle race on Wednesday, Aug. 17, where three of the eight competing athletes were from the United States. In an unprecedented victory for the U.S., all three American runners — Brianna Rollins, Nia Ali, and Kristi Castlin — won the gold, silver and bronze medals, respectively, for the same event. In little more than a dozen seconds, Rollins, Ali, and Castlin had made the U.S. the first country to sweep the women's 100-meter hurdles.

The final times for the women's 100-meter race were incredibly close. Rollins cleanly jumped over the 10 hurdles in a quick 12.48 seconds; Ali crossed the finish line shortly afterwards, clocking in at 12.59 seconds; and Castlin clinched the bronze with a time of 12.61 seconds, narrowly beating out the fourth-place finisher, Britain's Cindy Ofili, who finished the race with a time of 12.63 seconds.

"I was blown away seeing the 1-2-3 sweep with the women's hurdles," U.S. sprinter Justin Gatlin told the The Washington Post on Wednesday night. "You would think something like that happens on the collegiate level, but our ladies did an outstanding job to come out here on the biggest stage possible and rise to the occasion as countrymen and teammates and training partners and be able to come across the line 1-2-3.”

After the race was over and the three women had realized their historic win, they immediately jumped up in the air, High School Musical-style. It was an incredible victory for the three athletes, who were both competitors and teammates in this particular event.

The 100-meter hurdles is the first track event the U.S. track and field team has taken home the gold for — until this point, their victories have been concentrated on the field instead. On Aug. 13, Michelle Carter became the first American to win gold in the women's shot put, and on Aug. 17, Tianna Bartoletta won the gold for the women's long jump.

In addition to being a historic moment for the U.S. track team, Rollins, Ali, and Castlin's sweep is a huge defining moment for each individual athlete: this event also marks the first time any of them has won an Olympic medal.

This win is a perfectly-timed gift for Rollins, who celebrates her 25th birthday on Aug. 18. And she should celebrate, because she's definitely earned it.