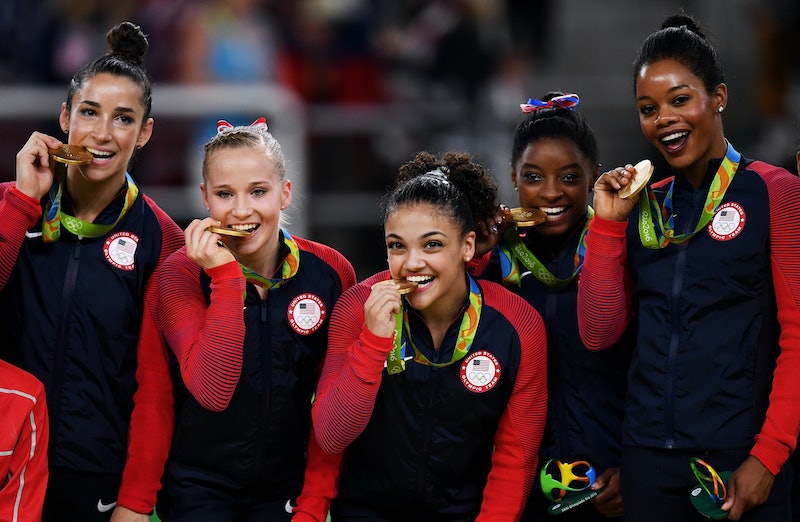 Ever wanted to ask Team USA's Final Five a gymnastics question? Maybe what their usual training routine is, what their favorite song is, or what they do on their day off? Well, some lucky fans got a chance to do just that. Team USA gymnasts answered fan questions during a Q&A session via Twitter under the hashtag #AskFinalFive. The questions, not surprisingly, ranged from hilariously silly to quite serious.

A few Twitter users asked what the teammates' favorite song to perform to is, how close they've become since the Olympics began, and what's next for the team after the Olympics. And of course, there's been more than one request for a follow back on Twitter, a handful of marriage proposals, and even one prom-posal. One Twitter user asked the team — specifically, Simone Biles and Aly Raisman — why they've been "silent on the cyber bullying" teammate Gabby Douglas has received.

Social media has been a transformative force in this year's Olympics. For the first time ever, we're able to follow athletes' every move on and off the field (or court, mat, and pool). Although Facebook, Twitter, Snapchat, and Instagram all existed during the 2012 Olympics, the latter two apps didn't become ubiquitous until long after the last gold medal was handed out in London.

Unfortunately, as Gabby Douglas' recent battle with cyberbullying shows, social media also provides an outlet for angry fans to give — often unwarranted — criticism to athletes they will most likely never meet. Behind a computer screen from thousands of miles away, people feel both protected and empowered.

However, some have also taken to social media to criticize Twitter for prioritizing celebrity questions over those of everyday fans. "Why bother" asking questions that will go unanswered, asked one user. With so many questions — and so many high-profile fans — it was understandably difficult for the team to answer them all.

Nonetheless, the #AskFinalFive hashtag gave fans yet another way to connect to their favorite gymnasts, even if their questions weren't answered. Given the popularity of the Q&A session, maybe they'll even do another.