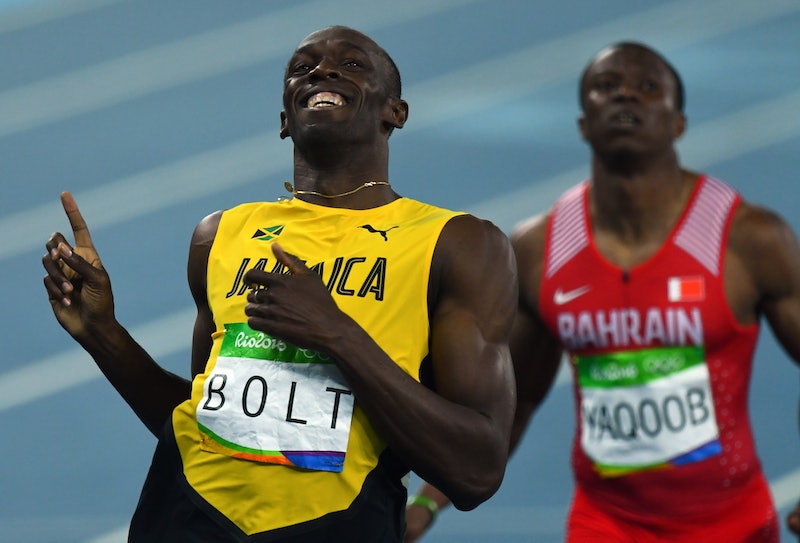 At this point, it's safe to say there is no doubt that Usain Bolt is the fastest man in the world. The Jamaican sprinter won his seventh Olympic gold medal on Aug. 15, in a race that was over less than 10 seconds after it even started. Then he cruised through the men's 200-meter semifinal qualifiers on Aug. 17, defeating his competition, only later to admit he was getting "lazy" during the race. But maybe Bolt has finally met his match: a Rubik's cube champion.

Hear me out here: I understand that Olympic sprinting and solving a Rubik's cube are two very different sets of skills. I get it, and personally, I'm capable of neither. But we may have finally found someone, somewhere, who can do something faster than the world's fastest man.

On Monday, Aug. 15, Rubik's cube expert Anthony Brooks went head-to-head with Bolt — sort of. From his living room, Brooks began to solve a Rubik's cube puzzle the second Bolt took off from the starting line — and got all the pieces in order before Bolt crossed the finish line just 9.81 seconds later. "It's not supposed to be that easy, folks!" an announcer cried after Bolt's big win. In this case, that sentiment applies to both Bolt and Brooks.

Bolt currently holds the world record for the 100-meter dash. He set the record in 2009, when he was just 22 years old, clocking in at an astounding 9.58 seconds. No one — not even Bolt himself — has been able to best that time since. Amazingly enough, the world record for solving a Rubik's cube is even less time than that. In 2015, 14-year-old Lucas Etter set a new Rubik's record when he solved the notoriously difficult puzzle in 4.904 seconds. That's less than half the time it took Bolt to run the 100-meter in 2009.

Now for the real question: Could Usain Bolt solve a Rubik's cube faster than Brooks or Etter could run? Who would finish first? It's far-fetched, sure, but it shows just how talented Bolt, Brooks, and Etter are at their respective disciplines.

The men's 200-meter final is scheduled for Thursday, Aug. 18 at 9:30 p.m. ET. This will be one of Bolt's final races — he has previously announced that he'll be retiring after the World Track and Field Championships. And as usual, he won't be aiming for anything less than gold. Maybe he can give Brooks or Etter a call and they can give each other some lessons.