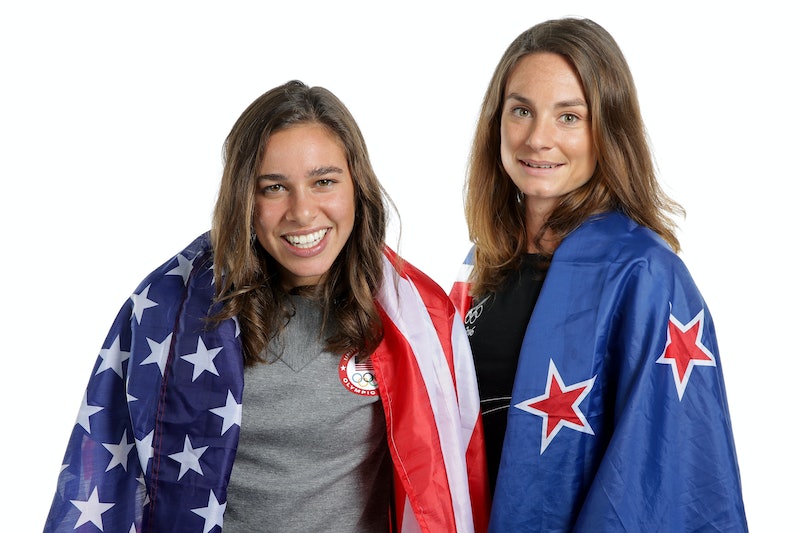 Four laps from the finish line of the first round of the 5,000-meter on Tuesday, Aug. 16, two athletes collided and fell to the ground. New Zealander Nikki Hamblin was in a pack of runners when she lost her footing and tumbled to the ground, ending in a fetal position on the track. U.S. runner Abbey D’Agostino was right on her heels, and tumbled over her competitor. What happens next is remarkable — especially since they were complete strangers. Now, Hamblin and D'Agostino have only now properly met, after their collision.

Back to when they were strangers: On the track, they were both down for a few seconds. The rest of the runners raced past them. Then D'Agostino helped Hamblin up. Things went well for a few seconds, but then D'Agostino was back on the ground, writhing in pain, and Hamblin returned the favor in a remarkable show of the Olympic spirit. She went back and helped her fellow runner get going again. They finished last, about two minutes after the Ethiopian winner of the heat passed the finish line.

On Wednesday, the two athletes actually met. The New Zealand Olympic Twitter account released a photo of the two together. Hamblin also gave her account of what happened to The Guardian:

When I went down it was like, "What’s happening? Why am I on the ground?" Hamblin said after the race. And suddenly there’s this hand on my shoulder, like "Get up, get up, we have to finish this!" I’m so grateful for Abbey for doing that for me. That girl is the Olympic spirit right there. I’ve never met her before. Isn’t that so amazing?

It really is. The two have received a fair amount of attention, and — despite rolling into the finish line last and second-to-last — they were allowed to race in the final. The Olympic judges awarded them for their generous showing of the Olympic spirit.

Only Hamblin will be able to take advantage of the special consideration. D'Agostino was wheeled off the track and was later diagnosed with a torn ACL and strained MCL in her knee. The Associate Press reported that she will meet with a doctor in Boston after the Games before deciding on surgery. Even still, D'Agostino spoke positively about her experience to the AP:

I'm so thankful to be a part of this. It's about the privilege of representing us and being more than just my race performance. What's impressed on me is the symbolism of the Olympics. Of course, I wasn't expecting this. At the same time, (the collision) was clear and a big reason why I was there. We were a part of a message that was being delivered to a lot of people through that race.

The two have met, posed for photos with their respective flags (D'Agostino on crutches), and exchanged contact info. "It's connected us in a way that's powerful,"D'Agostino told the AP. "It's the beginning of a relationship that neither one of us will ever forget. We live on opposite sides of world and our paths won't cross frequently. But we will keep in touch and share our story."

They may not leave with medals, but this story of true Olympic sportsmanship is even better.