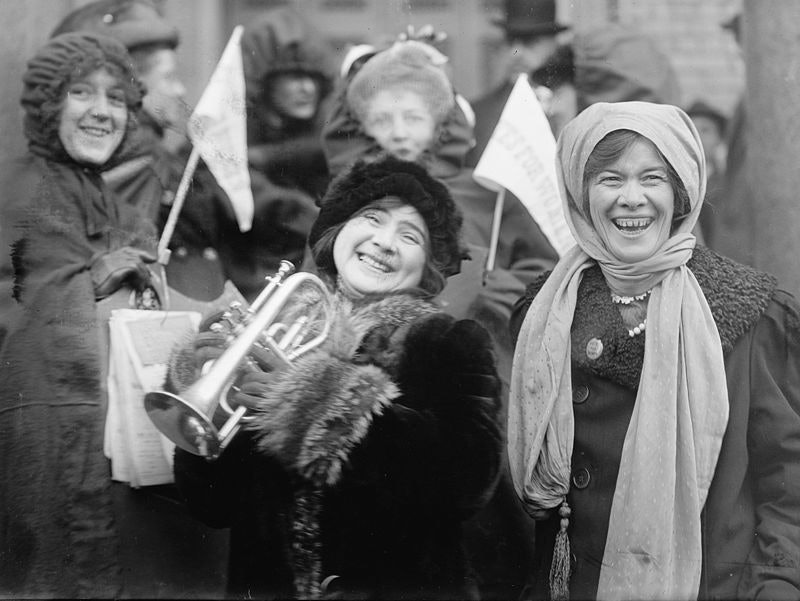 Today, August 26, marks the anniversary of the day that the 19th Amendment — the Constitutional amendment that technically gave all American women the right to vote— took effect in 1920. It's part of a group of anniversaries that Hillary Clinton in particular is very aware of; Rolling Stone mentioned in June that she makes a particular point of noting that her mother was born on the date of ratification while on campaign stops. Clinton's mentions of this help her mark a clear line from the ratification of women's universal suffrage all the way to her breaking the ultimate glass ceiling (and hopefully stepping into the White House). And the next President, as Tim Kaine pointed out to a cheering crowd in North Carolina, "is going to be the president that will commemorate the centennial of women getting the right to vote" — making the line seem even more obvious.

But the line isn't actually as clear as it seems. 2016 is, in many ways, a landmark election year for women in the United States, and the complicated history of the 19th Amendment and its impact on women's voting means that this may be one of the most important elections for female Americans ever.

We're often told that the 19th Amendment itself is a fairly straightforward narrative: brave suffragettes fight, and at last achieve, their aim with a Constitutional Amendment guaranteeing voting rights. "The right of citizens of the United States to vote shall not be denied or abridged by the United States or by any State on account of sex" — the primary text of the Amendment — is a pretty incontestable statement.

But the reality of the 19th Amendment is more complicated and less uniformly positive. For one, some women were already allowed to vote at the state level before it passed; but for another, women of color were habitually excluded from the mainstream suffragette movement, necessitating separate organizations. And communities of color kept facing disenfranchisement for years afterwards.

Let's deal with the issue of exclusion first. The history of women's suffrage in America was marred by continual race divisions: women of color were often excluded from suffrage groups, which led to the the formation of the National Association of Colored Women in 1896. And further, some suffragists actually argued about whether women of color should even be included in the franchise at all. The National Women's History Museum explains that "some white suffragists argued that enfranchising women would serve to cancel out the 'Negro' vote, as there would be more white women voters than black men and women voters combined." There's also the famous, and indicative, incident at the Woman's Suffrage Parade of 1913, in which black suffragist groups were reportedly asked to march separately to avoid angering white Southern delegations. (Ida B. Wells, unsurprisingly, refused.)

The fight for women's rights in America has not been color-blind, and it's a legacy that women of color have not forgotten. In July, Vox reported on a widespread ambivalence about Clinton among black female voters, noting that "it would be dishonest to say [Clinton's] nomination is a win for all women without reckoning with how so many women have been written out of history simply because they weren’t also white." And Clinton's own legacy hasn't entirely dispelled those ghosts. The 19th amendment and its legacy reflect the vast difference between feelings towards Clinton by white female voters and her opinion in the eyes of women of color.

Historical disenfranchisement is also a massive challenge to the idea that it was all smooth sailing after the 19th Amendment's passing — and an incitement to action for every woman of color on the verge of its centenary. Men and women of color across the nation have continued to have their votes suppressed for decades after they were supposedly given the franchise; the Smithsonian lists everything from poll "taxes" requiring a payment to vote to literacy tests and seriously labyrinthine registration processes as deterrents used to minimize the black vote in states across the US.

Nancy A. Hewitt and Steven F. Lawson, in a piece addressing "the myth of the 19th Amendment" for Slate, laid out with upsetting detail the degree to which "universal" suffrage wasn't anything of the kind in the years following the Amendment's ratification. "Millions of other women, most significantly black Americans in the South, remained disenfranchised," they wrote. "The 15th Amendment, ratified in 1870, had attempted to combat racial discrimination in voting but left open voter-suppression measures such as poll taxes, literacy tests, and grandfather clauses, all of which Southern states used as obstacles to prevent black men—and, after 1920, black women—from participating in electoral politics. At the same time, Latinas and American Indians who did not speak and write English were refused ballots in cities and states where they constituted a significant share of the population, including Texas, Arizona, Florida, Alaska, and New York City." It was the Voting Rights Act of 1965 that finally established the illegality of measures preventing Americans of color from legally voting. That was a whopping 45 years after the 19th Amendment supposedly cleared up the entire issue for ladies.

The real significance of the 19th Amendment's legacy for the 2016 election is that, in modern America, voter suppression still continues, and is still deeply focused on disenfranchising people of color. The idea of voter restriction laws has, with exquisite timing, been at the front of the nation's mind, with North Carolina, Wisconsin, Kansas and Texas striking down voting laws that, as one judge wrote in the North Carolina decision, targeted African Americans "with almost surgical precision." In these states, judges found that anti-voter fraud measures, from ID requirements to the elimination of pre-registration, were actually working to intentionally suppress black votes.

But while the elimination of these measures is obviously a positive, it's not all good tidings. In August, The New York Times reported on the real difficulty with the new federal court legislation overturning voter suppression in Texas, North Carolina and elsewhere: it doesn't go far enough:

"Millions of voters, especially minorities who might have otherwise been obstructed by voter-identification requirements or shortened early voting times, will now be able to cast their ballots in the presidential election. But these victories, though significant and hard-won, concern only major state-level voting laws. They obscure a more pernicious problem: In towns, cities and counties across the country — particularly throughout the Deep South — many discriminatory voting changes have been made at more local levels."

These changes include purges from the voting roll, locating polling places in predominantly white neighborhoods and other practices that may seem "efficient" but are actually deeply discriminatory remain in place across many regions of the US.

The historical and contemporary pictures of women's voting rights in America are complicated ones; but that complexity is the reason why this historic election, in which a woman is a presidential candidate for a major political party for the first time, should get you off your butt and out to vote. We've had a very long, hard time to attain the franchise, particularly for women of color, and the fight isn't yet completely won. This is the election in which to show up and make it count, in which women need to make their historic mark and show just how much, as a gender, they've overcome.