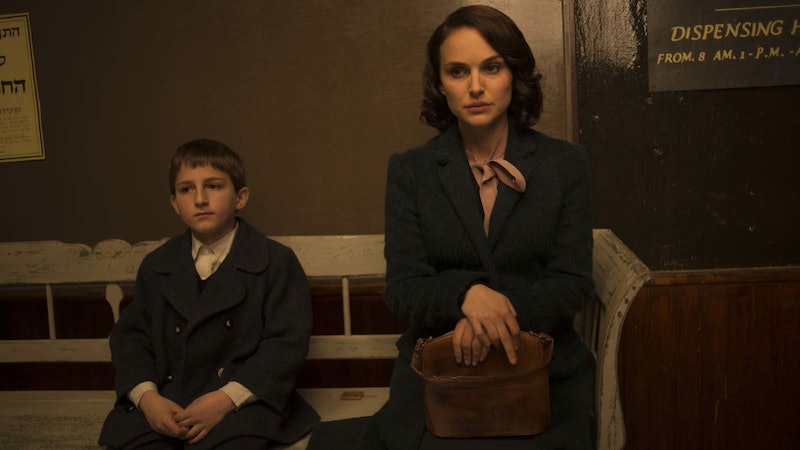 It's hard not to fangirl over Natalie Portman. Her work has captivated audiences since her 1994 debut in Léon: The Professional, and she has established herself as a feminist and role model whose principles are unshaken by her superstar status in Hollywood. Portman's latest project, A Tale of Love and Darkness , is a testament to her multitalented nature. It represents her debut as both a screenwriter and director, and she stars in it. So for the first time ever, fans will see a film in which Portman's creativity permeates every aspect of the project.

The movie, in theaters Aug. 19, is an adaptation of Amos Oz's autobiographical novel of the same name. It revolves around a young boy named Amos' coming of age amidst the formation of the State of Israel, while also focusing on Amos' relationship with his depressed mother. The novel is multifaceted and over 500 pages, so translating it into a film is an ambitious endeavor, to say the least. Adding a final layer of complexity to the project is the fact that the movie is entirely in Hebrew. However, Portman felt compelled to take on the challenge of bringing A Tale of Love and Darkness to the big screen.

In the publicity materials for the film's premiere at the 2015 Cannes Film Festival, Portman explained that she was drawn to the story after reading Oz's novel seven years ago. The star said, "I wanted to direct it the first time I read it. The book is really moving and beautifully written and so many of the stories sounded familiar." However, at the time, Portman didn't desire to have a hand in other aspects of the project besides directing. She explained, "The part that I didn't know was that I was going to write it. I went around to a lot of writers to ask them to do it, and at the end some writer friends of mine said, 'You should do it. Just do it. You have such specific ideas.'"

Just as Portman didn't originally intend to write the script, nor did she attend to star in it. "I also didn't know that I was going to act in [the movie]," she said. "I always thought that I was going to direct it, that someone else would act in it." However, procuring funding for the project proved to be a challenge, and many potential financiers said they would only back the movie if Portman was the star. Suddenly, what had started out as Portman's directorial debut became a much more involved undertaking. The writer/actor/director rose to the occasion, and her passion for the project continued to grow. As she explained at Cannes, "I got to a point where I wanted it to be my vision and my ideas and my feelings and my way of seeing the world."

Some reviewers for the film have noted that the enormity of the undertaking, including the complex nature of the original novel, may have been too much for a first-time director to attempt. Houston Press noted that, while Portman's work is "inspired," it is too wide-reaching and therefore ends up feeling disjointed. The Wrap concurred, explaining that the film underemphasizes certain aspects of story and character and overemphasizes others.

If we're being honest, though, I don't know how many people could pull off the adaptation of a lengthy novel into a foreign-language feature film that they wrote, directed, and starred in. And the fact that Portman was even willing to attempt this feat is inherently exciting to me, as it shows just how much she is capable of. Personally, I am excited to see if this marks the beginning of a new filmmaking chapter in Portman's career.