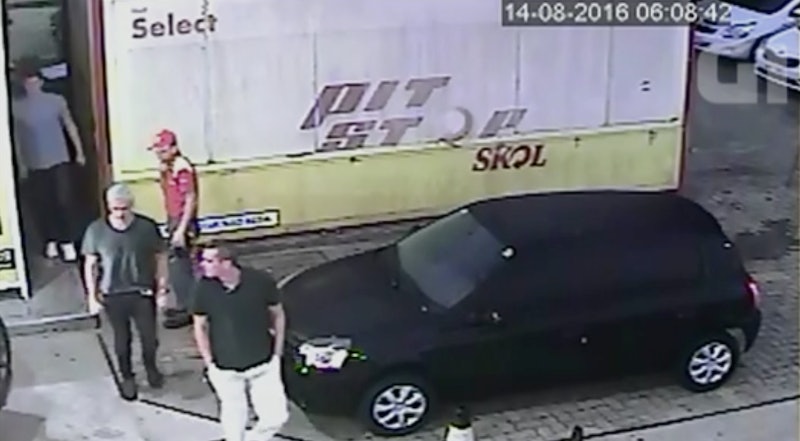 On Thursday, as Brazil authorities publicly stated their belief that Ryan Lochte and his swimming teammates had fabricated a story about being robbed, what appears to be a surveillance video of Lochte at the gas station in question emerged. It was published on Globo.com, which described the video as being real footage from the gas station on the morning of the incident Sunday. The video shows security staff apparently trying to stop Lochte and what appears to be his teammates, Jack Conger, Jimmy Feigen, and Gunnar Bentz from leaving the property. Update: Brazilian police officially declared that the four U.S. swimmers were not victims of robbery, BuzzFeed News reported. Instead, the Brazilian officials said that the swimmers "vandalized the restroom" of a gas station and they tried to leave the gas station before police officers could arrive to help.

Earlier: Lochte, now in the United States, hasn't commented since Wednesday night, when he stuck by the details of his original story — changing only a few elements, like the direction of the gun he claims was pointed at him. Two of his teammates were pulled off the plane Wednesday and made to stay in Rio for questioning. Lochte and his teammates had initially said that they were robbed at gunpoint by men posing as police.

In the video, Lochte is plainly obvious, thanks to his green hair. It's clear from the video that there is some sort of run-in between the swimmers and security, but what isn't clear is what was said, nor what led up to it: Brazilian authorities claim that one of the swimmers broke a door when the group went to the bathroom, and the group was allegedly inebriated and aggressive towards security. Brazilian police also claim that the police were called, but that the swimmers left before the police got there. Brazil also claims that Lochte and his teammates paid the manager of the gas station before they left.

Neither Lochte nor his teammates have publicly commented on the video, nor changed the narrative of their story.

Let's give these kids a break. Sometimes you take actions that you later regret. They are magnificent athletes. Lochte is one of the best swimmers of all times. They had fun. They made a mistake. It's part of life. Life goes on.

More like this
The Families Of Grenfell Tower Are Still Waiting For Justice, Five Years On
By Bustle UK
How To Fight For Reproductive Rights, Based On How Much Time You Have
By Courtney Young
Boris Johnson’s Leadership Is In Question – Again
By Bustle UK
Prince William Reveals Charlotte's Hidden Talent In Ultimate Proud Dad Moment
By El Hunt
Get Even More From Bustle — Sign Up For The Newsletter