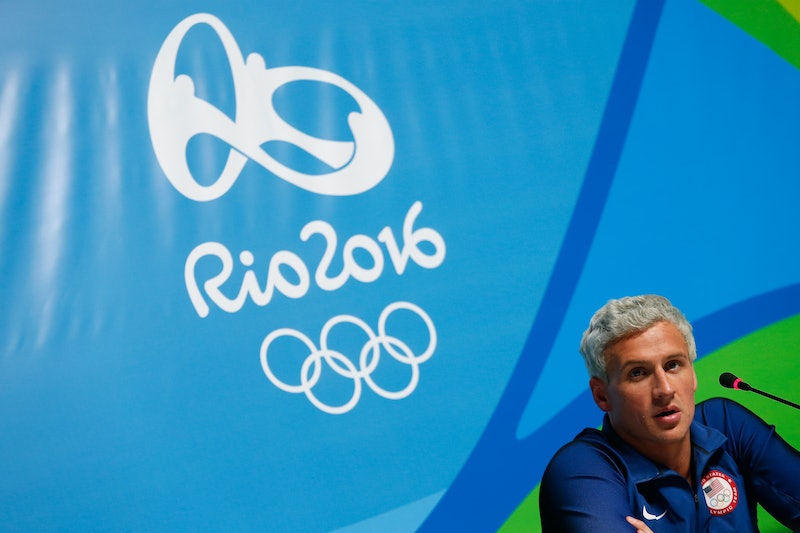 Well, it looks like Ryan Lochte may have lied. According to The Associated Press, Lochte may have made up the story of being robbed in Rio, after he and three other American Olympic swimmers allegedly damaged a bathroom door at a gas station on Sunday night. So apparently that whole "robbed at gunpoint" incident never actually happened, according to certain Brazilian officials. Update: Brazilian police officially declared that the four U.S. swimmers were not victims of robbery, BuzzFeed News reported. Instead, the Brazilian officials said that the swimmers "vandalized the restroom" of a gas station and they tried to leave the scene before police officers could arrive to help.

Earlier: Unsurprisingly, Twitter had a lot to say about Lochte's alleged lie. However, the best tweet to come out of the event certainly came from Wendy Brandes, who tweeted on Thursday morning, "If Ryan Lochte lied about that robbery, how can we ever believe any man's allegations of robbery?" Spot on. In her tweet, Brandes brilliantly used the Lochte situation to make a point about the way women are treated when they make an accusation of sexual assault or rape. When a woman alleges she was sexually assaulted, the veracity of her claim is always scrutinized — as if women are constantly making up stories about sexual assault (they're not).

On the other hand, no one even thought to question Lochte's claims that he and his teammates were robbed at gunpoint in Rio. Until the judge noticed discrepancies between Lochte's account of the alleged robbery and his teammate Jimmy Feigen's testimony, it was assumed that if Lochte said the swimmers were robbed, then the swimmers must have been robbed. In contrast, no one ever assumes that women who report sexual assault or rape must be telling the truth.

In replies to Brandes' tweet, other Twitter users asked questions that Lochte would have been asked had he been a woman making allegations of sexual assault, and not a man alleging that he was robbed. Questions like, "What was Lochte wearing at the time he was held at gunpoint?" and, "What was he doing out late at night?"

Obviously, no one asked Lochte and his teammates these questions after the alleged robbery because no one immediately jumped to the conclusion that they made the incident up. Yet if they were women reporting a rape, the questions never would have stopped because as Brandes' tweet points out, women who report sexual assault are always met with skepticism.

So, Brazilian officials declared that Lochte lied. Does this mean that from now on, when a man reports a robbery, his allegations will not be believed? Will he have to face extreme scrutiny about his outfit at the time of the crime, the truthfulness of his nature, and the veracity of his claim? Nope, that's not the way it goes.

When a woman alleges she was sexually assaulted it's as if everyone wants to prove her story wrong, but that rule simply does not apply to men when they report a crime. Everyone assumed Lochte was telling the truth, but no one makes this assumption when a woman reports a rape or sexual assault. Talk about a double standard.