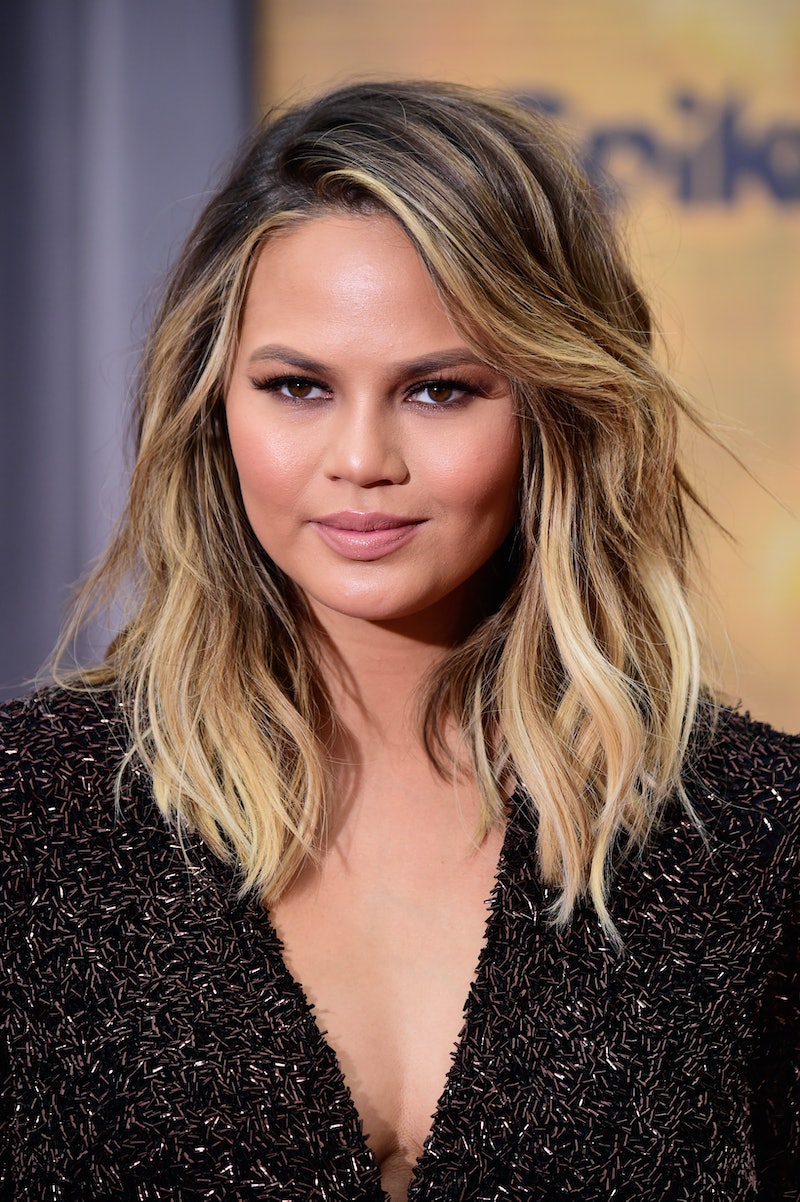 Well, the 2016 Rio Olympics might now be remembered for that time a group of male U.S. swimmers allegedly lied about being robbed at gunpoint. On Thursday, a Brazilian police official claimed to the Associated Press that Ryan Lochte, Jack Conger, Gunnar Bentz, and Jimmy Feigen were never robbed at gunpoint, as they previously claimed, but were rather involved in an incident at a gas station after a party the same night of the alleged robbery. The Brazilian police officer's claims are causing quite the stir on social media, with many expressing their opinions about the incident. There are many taking this opportunity to create memes and make fun of it all, whereas others are quite heated over it, but there is one particular celeb who doesn't have time for it and wishes everyone would focus on other issues. Chrissy Teigen responded to the Lochte debacle on Twitter Thursday and her tweets are something everyone who is following the news should read.

"I personally cannot bring myself to give two sh*ts about Ryan Lochte's gas station fight, and this is why," the 30-year-old model tweeted. Her comment was accompanied by a New York Times article about 5-year-old Omran Daqneesh, the Syrian boy who was pulled from rubble after a Syrian government or Russian airstrike happened in Aleppo on Wednesday. The photo of Daqneesh shows him covered in dust and bleeding. At first glance, Daqneesh doesn't even look real and actually could pass for a statue or a doll. The photo is definitely jarring and shows just how many children are being harmed or injured in Syria. And it's focus on this news that Teigen wishes people would focus their time on.

She later tweeted about Lochte and the other swimmers, "I'm not saying we have to care about every issue at once, or we must pick and choose what to bring to light but god damn, who the f*ck cares." The Lip Sync Battle star added, "Stupid as sh*t gas station international incident, nope. Don't care."

Teigen then also commented on the memes being created around the Lochte incident. She admitted they were funny at first, but quickly became absurd for a different reason after she read the NYT piece. "I'm sorry if the gas station memes just aren't quite as funny as they were before seeing a boy pulled out of airstrike rubble." Basically, Teigen gets frustrated sometimes by what people care about or harp on, when this world is filled with so much pain, anger, sadness, and hate. As she tweeted, "No I do not think I'm better than you because I don't find it quite as entertaining. I just hate what we care about sometimes. We. Me too."

Whether Lochte and his fellow swimmers lied about all of this or not, Teigen still makes a good point that there are so many other important things happening in this world that should be getting just as much focus or if not all of the attention. That's not say what or what didn't happen in Brazil with Lochte, Feigen, Conger and Bentz isn't important; the incident itself could affect the way Brazil as a country is viewed. As Brian Winter, the vice president for policy at the Americas Society and Council of the Americas, said (via The New York Times ),

"This incident has caused so much damage to Rio's brand abroad that I think Brazilians deserve a clear, consistent account of what happened. [The entire episode] has tapped into one of Brazilians' biggest pet peeves — gringos who treat their country like a third-rate Spring Break destination where you can lie to the cops and get away with it."

All of this could cast a bigger shadow over the whole country, which is what happened with the Zika virus and reports of crime throughout the country. But Tiegen sentiment still rings true, because focus isn't being put on how this could affect the country, but rather on Lochte and the other swimmers and memes and jokes about them.

As for what exactly the Brazilian police source is claiming happened, he told ABC News that "one of the swimmers was seen on CCTV footage breaking down the door to the bathroom at [a] gas station and fighting with a security guard" on the same night of the incident. Lochte is currently back in the U.S. and Feigen is believed to be in Brazil, while the other two swimmers have been ordered to stay in Brazil by authorities. As for Lochte, he hasn't commented publicly since Wednesday night, where he stuck to his original story while talking with Matt Lauer.

The International Olympic Committee (IOC) did comment on the claims made by Brazilian authorities. Rio Olympics spokesman Mario Andrada said,

"I do not regret having apologized. No apologies from [Lochte] or other athletes are needed. We have to understand that these kids came here to have fun. Let's give these kids a break. Sometimes you make decisions that you later regret. They had fun, they made a mistake, life goes on."

As for Teigen, she ended her so-called rant as follows, "I dunno. We can be silly and laugh and still remember we are incredibly lucky to have things to laugh and smile about. Also, please note I am fully aware a large percentage of my tweets are moronic, unimportant babble."

If you ask me, when it comes to these tweets, they are far from "moronic, unimportant babble."