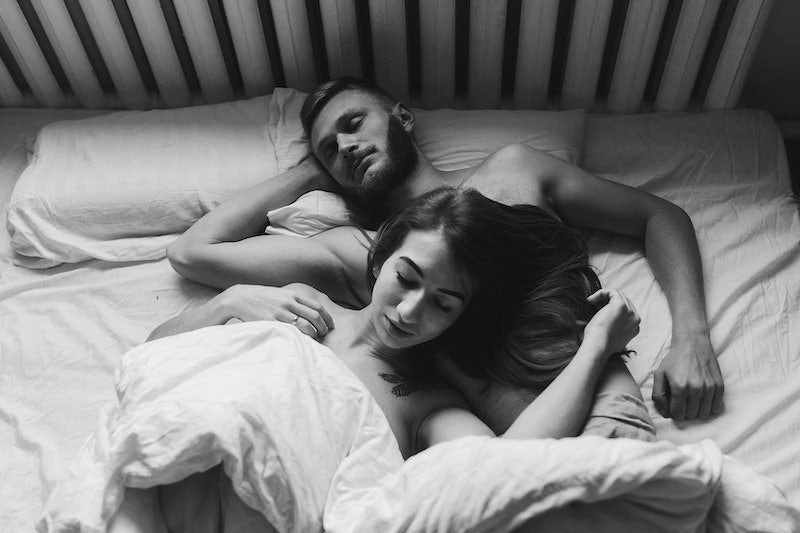 I’m exhausted — and my boyfriend forgot his computer this morning. He’s in the middle of an intense creative project with his work, which definitely contributed to his forgetfulness, but he also hasn’t slept in two nights. And last night? Last night was definitely my fault. You see, I’m not a great sleeper. I have really intense dreams almost every night and they get worse during full moons and around my period. Last night was apparently the full gamut of Emma Sleep Disruption: tossing and turning, kicking, talking — basically everything except night paralysis, which my boyfriend might actually prefer because then at least I don’t move. It sucks, but this is reality: My boyfriend and I don't sleep well together.

We’ve never slept well together in the three and a half years that we’ve been sharing a bed. I’m a very active sleeper; he snores; I like being bundled up like a hot burrito; he prefers cool sheets and says I feel like a furnace. I have consistent nightmares that leave me whimpering and reaching out for him at least every other week, only to find sometimes that my kicking and talking has driven him into the guest room. And because we move a lot — we head to a new country every three to nine months — it can be hard to find consistency even when we do find a solution.

But even couples who sleep in the same bed for decades have this sleep disruption problem. My parents argued about who was waking up whom for years until my dad decided to prove once and for all that it was my mom doing the sleep disruption. He set up a motion-activated camera that he’d bought for security on our house next to their bed. The next morning, there were over 100 photos and literally almost every one was of my mom — turning over, sitting up, with her leg in the air. My dad thought he’d finally won the sleep argument but my mom had a killer response: She just refused to look at the pictures. As long as she didn’t see them, they didn’t exist.

It’s a cute anecdote, but the effects of sleep deprivation on your relationship can be much more serious. According to a recent study published in the Journal of Family Psychology by researchers from Florida State University, people who had better-than-average sleep the night before felt more satisfied with their romantic relationship than those who slept poorly. Makes sense, right? I’m definitely grumpier — and much more emotional — when I can’t sleep.

“Research shows that adults need at least seven hours of sleep,” Sarah Watson, licensed professional counselor and sex therapist, tells Bustle. “When we don't get enough sleep we tend to be short tempered, have increased anxiety or mood swings and this can impact your connection with your partner.”

So what can couples who have trouble sleeping together do? Here are 11 tips:

Working out for even 20 minutes per day is excellent for better sleep — and stopping working out can be a reason why your sleep is getting worse. I experienced this firsthand when I badly sprained my ankle in January, making it impossible to work out for months. Let’s just say my boyfriend suffered hard for that half year.

Watson recommends yoga in particular, as it not only makes your body stronger but also restores it — not to mention the calming effect it has on your mind.

2. Talk To Your Doctor

There could be a medical reason why you’re not sleeping well, so Watson’s top advice is to go to your doctor, get a full physical, and talk to them about what’s going on. You could have sleep apnea, for example, which is a life-threatening condition that causes people to stop breathing in their sleep.

Eating a late dinner can mess up your sleep-wake cycle and lead to disrupted sleep. Try getting all your meals in a few hours before you go to sleep if you’re having trouble sleeping soundly through the night, even if it makes you feel like your grandma to eat at 6 p.m.

I know for a fact that one of the reasons I don’t sleep well is because my brain is going constantly. I’m naturally inclined toward talking, reading, and consuming information all the time, and the internet world — which also happens to be my job — definitely doesn’t help with that. My boyfriend has been bugging me to try meditation to help me sleep for years now and I’ve only recently taken the first baby step toward doing that by doing yoga regularly.

Point being: You don’t have to dive deep into intense, monk-like meditation sessions if you think this is what you need to help your sleep. Take baby steps. Start with five minutes per day or do an active meditation like yoga if you think that will help.

5. Get Some Natural Remedies

Watson recommends melatonin supplements for folks who are having trouble with disrupted sleep. Melatonin is a hormone made by your body to help regulate your sleep and a little boost can help you rest. She also recommends magnesium supplements and soothing essential oils — like lavender — on your body or in a diffuser.

6. Ban Electronics From The Bed

“Turn off the electronics well before bed,” Watson says. “This includes the TV.” Electronics not only keep our minds occupied by continuing that constant flow of information into our brains but a lot of them also emit “blue light,” which boosts attention and reaction times, according to Harvard researchers. That’s great during the day, but at night it perks your brain up right when it should be shutting down.

Le sigh. This is one I struggle with — and probably will never achieve. I already quit smoking three years ago so the thought of giving up coffee as well is pretty much an impossibility. In the interest of relationship survival, though, I have cut out late afternoon and night time coffee. Small concessions, right?

I like being bundled and swaddled in bed, while my boyfriend prefers to sleep more freely. Plus, I heat up like a wood stove at night and it’s worse when he touches me. Solution? Separate blankets. Sure, it’s not very romantic but it definitely helps.

If you can afford it, trade your mattress up for a bigger one. I’ve found that the only times we both truly sleep well is when we’re in a king-size bed. Our bed in Vietnam, for example, was so big that I could sleep just as easily no matter which of the four sides my head was on. Ugh, I miss that bed.

The times I sleep the best are the times that me and my boyfriend get it on right before sleep. After sex, your body releases oxytocin and vasopressin, both of which are associated with sleep. Plus, sex is like a mini workout, right? Two birds with one stone!

This is always a last resort for us because I feel really strongly that the bonding that comes from sleeping together is important for couples, but sometimes it just gets to be too much and either I or my boyfriend goes and sleeps in the other room. I hate waking up at night to find that he’s not there, but I hate it even more when he’s exhausted during the day and can’t work and definitely can’t give me much attention. We try to keep it to a couple of times per week, and only if I’m near my period or the full moon is high. Like I said: Small concessions, right?