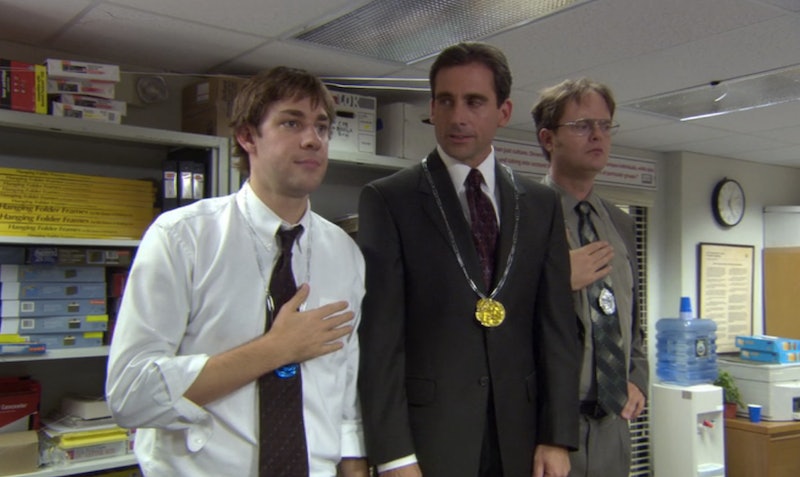 As all fans of The Office (especially the ones who have Netflix or beloved DVD collections) know, it's a show that you can watch over and over again and still laugh, or sometimes cry, as hard as you did the first time around. Not only are the jokes that killed on first watch still hilarious, but during repeat viewings you can notice more subtle moments that make the show more layered. But there is one strange instance even the most passionate fan may not have noticed. During an interview with Bustle while promoting The Hollars, which he stars in and directs, John Krasinski brings up a moment during the episode Office Olympics (Season 2, Episode 3) that still makes the cast laugh to this day — and that will make fans quickly go back for a closer look at the yogurt lid gold medals scene.

"That was one of my favorite episodes of all time. I have the weirdest story about that," Krasinski, who stars in and directs The Hollars, says. "When we first saw the first cut of it, no one had said the phrase 'yogurt lids.' So in the middle of this first cut, that didn't go to air, obviously, it's our editor [saying 'yogurt lids']. So I think I'm saying, 'And I'll be handing out these...' and then you hear the editor say 'yogurt lids.' And so the yogurt lid thing, we always laugh when we hear it."

The thing is though, while Krasinski says the episode didn't make it to air, it does seem that version of the scene at least made it to the episode featured online. In a clip of the scene on NBC's site (below), you can clearly hear that the person saying "yogurt lids" definitely doesn't sound lke Krasinski. This is also the case for the version of the episode on Netflix. So, John, if you want to get the old Office gang together to laugh at "yogurt lids" again, just know, the clip is still very much available.

If you're a fan who now wants to go search out a weird moment you missed the first go 'round yourself, know that the cast will definitely appreciate your passion. "Our fans are the reason why we were on. The reason why we stayed on the air. We were supposed to be cancelled every single year," Krasinski says. "You know, a lot of people can say they're only on the air because of their fans, but we actually can, because iTunes came out at the time were were coming out, so people were actually buying the show rather than watching it for free on Thursday nights ... We're one of the only shows who can actually say our fans saved our show, our fans are our show."

One thing fans probably got at least a little frustrated with over the course of the show were some of the decisions Jim made, even though most of the time he was super likable. ("Really, you're buying her a house without letting her see it?!" is one that comes to mind for me.) But for Krasinski, he wanted to shake Jim when it came to asking Pam out during the first couple of seasons.

"I related to Jim in so many ways, but I think the hardest part was shooting those first few seasons where it was a "will they, won't they" type thing," he says. "It's hard to have Jim have those moments with Pam and not have him say just, "Do you wanna go out for coffee” or something. I think, for me, those were the hardest things to not understand why Jim wouldn't take a chance sooner. But then I thought about it, and I would never take a chance sooner either."

Thankfully, both Jim and Pam did end up taking a chance, and if you're now feeling like you want to go back and re-watch some of the episodes to see how that all came together, just remember to keep your eye out for the "yogurt lids" moment. And know that the cast would be laughing along right with you.