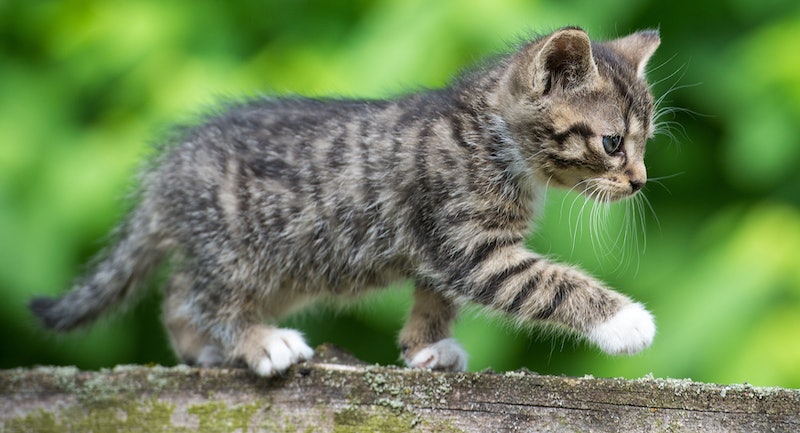 Do you want to see something incredibly unpleasant and terrible and not adorable? Well, step right up! Earlier this week, Mashable shared a tweet from Twitter user @cat_hometown, and I have yet to unsee it. Yeah, it's that gnarly. Here’s the quick and dirty and spooky synopsis of the post: It’s a video of two kittens watching Olympians jump on trampolines at the 2016 Summer Games. As a matter of fact, it is about as nightmare fuel-y as it gets.

In the clip, we see two tiny cats perched on an entertainment stand while the rest of their tiny cat buddies lounge below on plush beds. The cats aren't perched up there for kicks and giggles; they're on a mission. The kittens' mission: stare at the television while an Olympic trampoliner does his trampolining. One kitten is so mesmerized by the trampolining that it can’t be bothered to maintain its balance on the entertainment stand, so it slips and falls back into the basket of tiny cats. The other paws at the television, as though the trampolining trampoliner on the screen is a toy mouse suspended from a stick. Or a laser pointer beam. The two kittens could not be more in the zone.

Ready to put the horror movie in your eyes? Are you sure? OK, here it is:

Oops, you caught me in a lie! This video is the opposite of a horror movie! It actually might be the cutest thing I’ve seen all week! If being obsessed with videos of kittens watching the Olympics was an Olympic sport, I could probably snag a gold medal!

More like this
The 2023 Super Bowl Commercials Feature A 'Breaking Bad' Reunion & Missy Elliott
By Alyssa Lapid
All The Ways You Can Watch The Super Bowl In The UK
By Asyia Iftikhar and Darshita Goyal
Twitter Is Shook As Tom Brady Holds Back Tears Announcing His 2nd Retirement
By Marina Watts
David Beckham’s Controversial Qatar Deal Skyrocketed His Net Worth
By Catharina Cheung
Get Even More From Bustle — Sign Up For The Newsletter
From hair trends to relationship advice, our daily newsletter has everything you need to sound like a person who’s on TikTok, even if you aren’t.