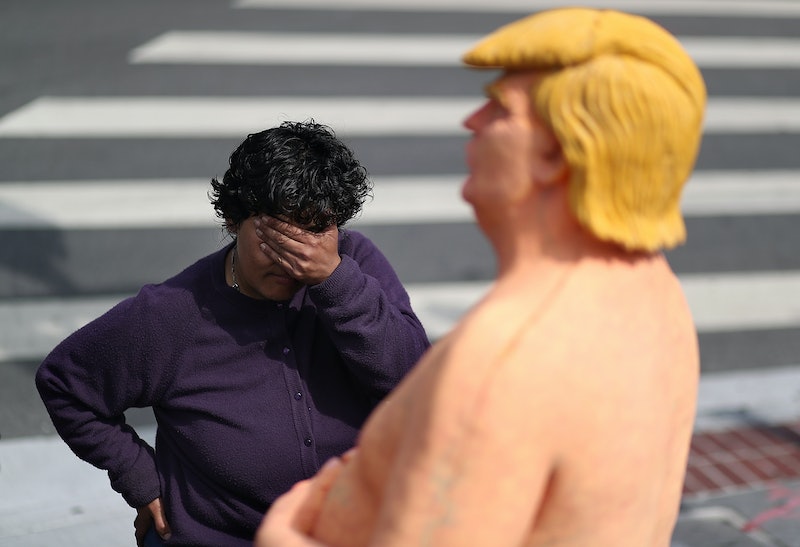 On Thursday, naked statues of Donald Trump began popping up (no pun intended) across the nation — from Cleveland to Seattle, Los Angeles to D.C. A LA-based artist named Ginger is thought to have designed it for Indecline, a street art collective, according to the Washington Post. And in New York's Union Square, the statue was met with a particularly biting response. "NYC Parks stands firmly against any unpermitted erection in city parks, no matter how small," was the New York Parks department's official response to the Trump statue, according to a tweet from Wall Street Journal reporter Josh Dawsey.

One glance at the statue, and it's clear to see what the department is mocking. The Trump statue is not well-endowed. Also, he has no testicles.

In several posts of the statue on its Instagram account, Indecline captioned the image, "The Emperor Has No Balls." Meanwhile, the New York Parks department, it could be argued, has a fair bit of gumption, given its public statement that basically implies that the statue is a true-to-life replica of Trump — at least in some ways.

The infamous Donald Trump "small hands" saga kicked off back in March, when then-presidential candidate Marco Rubio told a crowd: "I don't understand why his hands are the size of someone who is 5' 2" ... Have you seen his hands? And you know what they say about men with small hands. You can't trust them." Graydon Carter, meanwhile, said decades ago that Donald Trump was a “short-fingered vulgarian."

In response to Rubio, Trump said back in March, "Those hands can hit a golf ball 285 yards." He went on to insist to his audience: "Look at those hands. ... Are they small hands? And he referred to my hands: If they are small, something else must be small. I guarantee you there is no problem. I guarantee you."

At the time, much of the coverage around the incident surrounded the fact that America was in the middle of an election cycle and two candidates were arguing about the size of a real estate magnate's penis. Now, of course, that March back-and-forth feels like the least bizarre part of 2016.