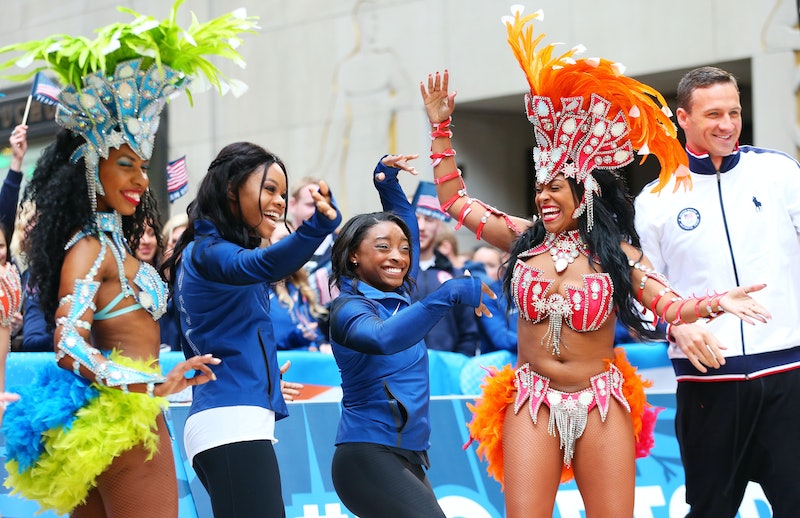 While American gymnast and decorated Rio Olympian Gabby Douglas appeared unable to do anything right in Rio, swimmer Ryan Lochte appears to have done no wrong. As Douglas is ripped apart from head to toe by spectators and media alike unsatisfied with her hairstyle, her apparent attitude, and even how she decides to hold her hands during the U.S. national anthem, Lochte is being excused from allegedly destroying private property and lying about being robbed at gunpoint because he's just "a kid" who came "to have fun" and deserves "a break." It's an unfortunate example of how women often find themselves subjected to a greater level of criticism and scrutiny than their male counterparts.

For Douglas, a three-time Olympic gold medalist, competing at the 2016 Summer Games meant battling a slew of harsh criticism. The 20-year-old found herself making headlines not for her athletic ability but because some people didn't like the way she styled her hair, what she did with her hands on the podium, or how often she smiled. On social media, Douglas was accused of being unpatriotic, un-American, bitter, salty, crabby, and a poor sport, among other things. In a piece for the Los Angeles Times, sports columnist Bill Plaschke accused Douglas of "pouting" on the podium when she should be representing America to the world.

The truth behind Lochte's misadventures in Rio, or #LochteGate as it has been dubbed, is still unfolding, but so far critics haven't come for Lochte in nearly the same way as they did for Douglas. Although 32-year-old Lochte and teammate James Feigen claimed to have been robbed at gunpoint with fellow Team USA swimmers Gunnar Bentz and Jack Conger while in Rio, authorities felt the details didn't add up. Later, Lochte's teammates reportedly admitted the story was just that: a story meant to hide the fact the four U.S. Olympians had drunkenly broken down a bathroom door at a gas station in Barra de Tijuca before getting into a heated exchange with the station's security guard, according to ESPN.

While a lot of confusion still surrounds #LochteGate, the incident has been met more with humor than outrage. Even the International Olympic Committee has moved to frame the incident as kids having fun. "No apologies from [Lochte] or other athletes are needed," Olympic spokesman Mario Andrada said in a statement released Thursday. "We have to understand that these kids came here to have fun. Let's give these kids a break. Sometimes you make decisions that you later regret. They had fun, they made a mistake, life goes on."

This lighthearted response to Lochte's alleged lie and potential vandalism have drawn many to point out the double standard present in how Lochte's and Douglas' actions in Rio were scrutinized. At 20, Douglas must bear the weight of representing an entire nation while, at 32, Lochte is free to be "a kid." Whereas Douglas becomes the target of mass criticism that sure as hell looks a lot like online bullying, Olympic officials make excuses for Lochte. Not to say Lochte should be torn apart or publicly stoned, but rather that it is important to rethink the double standard present in our criticism of Douglas.