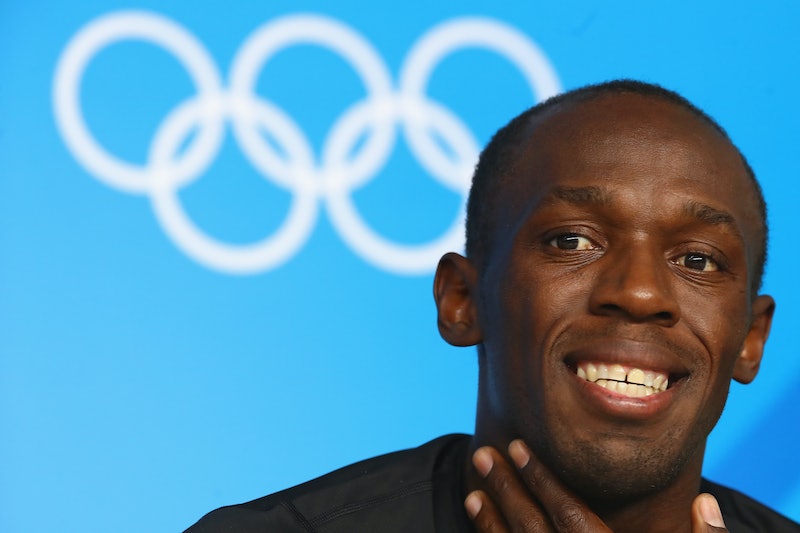 As Usain Bolt has cemented his title as fastest person in the world at the Rio Olympics, one special woman has been even more enthusiastic than the rest of the world. Who is Usain Bolt's girlfriend, the woman doing all the cheering? The Daily Mail reports that the woman who has been enthusiastically rooting for Bolt on social media is Kasi Bennett, and she is believed to be the eight-time gold medal winner's girlfriend, though this is unconfirmed.

In January, Bolt revealed in an interview with Jamaican journalist Ian Boyne that he had a Jamaican girlfriend whom he'd been dating for two years. He didn't reveal too many details, except that she was 26 at the time and was from the Jamaican town of Old Harbour. He emphasized in the interview that privacy was important to their relationship:

I have explained to her that when it comes out it's not gonna be as she thinks it's gonna be. A lot of people will try to attack her so I tell her to just take it easy and let's make sure that you're ready for this. I don't definitely hide... but we don't try to put it out in the media like "here she is" because I personally know what's going to happen.

Kasi Bennett seems to fit this description. Her age could easily be 26, and her Twitter bio says she's from Jamaica. Over a year ago, she posted a picture of extravagant birthday gifts, including multiple pairs of Louis Vuitton shoes, with the caption "He's amazing..." It seems very likely that these would have been from Bolt, whose net worth is estimated at $32.5 million. The pair were even spotted getting affectionate at a Carnival in April. Bennett also posted pictures of Bolt on her Instagram captioned "#mysuperhero" a year ago, and Bolt captioned a carnival picture of himself and Bennett: "President and First Lady."

Bennett has been adorably enthusiastic in cheering on Bolt at the Rio Olympics. She's tweeted "watch babe kill this," and reposted an official Olympics tweet wondering "if Usain Bolt wins tonight..." with the correction "*when." She wasn't wrong, and celebrated appropriately:

There isn't a lot of info on Kasi Bennett available online, but her very stylish Instagram posts suggest that she is a model, or at least involved with the fashion world in some way. What we do know is that she's very supportive of her (possible) boyfriend's athletic career, and that she sometimes gets even more overwhelmed watching the Olympics than the rest of us.