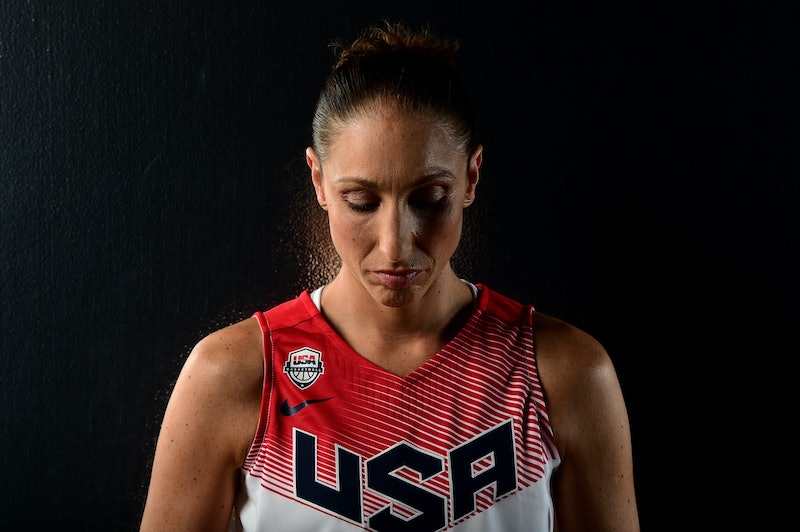 About 12 summers ago, a 22-year-old Californian native from Chino took over the WNBA. Since then, the unapologetic guard has gone on to win three Olympic gold metals and fiercely vying for the fourth at the Olympics she calls her "last," according to AZ Central. Her name is Diana Taurasi, of course, and she's without a doubt one of the players to know in basketball.

Now 34, Taurasi has been established as the greatest basketball player in history. But her long road to becoming the player she is today was hardly easy: According to the Players' Tribune, Taurasi began overtaking the basketball court in the sixth grade, when she realized her height was something of a great gift. Continuing to make her mark in every game she played by just scoring a few baskets, Taurasi became a local legend by the time she entered high school. Averaging 28.8 points, 12.9 rebounds and 4.2 assists during her senior year, Taurasi went on to become a Huskie at the University of Connecticut. There, she won three NCAA titles with poise and passion that aided her in achieving her biggest dream in life: the Olympics.

It was a natural move. About 48 hours after winning her final NCAA title, Taurasi became the youngest player suited up within Team USA in 2004. Set in the foreground of Athens, Greece, she got in a mere one practice before facing Japan and scoring 13 points in her first game, she lead the team to victory and later to the gold medal. Taurasi's champion streak followed repeatedly as she became the first overall draft pick in the WNBA draft by Phoenix Mercury, and led Team USA once again to golden triumph at the Beijing 2008 Olympics and again at London's 2012 Olympics, where Taurasi's dream of playing basketball reached a paramount epiphany. As she shun her most recent medal around her neck, draped in the American flag across her shoulders, Taurasi began to cry — but not from sadness, but instead, relief.

“I just kept going back to, oh man, there was one moment in your life that was out of your control, where you might not have been allowed to play basketball again,” Taurasi told AZ Central Sports of her tears of joy. “That was a scary thought. That’s what I was thinking about. I could’ve not been (in London). Something just hit me and I couldn’t control it.”

The moment Taurasi is referring to took place just two years prior in 2010, when Taurasi had to fight against more than a few women and the net — her reputation was at stake. According to ESPN, she was accused of taking a stimulant called modafinil while competing in Turkey. The accusation caused Taurasi to be suspended and banned provisionally as she tirelessly attemped to clear her name and not tarnish her international high-profile status to compete again with USA in London. After having taken a urine sample from Taurasi, the Turkish Basketball Federation released a statement that read: "...the urine sample taken from Diana Taurasi as a part of the regular process, after a game between Istanbul University and Fenerbahce... tested positive for modafinil, one of the illegal substances on [the World Anti-Doping Agency]'s banned stimulants list, according to preliminary test results." Modafinil is used to counter sleepiness.

When Taurasi was tested a second time and once again was said to have tested positive, her most underutilized asset of heart in the sport came into play. She denied the results, telling USA Today, "It toughens you up. Life's about going through stuff that is really hard. The only thing I'm guilty of is putting a lot of hours in the gym, and I've been doing that since I was a little kid."

Taurasi's words rung true, because the test was flat wrong. In February 2011, she was cleared her of all wrongdoing when the lab that tested her samples twice retracted their positive reports. As a result, the Turkish Basketball Federation lifted their provisional ban against Taurasi, and she was able to take her place in her team once more. Additionally, the World Anti-Doping Agency released a statement about the situation: "WADA has requested all the technical information regarding Diana Taurasi's analysis from the Turkish laboratory for an independent review. WADA-accredited laboratories' performance must maintain the highest quality standards set forth in the ISL... Whenever a laboratory does not meet those requirements, it is required to take fast corrective actions. In some serious situations, WADA may suspend or revoke the laboratory's accreditation following an appropriate disciplinary process." (Neither the Turkish Basketball Federation or the lab connected with Hacetteppe University in Ankara, Turkey recognized any fault in the testing procedure, but, according to ESPN, the lab had been previously suspended by WADA in 2009 for two months.)

Of the false positives, Taurasi told SB Nation in 2011, "You know sometimes the easiest explanation is the hardest to follow... I think this was scientific wrongdoing in their chemistry in the lab and it not only showed in my test but in other people's too. It's not like they just messed up one time. My defense wasn't based on my word that I didn't do it. It was facts. There were details in the chemistry, in the process that wasn't done the right way. And at the end of the day that's what they look at. The lab had been suspended in the past for not following protocol and this was just another example of them not following protocol on the testing methods that have to be up to par for WADA... It could not only ruin your career, but your reputation, that's the one thing I was most concerned about."

Now, five years later, Taurasi's presence at the 2016 Summer Olympics in Rio has already made an immense difference in the games: Currently, the icon has already tied her own Olympic record of five three-pointers, and she's now, on her way to winning yet another gold medal for the U.S. on Aug. 20. There's no doubt: Taurasi's final Olympic games will be one for the history books.