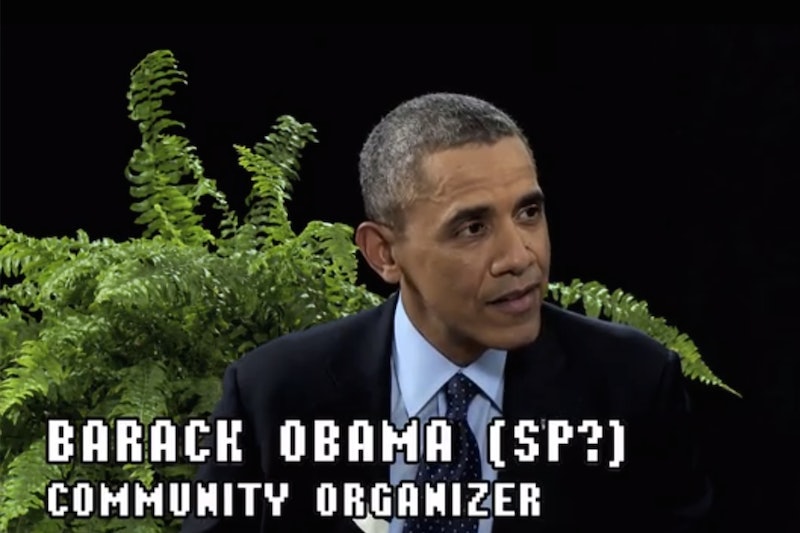 By now, if you haven't seen it, you'll have heard about it. President Obama appeared on Between Two Ferns with Zach Galifianakis in a video posted Tuesday morning, and it's generated a ton of attention. And not just for its comedic merit, which is considerable — our 44th President has always shown an enviable level of comedic timing and tone, and he turned in a performance worthy of any of the celebrities and comedians that have graced Galifianakis' interview set. Now, Ferns executive producer and director Scott Aukerman, in an interview with Vulture, has shed light on what it was like working with the most powerful man in the world.

The plan began to come together last July, when Aukerman and a host of other Funny or Die video creators met with senior Obama adviser Valerie Jarrett. She was interested in some videos that could promote the Affordable Care Act, with enrollment at that time still awaiting implementation, and Aukerman suggested he and Galifianakis were game. The result was months of uncertainty, and suspicions it would never come about; it wasn't until February that they got a few weeks' notice to prepare something.

The outcome was worth the wait. Aukerman and Galifianakis traveled to the White House to film the six-minute video, keeping a low profile so not to spoil the surprise. Aukerman's main hope was that the video not come across as a transparent plug for Healthcare.gov, instead being as funny, awkward, and delightful as any other episode they'd filmed. Said Aukerman:

Zach and I both at a certain point in the process were looking at each other going, "I can’t believe they’re letting us do this," so pretty much the whole thing — we definitely couldn’t believe it. We kept expecting resistance, but there wasn’t any. It was really an incredible situation. We kept expecting them to say “No, no, no, you can’t have that joke,” or “No, no, no, you can’t be funny, it has to all be about the Affordable Care Act,” but to their credit they really wanted it to be what it was and got out of our way.

By Aukerman's account, Galifianakis did feel some anxiety at being so combative and antagonizing towards Obama, even in a comedic context, though he says the attitude of his Ferns character means this is always somewhat true. But what about the deliciously passive-aggressive barbs the two traded? Did Obama have to clear his jokes?

I don’t think the president has to pitch jokes, he just says jokes and we enjoy them. ... I just loved how he was going for the jugular with Zach regarding Bradley Cooper. I could tell the president was really enjoying that, and that’s obviously a funny sore spot for Zach. I really enjoyed that exchange.

Since the video was posted, it's racked up a staggering 13 million views. Healthcare.gov has seen a huge boost in its traffic, up about 40 percent since Monday. In other words, Obama got to look hip, crack jokes with the polished smoothness of an entertainer, and help himself politically all at the same time? Cue the expected ire from conservatives, mostly because it was a very effective way to publicize the Affordable Care Act.

Of course, there is one other way to look at it that's undeniably pretty damning: