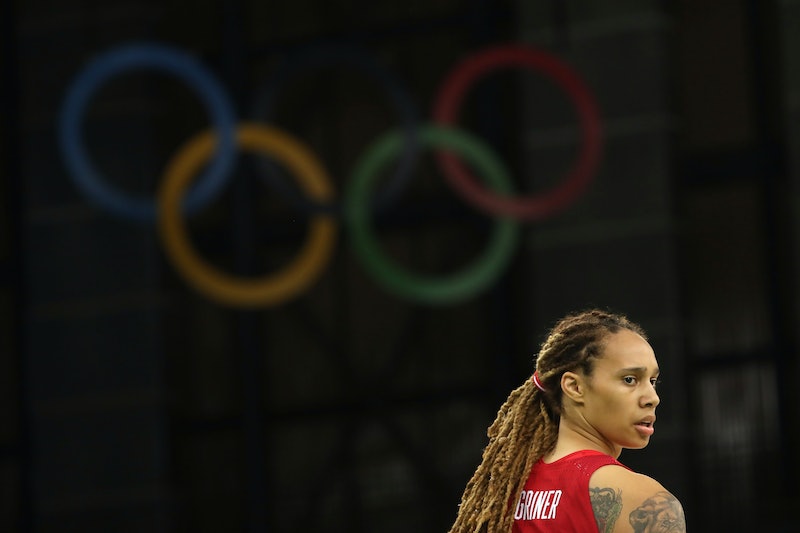 The USA women's basketball team competing at the Rio Olympics has several openly gay athletes, including former Baylor college basketball and WNBA star Brittney Griner, who was married to fellow WNBA player Glory Johnson. In 2015, Griner and Johnson became the first openly gay couple in the league, though it was short-lived. (The pair have found themselves in a pretty ugly domestic dispute.)

Griner isn't the only openly gay athlete on the U.S. team. Seimone Augustus and Angel McCoughtry have also come out as gay in the past, with Augustus creating a stir in 2013 for kissing Diana Taurasi on the court during a regular season WNBA game. (Taurasi has never publicly identified her sexual orientation.)

The WNBA has long been leading the charge when it comes to LGBTQ rights and acceptance. Back in 2005, WNBA player Sheryl Swoopes made headlines for being the only openly gay athlete active in sports at the time. Swoopes told ESPN Magazine in a 2005 interview: "I'm just at a point in my life where I'm tired of having to pretend to be somebody I'm not. I'm tired of having to hide my feelings about the person I care about."

Swoopes was the first female basketball player to publicly identify herself as gay — nearly a decade earlier than the NBA's Jason Collins. And, really, no one bat an eye. But as Washington Mystics' player Stefani Dolson, who's openly gay, pointed out for ESPN earlier this year, there are still many players in the WNBA who have yet to publicly address their sexual orientation. Still, Dolson said that behind the scenes, the WNBA has a progressive and open vibe:

Within our team, most people are comfortable with players freely expressing who they are. When I entered the league, I met these women and got to know them. I learned who was straight and who wasn't, it's no secret. It's just not something that is always in a press release.

Aside from its numerous LGBTQ players, this atmosphere shouldn't surprise anyone; the WNBA celebrates LGBTQ Pride for an entire month, which no other professional sports league does. It wasn't until this year that the NBA debuted special pride t-shirts. The NFL, NHS and MLB have also started releasing pride-themed apparel during the month of June, but will we ever see rainbow cleats or sneakers donned by athletes during regular season games? Probably not in the near future — and that's a true shame.