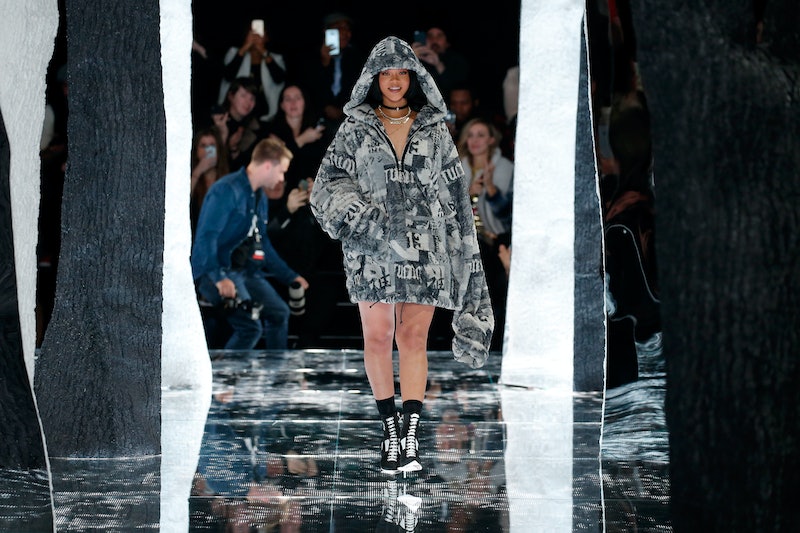 Although the iconic pattern was originally designed for folks needing to hide amongst the undergrowth, celebrities wearing camo print can't help but turn heads. While military trends are forever coming and going, the unmissable look seems to have found a permanent home in contemporary fashion.

According to Time, U.S. soldiers first began rocking original camouflage during World War I for the purpose of aerial and trench warfare. By the time World War II came around, painters and sculptors alike were flocking in droves to the military's headquarters for camouflage development. They took direct inspiration from the shapes and shades of nature, obviously. Hunters and nature enthusiasts soon picked up on the benefits of camo prints for stalking animals in their natural habitats.

The mainstream didn't pick up on the design until 50 years or so later, though. I owned my first pair of khaki camouflaged cargo pants as a tween in the early 2000s; and just the other week, I upgraded to a fancier pink pair.

It's arguably thanks to its boom in the '80s that one of my fave prints is so readily available today. Renowned street-wear brands are all about the camo, with pioneers Supreme and Bape forever stocking garms using their own versions of the historical design.

Although many celebs are seen wearing camo at the airport — a space where they don't necessarily want to be spotted — you often see famous faces representing the pattern at shows, award ceremonies, and just about anywhere else. Here are 11 celebs proving the sartorial on-point-ness of all things camo.

If I saw Rihanna walking up the catwalk in this ensemble, I'd be clapping and taking thousands of pictures myself. Though not overtly camouflage, this oversized hooded coat Rihanna designed herself in collaboration with Puma included patchworks of the pattern collaged together with other motifs. Slay!

Opting for a striking camouflage instead of a matching black trouser gave Cara Delevingne's smart look a little street-style flair. Did anyone else notice that she unintentionally matched the carpet? Who wore it better, eh?

This entire look is on-point. Cut-offs are very in this season, and these camo shorts with contrast stripes as worn by rock angel Gwen Stefani are giving me the urge to pull out the scissors and hack away at all my pants.

Hmm, I'm not too sure about the belt-over-jacket scenario. It's a bit too Gossip Girl for me. Aside from that tiny accessory mishap, Garbage front-woman Shirley Manson looked cool as anything in this khaki number. Rolled sleeves on the red carpet added that little carefree edge.

With Kylie Jenner's aesthetic being moderately influenced by street-style trends, it's no wonder that she's ended up sporting the camouflage look over on her Instagram a time or two.

Clearly patterns run within the family, as we can see big sister Kim K dressed in a green hooded camouflage jacket while hanging out on the red carpet with both Rihanna and Kanye West. Squad goals indeed.

As an Orange Is The New Black fan who binge-watched the show's entirety in one go on Netflix, it's a strange but welcoming change to see Samira Wiley (aka Poussey Washington) out of slacks and in this gorgeous camouflage dress. This particular design looks like dappled light shining through a leafy forest.

With street-wear and sportswear being permanently intertwined, it's no surprise that camouflage workout leggings exist. Check out Lena Dunham in her exceedingly stylish yet practical "Florida mom inspired" gear.

There's not a trend that supermodel Kate Moss has left unturned, so it's not all that shocking to see the British babe showing up to a Topshop event in a leafy green one-piece. The black boots, waist belt, and shaggy jacket added that extra level.

Here's yet another Orange Is The New Black star representing the camo trend. Model and actor Ruby Rose celebrated her androgynous style in this statement shirt and matching cap.

Clearly the camo jacket is a pretty typical alternative look, but what do you do when it gets hot? Tie it around your waist, of course. Then you too can look as effortlessly cool as Pretty Little Liars star Shay Mitchell.

It's not exactly clear whether these particular celebs were hoping to be seen in their camo or not, but whatever their intention, they undoubtedly took the classic print in a variety of dazzlingly wild directions.