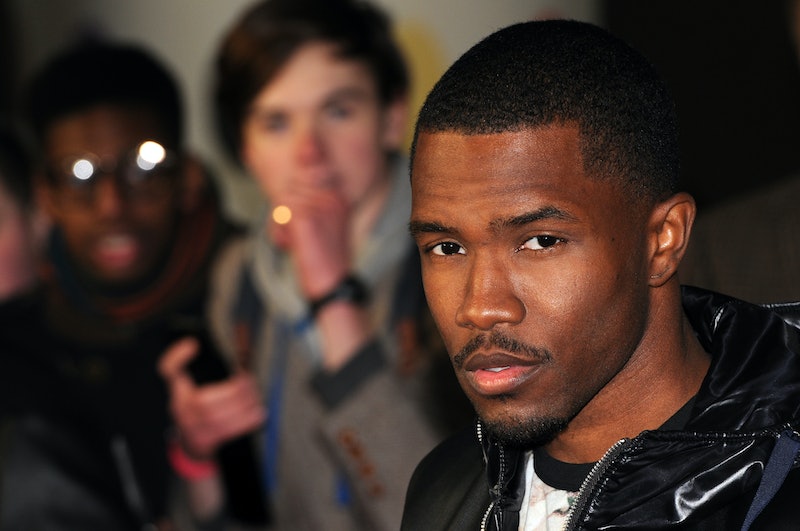 If today feels like the greatest day you've had in quite some time, chances are you bought Frank Ocean's highly anticipated album, Blonde, and have been listening to it non-stop. The album was delayed for quite some times, and that time spent working clearly paid off, judging by the lyrics to Ocean's Blonde songs, which are seriously on point. Bathing yourself in the sweet sounds of the singer's voice in combination with the beautiful beats and his creative lyrics truly may be a step onto the path of enlightenment. Whether they invoke a tear, or a chuckle, or even just a small smile, the well-written lyrics of this album will make you feel so much.

Great thought seems to have gone into every single line in every song on this album, but there are a few that really caught my ear with their wit, poignance, and the passion behind them. Now that fans have finally got the product of Ocean's years-long efforts in their hands, the wait truly feels well worth it, and the 18 great lyrics below show just how much work Ocean put into making this album a must-hear.

1. "Said She Need A Ring Like Carmelo (Hands Up, Oh My God)/Must Be On That White Like Othello (Oh My It's A Real Life Angel)"

Both of the references in this line from "Nikes" are hilarious. First, Ocean compares a woman who's "looking for a check" to Carmelo Anthony, the talented basketball player for the New York Knicks who has never won a championship ring. Then he gets all Shakespeare on us by referring to cocaine as "that white," the drug "Othello" must be on. Othello is an African king in a Shakespeare play who uses "charms" (drugs) to seduce a white woman named Desdemona and later kills her out of jealousy — when he realizes her innocence, he commits suicide, crying about murdering a "real life angel." I dig the topical and literary references.

In this line from "Nikes," Ocean mentions his reaction to the death of 17-year-old Trayvon Martin at the hand of George Zimmerman, a volunteer neighborhood watch coordinator. According to Vibe, when Martin was killed while wearing a hoodie, Ocean posted a picture to his Tumblr of himself wearing a hoodie, captioning it, "suspicious black."

3. "If I Could See Through The Walls I'd See Your Faking"

Genius.com theorizes that "walls" is a colloquial term for "vagina" so this line from "Ivy" is just a funny way to reference that the woman Ocean is singing to is faking her orgasm.

4. "You Kneel Down To The Dry Land, Kiss The Earth That Birthed You/Gave You Tools Just To Stay Alive And Make It Up When The Sun Is Ruined"

This line from "Pink + White" is a beautiful yet heartbreaking visual. It seems to refer to the fact that we come from the earth, but humans are slowly destroying it.

In "Be Yourself," Ocean's mother has a really nice talk about how being yourself is the most important thing. And yet, all I continue to come back to is her calling people who smoke pot "weed-heads" like she's teaching a D.A.R.E class to some angsty tweens.

The opening line from "Solo" really sets the tone for the song about being alone while surrounded, and is also kind of funny. It immediately grabs the attention of the listener because, let's be real, "dirty dancing" by oneself is a fascinating concept.

7. "It Begins To Blur, We Get Older (Blur). Summer's Not As Long As It Used To Be/Everyday Counts Like Crazy (Smoke, Hazy)"

This might be one of the most relatable concepts for me in the whole album. The line, which comes from "Skyline To", refers to the overwhelming feeling that times goes faster as we get older. I. Hear. That.

8. "Now And Then You Miss It, Sounds Make You Cry/Some Nights You Dance With Tears In Your Eyes"

Self Control" is probably the saddest song on the entire album, and that has much to do with lyrics like this. It's like Ocean can tell I started tearing up right before that line or something. It's downright spooky.

9. "Here's To The Gay Bar You Took Me To/It's When I Realized You Talk Too Much, More Than I Do "

"Good Guy" is important namely because in it, Ocean talks about a date he went on with a man. Ocean came out as LGBT in 2012, yet while the world in general may be getting more accepting of the LGBT community, the music industry still has a ways to go. Said T-Pain in a 2014 interview, "I don't think Urban music is getting more gay friendly. If that was the case, Frank Ocean would be on a lot more songs ... I know n*ggas who will not do a song with Frank Ocean just because he's gay." Though it might seem simple to write a song about a bad date, this song and the lyrics behind it make Ocean's tune truly matter.

10. "Why Your Eyes Well Up/Did You Call Me From A Seance/You Are From A Past Life/Hope You're Doing Well Bruh"

This metaphor for a friendship that has seemingly ended in "Nights" is so perfect. Friendships come and go, but it's awfully interesting when someone who's been dead to the world suddenly reappears at the most convenient time.

Andre 3000 kills this reprisal of "Solo." He plays with solo as "so low" throughout the entire song, which is low-key genius. But the line that struck me the most is this one where he references "Geronimo," an expression used to express the exhilarating joy of jumping off a tall something. That is a baller way to demonstrate sadness, and I'm so down with it — though I would be really happy if Andre 3000 wasn't feeling so low.

12. "This Is The Blood, The Body, The Life Right Now/The Hype Right Now/Might Be What I Need"

According to Ocean's Tumblr, he "was raised christian. only had a few friends from different religions growing up. these days i’ve got family from agnostic to islam. my grandmother was pentecostal evangelical. she brought much of that fire and brimstone back to her household." So it's no surprise, really, that a Holy Communion talk ends up in his intense and discordant song, "Pretty Sweet." The line, with its religious vibes, really sticks out in the grand scheme of the song.

Ocean didn't pen this monologue performed and written by the French producer SebastiAn, but "Facebook Story" still has some key words. In the speech, SebastiAn talks about not wanting to friend his girlfriend at the time on Facebook because he didn't see the need when he was with her everyday. Welcome to the internet, SebastiAn, where everything's made up and the points don't matter.

Anyone who's ever been a through a breakup or heartbreak of any kind can totally visualize what Ocean's talking about in this line from "Close To You."

15. "I'm Sure We're Taller In Another Dimension/You Say We're Smaller And Not Worth The Mention"

This rhyme from "White Ferrari" is A) beautiful and B) an interesting look at a two people's very differing perspectives of how they see themselves.

16. "Speaking Of Nirvana It Was There/Rare As The Feathers On My Dash From A Phoenix"

The imagery in this line from "Seigfried" is simple stunning.

17."This Love Will Keep Us Still Blinded By The Eyes (Silence In The Ears, Darkness Of The Mind)"

In "Godspeed," this line repeats a few times, reminding us just how intense love blindness can be. This line is quoting-on-Twitter-worthy.

18. "You Know I'm Africano Americano/And Even If You're Half Japanese/Roots Run Deep"

"Futura Free" is the last song in the album, and as such, Ocean really did his best to close out the album with some winning lyrics. In this line he reminds us that everybody came from somewhere, and roots are important.

Blonde is truly a masterpiece for many reasons. But the poetry behind the lyrics is what puts this album up on the top shelf of musical genius. Be sure to take some time to give it a really in-depth listen and focus on the writing. It's bound to be an intense experience.