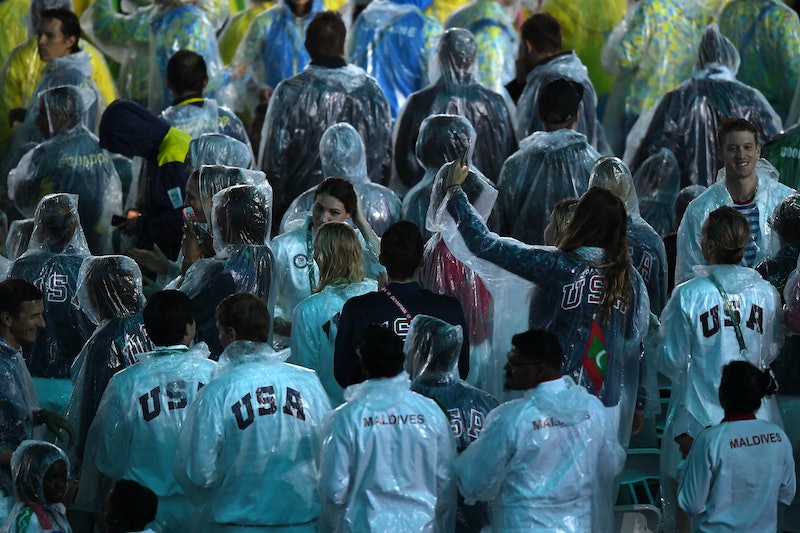 There was a whole lot of dancing, singing and, unfortunately, rain at the 2016 Rio Olympics closing ceremony — a bummer for the spectators and athletes alike at the outdoor Maracana Stadium. While the performers powered through in their vibrant costumes, most athletes were forced to throw on translucent ponchos over their team apparel. But no one can rain on the Olympics parade, and these Olympians didn't let the rain at the closing ceremony ruin their good time.

The heavy downpour began in Rio de Janeiro just minutes after the 2016 closing ceremony began, soaking the athletes as they waited outside the arena. Ponchos were quickly handed out to the Olympians to protect their specially designed outfits.

While it's annoying to wear one of those sticky, unflattering ponchos over your cool, patriotic shirt, some of the athletes decided to have fun with it. After all, this is the Olympics closing ceremony — if you made it this far, a little rain is nothing.

British Olympic rowing champion Helen Glover, for example, posted a photo on Twitter of her and her teammates waiting outside the arena, saying, "Ponchos are in style, right?!" Once inside the stadium, Team Great Britain, ponchos and all, danced and waved their lighted shoes.

Rain? What rain? Here's how these athletes didn't let the rain stop their celebrating at the closing ceremony...

Despite the heavy rain, thousands of spectators still attended the closing ceremony, which celebrated Brazilian culture and highlighted some of the top athletes of the 2016 Summer Olympics, including American gymnast Simone Biles. It's been real, Rio.