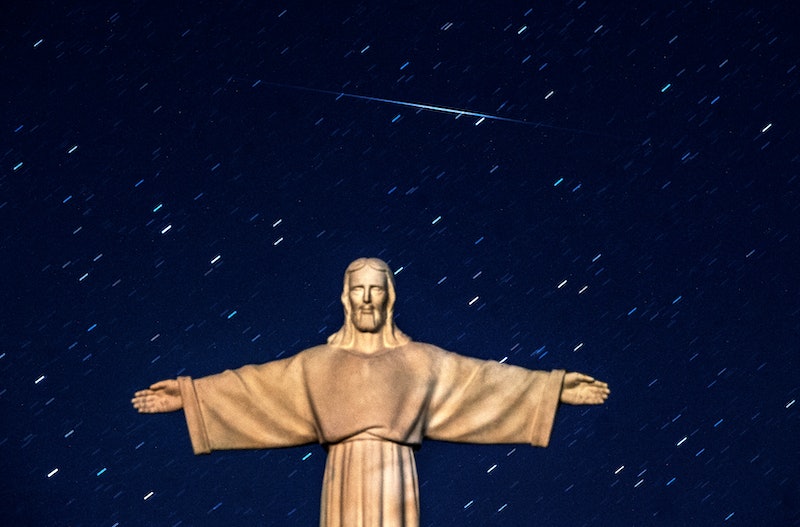 The closing ceremony of the 2016 Olympics was an homage to its host city of Rio de Janeiro — everything from the music to the dancing was inspired by the Brazilian city. During the beginning of the ceremony, dancers dressed as tropical birds, created scenes of Rio, and shaped their collective bodies into sights associated with the city including Sugarloaf Mountain and the Christ The Redeemer statue, which the Rio Olympics has repeatedly incorporated into its meaningful ceremonies.

Rio de Janeiro’s statue of Christ the Redeemer is one of the new seven wonders of the world, alongside China’s Great Wall, India’s Taj Mahal, and Peru’s Machu Picchu. Unlike the other world wonders, however, it’s not very old: the statue, which sits 700 meters above the city, at the summit of Corcovado Mountain, was constructed during the 1920s, shortly after the end of World War I. Nonetheless, the first ideas of the statue are older than the Republic of Brazil itself; in the mid-nineteenth century, a local priest requested funding from Princess Isabel of Brazil to construct a Christian monument on the summit of Corcovado Mountain. More than seven decades after locals first petitioned Princess Isabel for funding, the statue began to be built.

In 1921, the Archdiocese of Rio de Janeiro proposed that a statue of Christ be built and petitioned then-president Epitácio Pessoa to allow for its construction, according to the Daily Mail. Its purpose was to be more religious than decorative or utilitarian: after the end of World War I, many members of Brazil’s Catholic leadership feared the country was suffering from a surge in godlessness.

In February 1922, a year after the Archdiocese’s initial petition, architect Heitor da Silva Costa won the design competition for the statue. The foundation stone for what would eventually become the statue of Christ the Redeemer was laid that same year, although it wasn’t what anyone had originally envisioned.

The statue was originally supposed to be a massive bronze sculpture located on Sugarloaf Mountain, but it was later decided that Corcovado, just behind the city, was a better location. Da Silva Costa’s initial design featured Christ carrying a large cross in one hand and a celestial globe, meant to represent the earth, in the other. In addition to a different location, the statue of Christ the Redeemer that was eventually constructed had a different shape and was made of different materials than what da Silva Costa originally planned.

Instead of holding items in his hands, the Christ figure portrayed has his hands outstretched in a pose that is now associated with Rio de Janeiro. In 1924, da Silva Costa traveled to Europe to seek help from leading engineers. There, he met Paul Landowski, a Polish-French sculptor who was chosen to build the statue's head and hands. In order to support the statue’s massive arms, the structure was made out of concrete, which da Silva Costa called “the material of the future,” according to the BBC. Construction finished in 1931, and the statue was finally open to the public on Oct. 12, 1931.

The 85-year-old statue is undoubtedly a part of Brazilian history — and the most iconic landmark in Rio — but it's also part of Olympic history. On Aug. 5, 2016, the Olympic Torch reached the iconic statue, carried by Brazilian Olympian volleyball player Isabel Barroso Salgado, where it was even blessed by a local cardinal. Multiple Olympic athletes, including Jamaican swimmer Alia Atkinson and the Olympics' first-ever refugee team also visited the statue this year.

"It's already a once in a lifetime experience being here at the Olympics and competing professionally with the best in the world. So imagine what it's now like for us to be in a place as beautiful as this, especially after all we have been through," South Sudanese track star Anjelina Nadai, who competed with the refugee delegation, told Brazilian journalist André Naddeo for Rio2016. For Olympians, tourists, and Brazilians alike, Christ the Redeemer is synonymous with Rio.