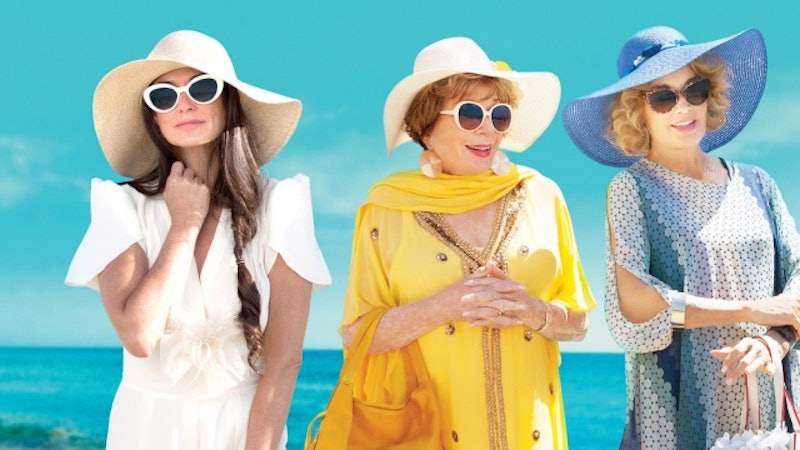 I usually channel surf over to Lifetime when I'm in the mood for a ripped-from-the-headlines murder mystery or an empowering story of survival. But maybe I'm operating on an old conception of the network and its movies. Though Lifetime still does serial killer biopics and dramatized friendships gone wrong, you'll also find a comedy on its schedule now and then. Wild Oats premieres Aug. 22 at 10 p.m. ET, and definitely falls into the lighter genre. The movie stars Shirley MacLaine as a recent widow who gets a new lease on her golden years thanks to a clerical error. She receives $5 million from from her late husband's insurance policy instead of the $50,000 she was due. Before her daughter Crystal (Demi Moore) can correct the mistake, Eva has cashed the check and taken off with her best friend Maddie (Jessica Lange) to the Canary Islands for the trip of a lifetime. I want so much to believe that a couple of women really took the money and ran in the name of cocktails on the sand and vacation flings with younger men. Could Wild Oats be based on a true story?

Wild Oats doesn't seem to be adapted from a real-life experience, but the movie has its own beleaguered history. Deadline reported in 2012 that Dimension Films secured the rights for Wild Oats . MacLaine was attached to star, but at that point, Jacki Weaver (Silver Linings Playbook) and not Lange was set to play her partner in crime. Pretty In Pink's Howard Deutch was in place to direct, though the film ultimately ended up in the hands of Sweet Home Alabama and Hitch director Andy Tennant. The script apparently underwent some changes as well. The Deadline article includes a synopsis of the ladies jetting to Vegas with a windfall in the thousands rather than the millions.

Wild Oats was still languishing in development limbo when Variety announced in 2014 that Lange would be replacing Weaver in the film. The article also broke the casting of Sarah Jessica Parker as Crystal; about a month later, Variety reported that Parker was out and Demi Moore was in. No reason was given for the change.

Filming finally got underway in the Canary Islands in 2014 and it was so eventful that MacLaine wrote a book about the experience, Above The Line: My Wild Oats Adventure, in which she claims that the shoot was plagued with financial and personnel problems. Excerpts from the book appeared on the New York Daily News site earlier this year, and though MacLaine claims that there was a significant budget shortfall, the setting and the company ensured that fun would be had. MacLaine wrote about a particularly eventful dinner with her co-star:

The night went on until everyone left but me and Jessica. The two of us, now completely, staggeringly drunk, decided to engage in an open and honest evaluation of which men in the world we would like to have sex with. Too bad I don’t remember a thing we said after that.

After going through so many changes, Wild Oats will finally see the light of day when it premieres on Lifetime and according to MacLaine's memoir, some actual wild oats were sown in the process.