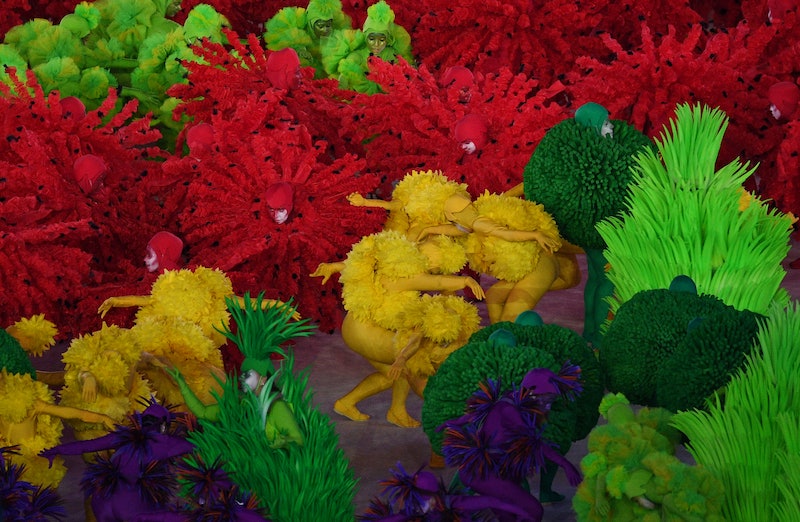 There were a lot of beautiful and bizarre moments at the Rio closing ceremony. There were elaborate headpieces. There were insane light shows. There was the whole Mario montage (and now I can't wait for Tokyo 2020). But for all of the sparkles, dancing and giant skirts, there was one moment that outshone them all. To cap off nearly two hours of eyeball feasting, Rio sent in legions of dancing colorful figures at the Closing Ceremony that went from the Maracana Arena floor and, well, straight into our nightmares.

As International Olympic Committee President Thomas Bach gave his closing speech, there were tiny flashes of lime green that kept appearing at the edge of the screen. What could it be? A security uniform? A bunch of sentient highlighters? But Bach didn't appear to be alarmed, so audience fears were assuaged. Temporarily, at least.

Then, as Bach ended his speech and the final performance began, they descended. Hundreds of them. Colorful, energetic and in various hues of Spandex. En masse, they swarmed the arena floor, separating off in groups of yellow, purple, green and red, undulating as they formed into shapes for the aerial viewers above. As a whole, it was stunning. As individuals, it was completely and utterly horrifying.

It was unclear what, exactly, they were supposed to be. Does Brazil have a packs of dancing fruit and vegetables roaming around cities and in the wild? Is this eventually what happened in Willy Wonka when Veruca Salt turned into a blueberry?

It's all very confusing. But Twitter, at least, had one pretty solid theory on what we witnessed:

The closing ceremony routines are designed to represent something about the country, a message to the world about its history and its cultural import. So what does this say about Brazil? The best that I can figure is that throughout the country, it's a pretty common phenomenon for fruits and vegetables to uproot themselves from gardens to become hordes of dancing broccolis, apples, pineapples and strawberries, which while visually appealing would actually be the absolute worst salad ever. Again, just a theory.

More like this
How To Make The Watermelon, Feta, & Mint Salad Trending On TikTok
By Emma Garza
What Is A “Softboy?” The TikTok Term & Aesthetic, Explained
By Courtney Young
Why Are TikTokers Slapping Each Other With Tortillas?
By Courtney Young
Coastal Granddaughter Is The Latest Summer Aesthetic Going Viral
By Emma Garza
Get Even More From Bustle — Sign Up For The Newsletter