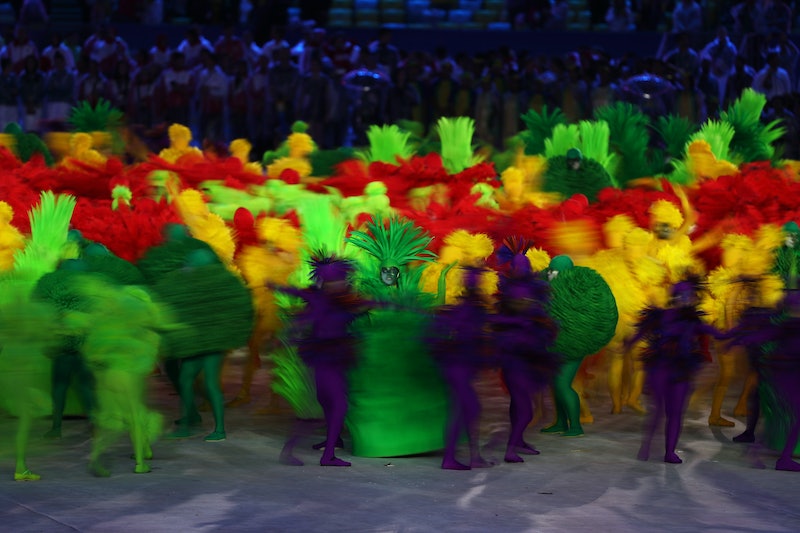 The dancing vegetables were part of a tribute to famed landscape architect Roberto Burle Marx, who designed the beautiful wavy sidewalk patterns at the Copacabana boardwalk. Set to the classic bossa nova hit "Chovendo na Roseira" by Brazilian artist Tom Jobim, the vegetables, which viewed from above resembled Burle Marx's designs, were supposed to evoke feelings of admiration for the famous landscape architect and artist. Instead, they caused speculation and confusion among Twitter users. One user tweeted that she thought she was watching a Fruit of the Loom commercial, while another said she "didn't realize Rio was known for their dancing broccoli".

Perhaps a bit more communication from the organizers of the Closing Ceremony about the purpose for the dance would have warranted less social media head-scratching. Or, it's possible that fewer closeups on the vegetable suit-clad dancers and more aerial shots would have made the entire tableau (which I thought was beautiful) make more sense. But then those watching along on social media wouldn't get to see some of the hilarious reactions.

A Lot Of People Were Really Confused

Because, apparently, nothing says Rio Olympics like a bunch of dancing veggies, right?

And Some Were Horrified

I see next year's biggest horror flick in the making.

Others Were Mesmerized By Their Weirdness

It was pretty spectacular when you get past the idea that they're supposed to be life-sized vegetables prancing around for humans to watch.

Some People Got Hungry

This Person Really Put It In Perspective

When you put it that way...

While the out-of-context dancing vegetables were certainly strange, they added unique color and flavor (pun intended) to the Closing Ceremony. It wasn't the Japanese PM shooting out of a Mario warp pipe, but it sure was something.

More like this
This Dog Food Is Not Only Super Healthy For Your Pup, It’s Also Better For The Planet
By A. Graham
If You Have A Dog, Trainers Say These 30 Clever Things Will Genuinely Make Your Life Easier
By Dena Ogden
The 4 Best No-Scratch Sprays For Cats
By Masha Vapnitchnaia
Your Dog Could Be So Much Better Behaved If You Tried Any Of These 25 Tricks
By Claire Epting
Get Even More From Bustle — Sign Up For The Newsletter