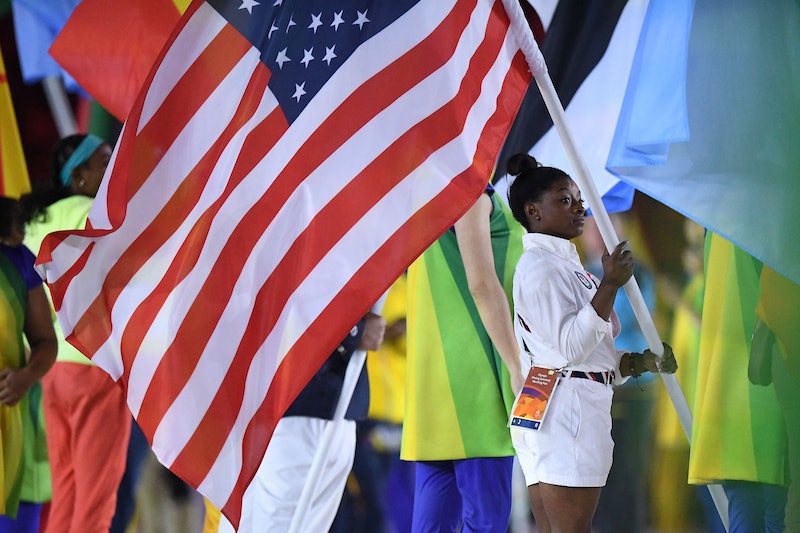 At just 19 years old, the newly crowned Olympic gymnastics queen Simone Biles is incredibly accomplished, and she knows it. Biles is truly among the greatest athletes of all time, a fact which she cemented via her Twitter account, just in case anyone had forgotten. "Michael Phelps taught me how to stack my medals," Biles tweeted Sunday before the Closing Ceremony, reminding everyone that she is one of the best, while nodding to Phelps' own accomplishments.

Biles has no inhibitions about letting everyone know she's incredible, and she totally shouldn't. She was one of the best and most exciting athletes at the Rio games, and her historic medal cache earned her a well-deserved place in history. This Olympics has made Biles a star and a household name, just like Phelps, and that's definitely something anyone in the world would want to tweet about.

This isn't the first time that Biles has rightfully insisted that she is Phelps' equal. In response to some subtly sexist coverage she received during her competition, Biles wanted to let people know that she shouldn't be compared to men, or to anyone for that matter. "I'm not the next Usain Bolt or Michael Phelps. I'm the first Simone Biles," Biles told reporters just after her win at the individual all-around competition. She also shared the cover of Sports Illustrated with Phelps and Katie Ledecky, once again proving that she and Phelps are on the same level of fame and athletic skill, but are also unique individuals.

And Biles really needs to project that confidence because now she's a really important role model for young girls. Society often still discourages girls and women from taking pride in their own achievements, no matter how hard they worked or how impressive they are. Biles' pride and ownership of her accomplishments in Rio is inspiring for everyone, but it's especially important for all the girls who are now looking up to her to see a young woman who believes and takes pride in herself.

Biles' tweet is actually a simple sign of the qualities that made her a champion in Rio. Her assuredness in her own excellence is evidence of a level of confidence that goes well beyond her years. She's still a teenager, but she just won the most high stakes international competitions in one of the most physically demanding sports in the world, and that's definitely something to be proud of. Biles didn't need to remind anyone of how amazing she is, but she totally has the right to.