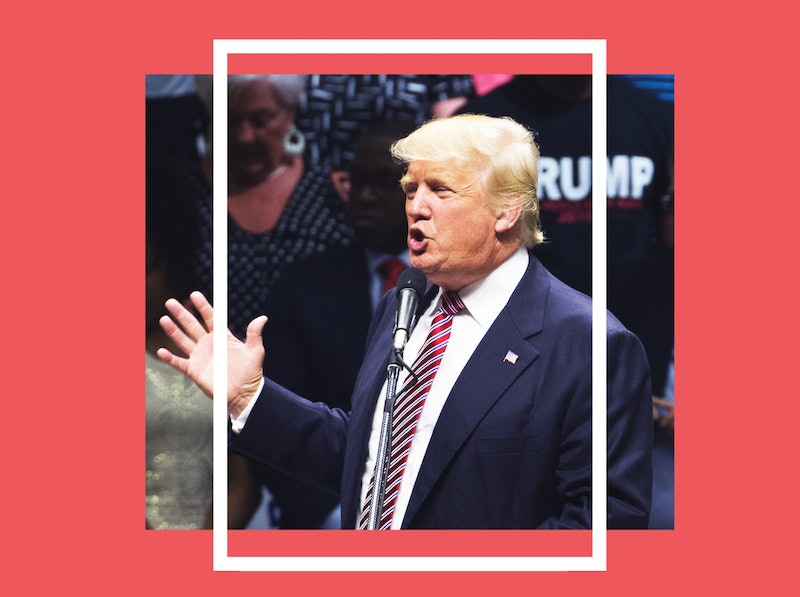 If you're able to wade through the vast amounts of offensive comments that come out of Republican presidential candidate Donald Trump's mouth, you may notice an inconsistency that's deeply worrying to activists for reproductive rights in America. Trump is seriously, upsettingly inconsistent when it comes to abortion, with The Washington Post tracking him taking five different positions on the issue over three days. With that in mind, a Republican White House with Trump at its head might seem like the greatest threat to reproductive rights and abortion access in the United States right now.

But that's not the full story. After the 5-3 strikedown of Texas's restrictive abortion laws in June by the Supreme Court, anti-abortion activists are increasingly marshaling for new fights, and a lot of it will be on the state level, away from Trump's direct interference. That's right: Trump is actually just one of several threats to reproductive rights on the horizon. The picture at the state level is an interesting and depressing one. The Jurist, in a reflection on the 5-3 Supreme Court decision, did a rundown of current restrictive state laws on abortion and came up with "informed consent" procedures, 24 to 72-hour waiting periods, "mandatory descriptions of ultrasounds," and laws aimed at making abortions prohibitively expensive.

If you want an accurate image of the plight of reproductive rights across the nation, take a peek at ThinkProgress's infographic, which details everything from restrictions on insurance for abortion to laws about parental consent and compulsory "counseling." A whooping 25 states have the full breadth of these legal restrictions in place. You may be getting the picture now: While Trump's presidency might encourage anti-abortion activists and legislators, he's hardly at the root of the problem. Here are four challenges to reproductive rights happening around the United States right now that may make Trump the last thing on your mind.

1. The Rise Of "Crisis Pregnancy Centers"

Even though the Supreme Court struck down Texas's restrictive abortion laws as deeply unfair to women seeking safe, legal abortions, that's not the end of the state's fights about reproductive rights. One cause for concern is the rise of "crisis pregnancy centers," which offer some reproductive services to expectant mothers, but otherwise actively counsel and obstruct distressed women seeking an abortion from having one. Planned Parenthood is pretty blunt about it; they call crisis pregnancy centers "fake clinics run by people who are anti-abortion... [with] a history of giving women wrong, biased information to scare them into not having abortions."

In some cases, such clinics are state-sanctioned. The Houston Chronicle reported earlier this year that a whopping $1.6 million of Texas's entire $18 million budget for reproductive health has been given to The Heidi Group, an anti-abortion Christian nonprofit which is behind a collection of crisis pregnancy centers. The $1.6 million is an annual contract, and represents a seriously worrying precedent for those worried about reproductive rights in the state. The Heidi Group's founder, Carol Everett, is a vocal anti-abortion advocate who, according to The Houston Chronicle, doesn't believe in abortion even in rape cases, and has released a book called Blood Money: Getting Rich Off A Woman's Right To Chose.

Crisis pregnancy centers are a concern across the country. Salon, which investigated CPCs extensively in 2015, wrote that "CPCs — which now outnumber abortion clinics by an estimated 3 to 1 — can be misleading, manipulative or downright coercive, pushing a distinctly antiabortion agenda that relies heavily on lying to clients. Investigations have time and again uncovered evidence that these centers, many of which are religiously affiliated, purposely attempt to portray themselves as secular medical providers that provide comprehensive care for women facing unintended pregnancies. They don’t, though, and often don’t even have licensed medical professionals on the premises." CPCs are given state funding, according to a long investigation by Cosmopolitan, in a wide variety of states, from Pennsylvania and South Dakota to Louisiana.

The next fight in Texas about reproductive rights will be rather a strange one. Governor Greg Abbott quietly put a law up for discussion in early July 2016 that would require all aborted tissue, no matter how long the pregnancy had been, to have a funeral or cremation. His spokesperson told The Houston Chronicle that "Gov. Abbott believes that defending the sanctity and dignity of human life is worthy of immediate action."

Salon points out that legal funerals in the state require a funeral director and other legal accouterments, and that this legislation could therefore vastly increase the cost of an abortion beyond the reach of most women. It would also be incredibly difficult to enforce, as there's no guideline on how on earth one cremates or buries a small collection of cells, an ectopic pregnancy, or a miscarriage (which would likely be covered under the law). The Texas Medical Association and Texas Hospital Association sent a joint letter to lawmakers asking, almost facetiously, if the rules, "if adopted as proposed, require a woman who experiences a spontaneous miscarriage to carry the fetal tissue to a physician’s office or other health care setting for assessment." (Currently, tissue from abortions is disposed of via incineration or in sanitary landfills.)

That may be part of the point, though the clear motivation is to make women who have abortions feel as if they have "killed" a child. The law was up for debate among lawmakers at the beginning of August, but the Texas Observer, for one, was having none of it. "These new regulations," the paper commented, "solve no existing problem, create a host of pointless burdens not just for abortion providers or medical professionals but also for those in the funeral business, and they could cause the cost of ending a pregnancy to skyrocket for families."

On November 1, the Florida Supreme Court will hear the first arguments in a challenge to one of its restrictive reproductive regulations: the mandatory 24-hour waiting period between deciding to have an abortion and actually being allowed to have one. The waiting period was signed into law by Governor Rick Scott in July 2015, but quickly challenged as a violation of the "undue burden" law surrounding abortions.

The Miami Herald has pointed out that Florida's hardly unique. It's one of 26 states that have waiting periods in law, from 18 to 72 hours, supposedly to prevent women from being coerced into having one and to ensure they seriously consider their decisions. Opponents of the law argue that it represents a serious burden to women who may not have the time or the money to visit a doctor twice within 24 hours, particularly if a clinic is far from their home. Both sides of the debate will be watching Florida's Supreme Court judges hear the arguments in November, but the law has been halted until they make their decision. Interestingly, of the Court's justices, five out of seven of them agreed to hear arguments against it.

4. The Bad Science Of "Abortion Reversal"

South Dakota, Arizona, and Arkansas all have, or will soon have, laws in place that demand that doctors, against their better medical judgement, have to tell all women considering the abortion pill that they can "halt" the abortion partway through and reverse it. The problem with such laws? They're based on unproven, and frankly very dangerous, science. The entire idea comes from one doctor, Dr. George Delgado, who claims that his mechanism can stop the two-pill process through which medical abortions occur. First a woman takes a mifepristone pill to block hormonal production, and then misoprostol to induce the actual abortion.

Delgado suggests that a large dose of progesterone taken after the mifepristone can "reverse" the procedure. But as the American College of Obstetricians and Gynecologists told The Daily Beast, there's a reason that two pills are involved in the process. They estimate that interfering with progesterone will not help in any way. If women change their minds after taking the first mifepristone pill, pregnancies will continue in only 30-50 percent of cases, and progesterone doesn't seem to have much "reversal power" to stop that.

Louisiana's intrigued by Delgado's proposal too, erecting an "abortion reversal clinic" in New Orleans and debating it in the state's House. But the fact remains that the science indicates that he's likely wrong. The only study done on it has been on only six women, and conducted by Delgado himself. The ACLU’s Reproductive Freedom Project flat-out called it "bad medicine," while Ibis Reproductive Health labelled it "kind of crazy." The big problem, to be clear, isn't with Delgado's idea. If it turns out, against the odds, to work, then it's a valuable scientific discovery. The problem is that unproven science has now been signed into law in several states as certain medical fact. Come on, guys. This isn't funny.

These sorts of measures, and their purview firmly on the local and state level, make it clear that it's not just the presidential election that needs to be watched this year. We need to pay attention to state representatives and how they work for (or against) women's rights. It's definitely massively important for reproductive rights to make your voice heard in the 2016 national election. But make sure that, in your state, you keep on top of how your representatives are acting when it comes to your rights and your body — and vote locally as well.

More like this
How To Fight For Reproductive Rights, Based On How Much Time You Have
By Courtney Young
5 Ways To Stand In Solidarity With Women In America From The UK
By Sophie McEvoy
The UK Abortion Laws In 2022, Explained
By Sophie McEvoy
Why You're Seeing Green Bandanas At Abortion Rights Protests
By Lexi Inks
Get Even More From Bustle — Sign Up For The Newsletter