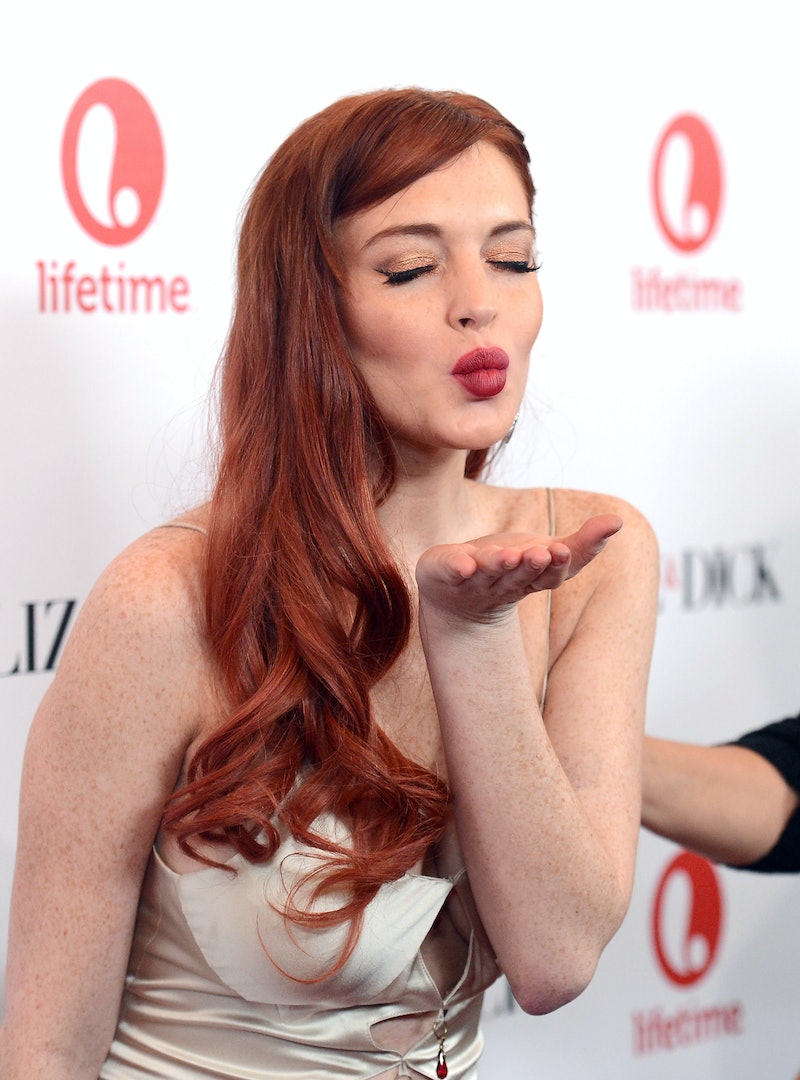 Around April of last year, I was wading through the general misery pit that is OK Cupid when a particular profile caught my eye: 24-year-old New Yorker, 77% match, and not one, but three, profile pics of someone who was clearly Supernatural star Jensen Ackles. Each was captioned innocuously enough — "Very fun photoshoot I did a while ago," as he smolder-stared next to a pool — but I was not to be fooled. So, I immediately messaged him with a brief "…Really?"-themed note (signed "Someone With Eyes") and went on about my life. Now, though, I'm wondering whether I should have given him more of a chance after reading The Hollywood Reporter's latest exclusive with Tinder CEO Sean Rad, who says that a surprisingly high number of celebrities actually do use Tinder — including Lindsay Lohan, Ashton Kutcher, Josh Groban, and Jamie Kennedy. In fact, the app has garnered so many star users that Rad plans to install a verification system, similar to Twitter's checkmarks, which will allow these famous faces to prove they aren't just trolls.

After the app blew up among Olympians at Sochi, it wasn't out of the question to imagine some high-profile users lurking in that endless Polaroid pile. However, the Olympic boon did seem rather situational (we're all here, just for these few days…); when it comes to big Hollywood names, the trend is worth wondering about — if only because, as I posed it to my questionable celeb so long ago, "I'm intrigued by the fact that you feel you need a dating site to seek out female companionship, as opposed to the sheer fact that you're, y'know, Jensen Ackles." Still, it's apparently happening, reason or no — so, to better prepare us all for catching "Lindsay Lohan (ACTUAL)" in our daily swipe-through, here are five motives a celebrity might have for exploring the vast and wonderful world of Tinder:

1. For the Usual Reasons

Hey, famous people need love, too — or, well, if not "love," then at least the other thing. Though it's still unclear to me why sheer celebrity cachet wouldn't work in attempting to get a date (or, the other thing), using the app does make things notably simpler, especially for the star on the go. Because Tinder, even more so than its predecessor Grindr, is essentially Hot or Not with a GPS; it functions on what my friends and I call "The Binary Rating System" (because we are nerds) — 1 or 0, "Would bang" or "Nah, brah," swipe-right or swipe-left — with the added bonus that, if you're rating someone at any given moment, they are within reasonable booty-calling distance. In that way, catching a verified celeb on Tinder could threaten to expose his or her inner horndog — though it is entirely possible that...

Ashton Kutcher is engaged to the eminently cool Mila Kunis, so unless there's something we really don't know about their relationship, I'd be hard pressed to imagine him legitimately chasing tail on his iPhone. However, Kutcher did first made his name with prank show Punk'd, and I'd be willing to bet some of that "LOL, GOTCHU" spirit still lurks within him. Why not use it to prank unsuspecting Tinder-ers with outlandish messages? I mean, there is some precedent here: Michael Cera published the transcript of his cheeky texting back-and-forth with a mysterious wrong number named Jeremy — including, say, claims that he was coming to Jeremy's party with a vat of soup. Plus, in case Ali Reed's "Worst OK Cupid Profile Ever" didn't hammer it home, let me assure you from my friends' and my jokey Tinder experiments that some people will keep any conversation going if there's even the sliver of a promise of, ahem, affection down the line:

That conversation continued for over an hour. Now, imagine how much the probability of "I'll talk to you no matter what" would increase if that promise came from a verified celeb? Pure trolling gold.

I'd wager that most of these celebs already have assistants — but why pay someone when you can get an adoring fan to do it for free? Sure, there are some tasks a stranger shouldn't handle (e.g., picking up prescriptions), but for the more innocuous tasks — and given a reasonable "You're not a psycho fan" screening — there's no reason not to send willing would-be-paramours on the job. I mean, would you turn down Groban if you received the following?

I think not. In fact, you would probably screenshot the message, then Instagram 17 pictures of yourself with his starched shirts. Which leads me to...

4. They Want to Give Fans an Ego Boost

Seriously, how stoked would you be if you swiped right on, say, Dylan Sprouse, only to find that he'd swiped right on you, too? (No verification yet that either of the Sprouse boys are Tinder users — but hey, a girl can dream.) Your attraction to the person aside, even just on a "connection to a famous person" level, that's bound to brighten your day (and merit an instantaneous social media share of some kind). Beneficent celebrities could take five minutes every once in a while just swiping right on every single person they come across, knowing that they were doing hundreds of wee good deeds. On the other hand, it's honestly more likely that...

5. They Need an Ego Boost Themselves

Because, let's be honest, when it comes to these famous faces, just about every single swipe-right is going to turn into a match for them. Unless you're like that NYU professor who gave James Franco a D in drama and want to screw with them just because you can (allegedly) — I've gotta be honest, with Jamie Kennedy, I'd be tempted. Mostly, though, scrolling through Tinder would be an instant "You love me! You really love me!" (or at least, "Would bang") affirmation — which someone with, say, LiLo's sometimes iffy press might honestly cherish. However, this does bring up the issue of the dreaded "accidental swipe-left": With the news that Tinder may soon contain these hidden celebrity gems, we'll all have to be extra careful with our directionals — lest we let one slip through our fingers, as I did so many months ago. (Okay, it probably wasn't Jensen Ackles — the real actor is 36, not 24 — but still: Jensen! Call me! I'd totally swipe-right you!)

More like this
Yes, That's Lindsay Lohan's Sister Singing In The 'Falling For Christmas' Movie
By Radhika Menon
Lindsay Lohan Just Recalled A Hilarious 'Parent Trap' Story
By Sam Ramsden
Robert Pattinson & Suki Waterhouse Made Their Red Carpet Debut — 4 Years Later
By Jake Viswanath
Taye Diggs Met His New Girlfriend In The Most 2022 Way Imaginable
By Jake Viswanath
Get Even More From Bustle — Sign Up For The Newsletter