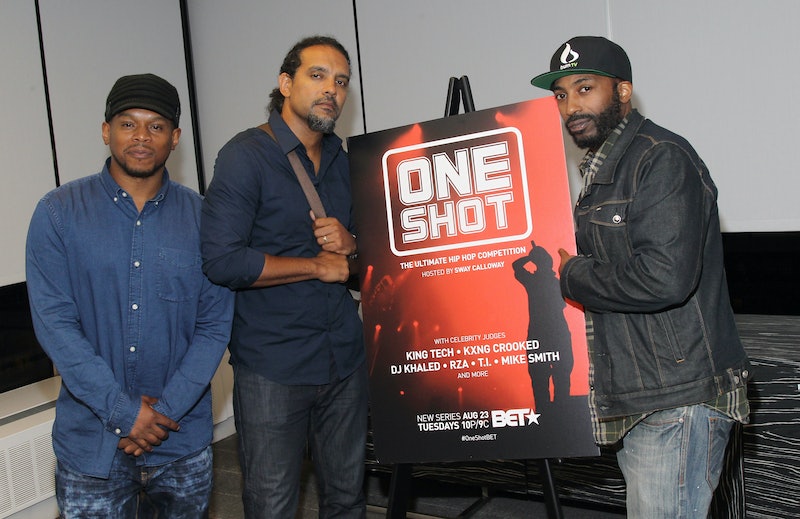 On the new BET series One Shot, aspiring rappers will get the same chance to audition for a panel of esteemed judges that vocalists got on American Idol, The X Factor, and The Voice. While there are plenty of famous rappers, those who are unknown have never gotten the chance to audition for a series like this one, especially with a cash prize of $100,000 given away at the end. One Shot comes from the mind of rapper KXNG CROOKED, and he'll be traveling around the country with several of his closest collaborators, including DJ King Tech, who will also be featured on One Shot.

Just like every single member of the panel on American Idol or any of the other competition reality shows, from Chopped to Project Runway, has their own unique point of view, the members of the One Shot team will offer different types and forms of advice to the contestants hoping to be the next wildly successful rapper. While every member of the traveling group of judges and mentors will add something important to the mix, King Tech will be especially useful to the group. But while he has the bona fides to make himself valuable, he's also not quite as famous as some of the people he's worked with. So in the interest of getting to know the people behind One Shot, here are the basics on DJ King Tech.

He's Originally From The Bay Area

That's where King Tech and Sway met — these two talk about going to high school together and dreaming of rap careers in the above clip from behind the scenes at One Shot.

He's Worked With Some Amazing Rappers

King Tech may not be an A-list crossover radio star, but he's important enough to the hip hip scene that he's A great example is the single "Anthem" from 1999's This or That, which features such luminaries as Eminem, Xzibit, the RZA, Tech N9ne, DJ Revolution, Kool G Rap, and more.

He Has Four Albums With Sway

This duo has a long history, dating back to their debut album, Flynamic Force in 1988. Since then, they've had three others and tons of singles.

His Late Mentor Is Huge

According to an interview with Hip Hop DX, King Tech says one of the first people to help him and Sway break into the music industry was NWA member Eazy E. "He showed us a lot of love, drove us around L.A., took us to his house. He was a great dude," King Tech explained.

A key lyric in Eminem's "Lose Yourself" is now the title of the MTV series, and it's a fitting borrow, since King Tech and Sway's This or That feature was one of his first milestones. Yes, The Slim Shady LP was released within the same year, but his appearance on "Anthem" helped him blow up just a few years after his first album in 1996.

And alongside all of that work in music under his belt, DJ King Tech has also seen the business from a totally different perspective: he's been a radio host alongside Sway for years, and their candid approach and their longtime friendship and business partnership makes them a great pair. Now we'll get to see the two of them discover the next great rapper on One Shot.