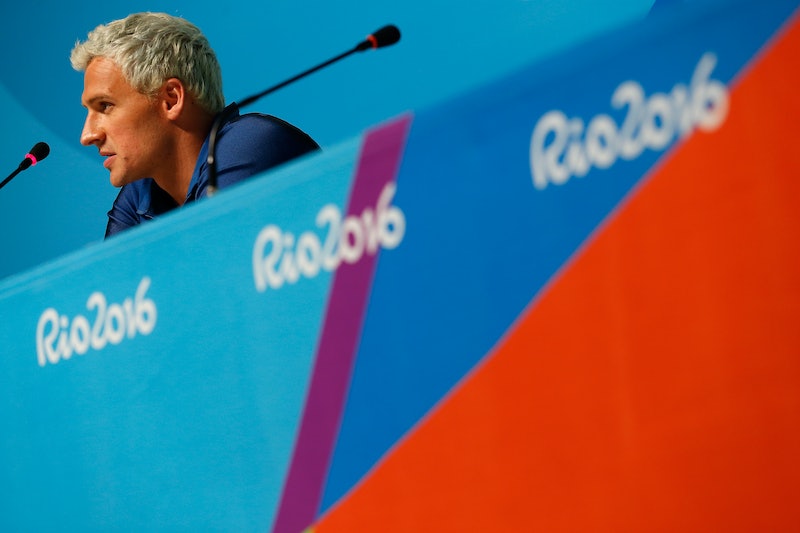 For some Americans leaving Brazil after the Olympics, saying goodbye to Rio also meant apologizing on behalf of disgraced swimmer Ryan Lochte. On a board set up at the Rio airport intended for passengers' farewell messages to the Olympic host city, Americans apologized for Lochte's behavior before they boarded their planes home — which makes sense, since Lochte's disrespect for the city could not be more appalling.

Lochte finally admitted to vandalizing a Rio gas station while intoxicated on Aug. 14, but only after he fabricated a story about being robbed at gunpoint. So not only did he lie, but he also insulted Rio in his assumption that people would believe such an incident could have easily taken place in the Brazilian city.

Additionally, the 12-time Olympic medalist left Rio before authorities realized he'd lied. This only made the situation worse, since Lochte left the three teammates who witnessed his behavior on to face questioning, fines, and shame on his behalf. On Monday morning, Lochte appeared on NBC's The Today Show, where he took full responsibility for the destruction of the gas station, as well as the lie that followed the incident. Lochte told Today host Matt Lauer, "I over-exaggerated that story, and if I had never done that we wouldn't be in this mess... I just want to say I am truly, 110 percent sorry." However, Lochte's apology feels like too little, too late, which left many Americans at the Games feeling like they needed to apologize on behalf of the swimmer.

The most repeated message on the boards at the Rio airport was simple: "Sorry about Ryan Lochte." Clearly, many Americans were ashamed of the Olympian, and wanted to make this known to the host city.

The Rio Olympics were undeniably successful, especially for Team USA. However, Lochte's behavior clearly tarnished the games, and the American team's victories. Needless to say, Lochte let down his teammates and his country at the games. And he'll pay the price; sponsors have already begun dropping Lochte, and there is an International Olympic Committee investigation into his behavior.

So yes, it makes sense that Americans felt the need to apologize for their swimmer as they left Rio on Monday, thus treating Brazil with the respect it did not receive from Lochte. Though Lochte told Lauer that he "learned some valuable lessons" from his experience in Rio, it certainly seemed as if Olympic attendees learned the same lessons much more quickly: apologize. At least the apologies at the airport seemed genuine, which can hardly be said for Lochte's late apology.