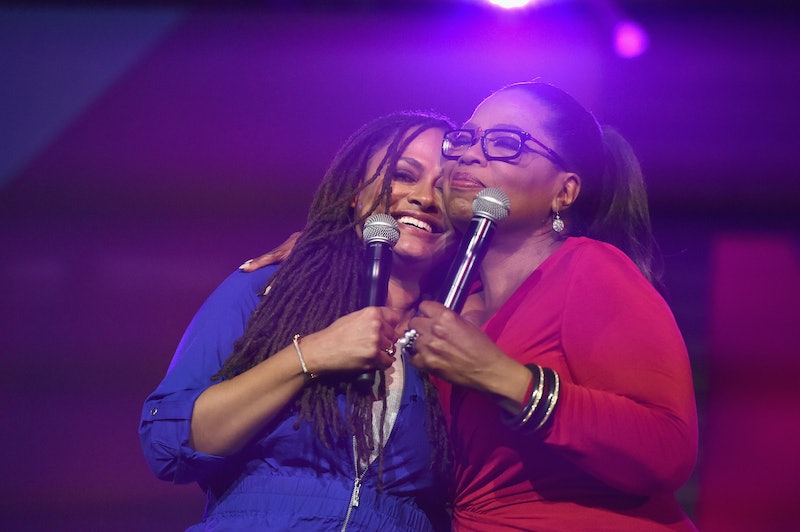 Director Ava DuVernay has made no secret over her aversion to the word "diversity." Earlier this year, she told The New York Times, "I hate that word so, so much." So you can bet that when she and Oprah Winfrey — arguably two of the most powerful women in Hollywood today — sit down to discuss the topic, they offer up a better way of talking about the idea. In an interview with The Hollywood Reporter, DuVernay and Winfrey replaced "diversity" with something far better. They referred to the need for inclusion of many different people at the table.

Winfrey explained that DuVernay has adjusted the vocabulary she uses to talk about diversity:

I used to use the word 'diversity' all the time. 'We want more diverse stories, more diverse characters...' Now I really eliminated it from my vocabulary because I've learned from her that the word that most articulates what we're looking for is what we want to be: included. It's to have a seat at the table where the decisions are being made.

Providing a space for everyone is what the entertainment industry needs to focus on. When the experiences of people of color are included from the beginning, the work is relatable to a wider audience, and better for everyone. Filmmakers who embrace a variety of people are not indulging "diversity" — they are focused on providing a sense of belonging for those who are not white men, who are used to hearing and seeing their stories told.

Beyond telling such stories, inclusion means having people of color actually tell these stories themselves. While white people have certainly brought the stories of black people to the big screen in the past, as DuVernay told The Hollywood Reporter, "I believe there is a special value in work that is a reflection of oneself as opposed to interpretation. When I see a film or a TV show about black people not written by someone who's black, it's an interpretation of that life."

In the interview, the pair also discussed DuVernay's latest project, a TV series about siblings who inherit a sugarcane farm in Louisiana called "Queen Sugar," which is based on author Natalie Baszile's 2014 novel of the same name and will be broadcast on OWN in September. They also spoke about DuVernay's film adaptation of Madeline L'Engle's A Wrinkle In Time, in which Winfrey has been cast. Queen Sugar features a largely black cast and many women of color behind the camera, which represents the inclusion that the women speak of and advocate for.

As Hollywood works to highlight new points of view, it's important for creators of culture to keep in mind the need to bring in those who have different experiences. Including more narratives in the films and TV shows that are produced benefits everyone.