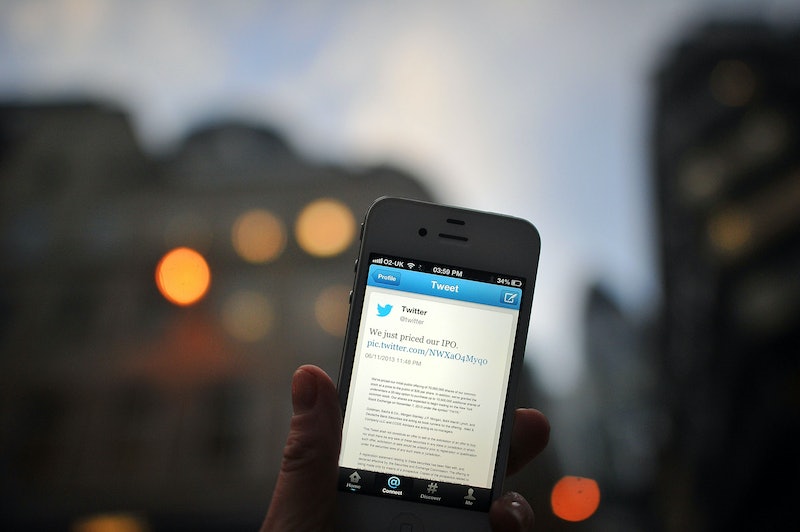 For those of you with a bad bed-tweeting habit, today is a good day: Twitter has introduced night mode for iOS devices. The update today comes nearly a month after the same feature arrived for Android users, and it's been a heavily anticipated one, indeed. I feel like I should make a "tweets after dark" joke here or something, but... let's just not and say I did. We all know we're thinking the same thing anyway.

In a tweet issued at 12:25 p.m. EST, Twitter announced the arrival of night mode for iOS with a quick tutorial GIF and a link to their updated support page. The concept is ultra-simple: If you go to the "Me" tab and tap the gear icon, "Turn on night mode" is now an option. Once night mode has been activated, the white background of your Twitter feed should shift to a deep, serene navy blue, and will remain that way until you manually switch it back. It's very chill, as well as very conducive to binge-following "Daddygate '16" at 3 a.m. or live-tweeting the monologue your significant other is currently performing in their sleep. I might just keep this mode on permanently. (Thus far, there's no way to set night mode as an automatic nighttime shift; I guess our smartphones aren't that smart.)

But the altered background provides more than just a new vibe; it's been designed to alleviate some of the eye strain that comes with smartphone use — and, more specifically, smartphone use in the dark. If you've ever scrolled through Twitter once the lights are out, you know what I'm talking about.

Though no definitive studies have been conducted yet, a number of medical professionals have speculated that smartphone overuse can permanently damage eyesight, due to a combination of small lettering, bad reading habits (holding your phone too close to your face), and consistent exposure to blue-violet light. Night mode doesn't necessarily address any of these factors, but it does make late-night tweeting noticeably easier. So. There's that.

For the curious, here's what the before and after looks like, courtesy of Bustle editor Lucia Peters:

I mean, hey, at the very least, it looks cool, right? And if it's got added benefits for our eyesight, so much the better.