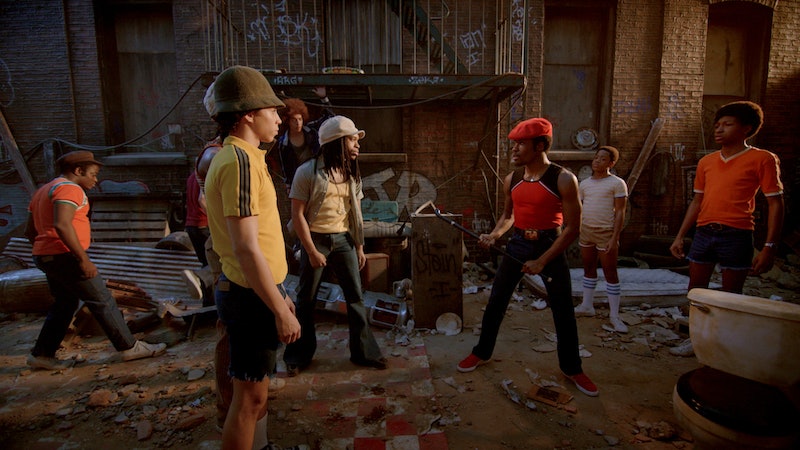 Netflix's The Get Down is a fast-paced, stylized look at the late '70s in New York City and the early days of hip hop. Over the course of the series, a group of young up-and-comers known as The Get Down Brothers meet a plethora of personalities in the burgeoning hip hop scene, ranging from fictional characters created for the show to fictionalized portrayals of real people like Grandmaster Flash and Keith Cowboy. Towards the end of Season 1, Part 1, The Get Down Brothers meet the crew that will prove to be their rivals, The Notorious Three. The group consists of three young MCs who associate with DJ Kool Herc, who was a very real figure. But are The Notorious Three real as well, or is the group another fictional creation for the series?

The Notorious Three, much like their rivals The Get Down Brothers, are a fictionalized hip hop group that are reminiscent of a popular structure for groups at the time. While The Get Down Brothers seem to be modeled after larger crews like the Furious Five or the Funky 4 + 1, The Notorious Three seem to represent the popular format of the hip hop trio, like these three pioneering groups.

The Notorious Three are comprised of three MCs, one of whom does double duty by working the turntables as he rhymes. Run-D.M.C. made it easier on themselves by having one member, the late Jam Master Jay, focus solely on the music while MCs Rev-Run and D.M.C. focused on rhymes. This trio ended up influencing hip hop in a major way by showing that rock music could be remixed for hip hop, just like earlier DJs used disco records to create rap beats.

...and don't forget Spinderella! One of the first major hip hop trios to get national attention, Salt-N-Pepa proved that hip-hop wasn't just a boys game. By having women on the mics and behind the turntables Salt, Pepa, and Spinderalla became an early example of how having two MCs playing off of each other could add new opportunities for fun and interesting lyricism.

The clearest influence on The Notorious Three's lyrical style is the Beastie Boys, who started their career with novelty hits like "(You Gotta) Fight for Your Right (To Party!)", but over the course of their career proved that they could actually rap. While most rap ensembles split up a song by having different MCs do full verses, the Beastie Boys were known for shifting effortlessly from one MC to the other every few lines, sometimes with one line being started by one member and finished by another. This lyrical delivery is mirrored by the Notorious Three, who share rhymes and often all shout out the last word in any given line, a classic Beastie Boys move.

Sometimes the best way to communicate the truth to an audience is with selective fictional choices. While attempting to portray a real hip hop trio for The Get Down may have added authenticity to the series, it proves to be just as effective by creating a realistic group that highlights what made hip hop trios so successful. This probably won't be the last viewers see of the Notorious Three and any fans who want to know what to expect when The Get Down Season 1, Part 2 is released in 2017 should study up on classic trios now.