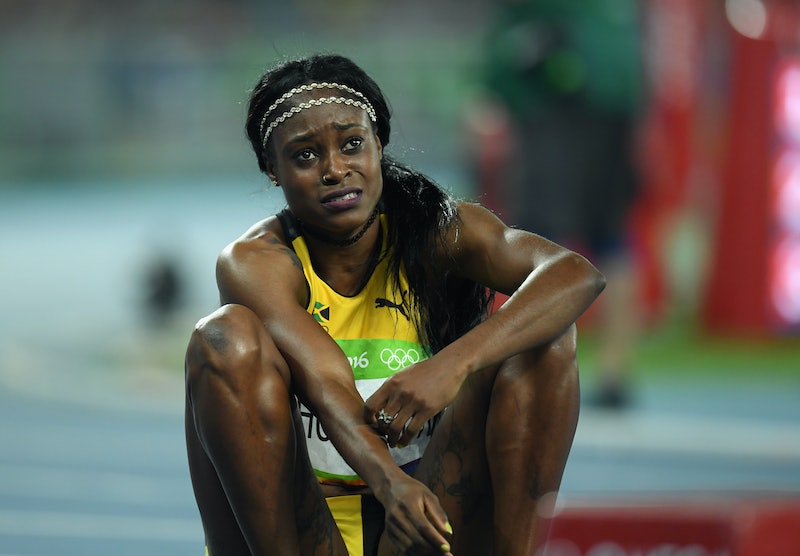 We all want to wake up looking like Beyoncé, but let’s be honest: No one is flawless all the time. That’s especially true if you’re a runner or someone who likes to work out a lot. While our Instagram feeds may be crowded with countless fitness models that make exercise look easy and epic — most likely because their “workout” is part of a professional photo shoot — that’s not what real life is like. As a runner myself, I understand the complicated emotions that arise when finding your professional race photos online. They say internet race results are forever… well, so are photos.

Though we may feel like superheroes crushing some serious mileage, on the outside, we sometimes look tired, drained, and, often, in pain. It’s practically inevitable, and certainly not rare. Besides, a pretty race photo doesn’t get anyone anywhere in life (well, unless you’re Ridiculously Photogenic Guy).

Trust me, I know from firsthand experience. I ran cross country in high school, where the majority of race photos were taken by my mother. Nearly 10 years later, my race photos still aren’t ones I'd use as a profile pic. Need proof? This is 2006 versus 2015:

Yeah, rough. The funny thing is, in 2006, I felt just how I looked — tired, nervous, and wanting the race to be over. But in 2016 (the photo on the right), I was ecstatic at the moment that picture was taken... even if it doesn’t look like it.

The more I started racing as an adult, the more I wondered how the race course’s professional photographers managed to always miss the full range of emotions that happen throughout a race. Races typically follow a progression: the good (this is so exciting, I feel great!), the bad (mid-race thoughts of, "What have I done?! Why?!"), and the ugly (tired, thirsty, and hobbling through pain post-race).

To highlight what’s real when it comes to fitness photography (and not the filtered BS you see on Instagram), we asked runners of all levels to share their personal race photos throughout various stages on race day, along with their thoughts behind the snapshot. Because whether the photo is one you'd put on your refrigerator, they tell often a deeper story about perseverance.

Before The Race: The “Good”

Pre-race, emotions are usually the most intense. Running itself generates a whole slew of feelings, ranging from irritation to excitement to patience. On race day, they all come into play — the dangerous combination of an adrenaline rush, nerves, and doubts. Somehow, though, the promise of endorphins manage to override those thoughts, forcing your face muscles into gear when someone orders you to “smile!”

So, is there actual happiness and excitement behind those photos? Or are some runners’ fake smiles really that good? We sifted through runners' submissions to find out.

Looks Like: A mother-daughter team ready to take on an epic adventure!

What It Was Actually Like: “I was freezing, and really had to pee.”

What It Was Actually Like: “To be honest, I wasn't thinking about the race at all. I was more just enjoying hanging out with my sister and friend, and chatting with the new acquaintance we met on the bus to marathon village. That's probably why I look(ed) so happy — if my thoughts had been on the race before me, I would have been a basket case.”

Looks Like: Wait, a selfie and a smile on an early-morning race day?! Looks like her energy levels where truly “all the way up.”

What It Was Actually Like: “I look pumped, but kept debating whether or not I should pee in the Porta Potties in the corral. I was terrified that using a Porta Potty would mean missing miss the start of the race, plus had already relieved myself less than 15 minutes beforehand! I knew that despite the urge to pee again, there was no way I actually had to pee. I met a girl who had run the Chicago Marathon, and told me Chicago was a cakewalk compared to New York. Despite the fact that I was about to embark on this more difficult course, I was somehow comforted to know that there are easier marathons out there.”

Jenny Harp, The NYC Half Marathon 2011

What It Was Actually Like: “I was mostly delirious at this point, for a few reasons: It was way too early in the morning, I was trying to stay warm in the cold, and I still couldn’t believe I was actually following through with [my plan to] run a full 13.1 miles.”

During: The (Usually) “Bad”

The “during” part of the race is not always glamorous. In fact, it's usually pretty messy. But while it’s easy to begin feeling defeated, there's a silver lining: It’s not that you’re only halfway through; it’s that you only have half to go.

Looks Like: The happiest mid-marathoner, ever. But wait... is she falling backwards?

What It Was Actually Like: “This was the best moment of my life, the first time I had fun running a marathon, and the moment I knew I belonged in New York City — six years after moving here. My face says it all... and that the third time is the charm."

Looks Like: Someone more concerned with nutrition than getting their photo taken.

What It Was Actually Like: “I entered the Boston Marathon after years of contemplating racing the famed course. Months of training with the Brigham and Women's Hospital team led to this moment at mile 10 when I reached my family and friends cheering me on wildly. Getting to this point with thousands of runners behind me, seeing my cheering crew approaching reminded me how meaningful the Boston Marathon is; the strength of the runners, the camaraderie of the crowd, and the purpose this race represents. You can't help but smile."

Looks Like: Oh my, someone isn’t having fun at all.

What It Was Actually Like: “My roommate’s endorphins clearly kicked in a couple miles before me, but in the end we were both happy… that it was over!”

What It Was Actually Like: “I was sad because I watched second place in my age group blow right past me at the finish.”

After: The (Surprisingly… Not Bad) “Bad”

As your cross that finish line, your arms may take on a mind of their own as they fly into the air in celebration. You may break out in a massive grin, or have tears streaming down everywhere. For some people, it’s both. Finishing a race is the ultimate mix of happiness and exhaustion, and getting a medal to prove your training wasn't for nothing is the ultimate prize.

Post-race, when friends coax you to smile for the final photo, you’re more willing to oblige. This photo is meant to encompass your pride, your relief, and your accomplishment. “Meant to” being the key words, since we all know that at this point, we've essentially traveled to hell and back — and we've got the windburned cheeks, sweaty faces and haywire ponytails to prove it.

Either way, running (and finishing) that race was a big deal… and big deals are always deserving of a big reward at the end. Mostly in the form of burritos and burgers.

Katie DeVantier, The Philadelphia Half Marathon 2014

Looks Like: A fit group of friends who just finished Philly together! Hooray!

What It Was Actually Like: “I was seriously worried about how I was going to manage to make it the half mile back to the hotel.”

Looks Like: Someone who is seriously regretting what they’ve just done.

What It Was Actually Like: “I’m never running, swimming, biking, jogging, walking or moving ever again… wait, should I sign up for an Ironman?”

Looks Like: In pain? Yes, definitely in pain, and probably thirsty.

What It Was Actually Like: “Sorry, no surprises here: Everything hurts and I'm dying.”

Jenny Harp, The NYC Half Marathon 2011

Looks Like: Happy with a job well done! (Or maybe just happy to be done?)

What It Was Actually Like: “I was beyond happy that I finished the race — and without stopping once! That last mile was so hard and I didn’t think I was going to make it, especially the last tenth of a mile, since New York Road Runners counted down every 200 meters from there until the finish. That countdown really made it so much worse.”

Looks Like: Tired, but happy and enjoying the post-marathon relief of being done

What It Was Actually Like: “[I felt like] complete poop. This was after my first marathon, and while I was proud of beating all my goals, I had underestimated how much pain there might be. My quads were shot, my arms were killing me, and I just wanted food. I sat down on the floor of Trader Joe’s barely 45 seconds after this photo was taken.”

The good news is, race photos are far from yearbook (or, let’s be real — Instagram) pictures. But the biggest difference? They're real.

Consider this your friendly reminder to always focus on the feelings, not photos. Remember to embrace the race. If you feel great, let that drive you forward — not the worry of Mom getting another photo of your mouth hanging open at mile three.

More like this
7 Expert Tips For First-Time Pickleball Players
By Carolyn Steber
American Girl Doll Memes Are Going Viral On Instagram & Tiktok
By Emma Carey
What Is A “Softboy?” The TikTok Term & Aesthetic, Explained
By Courtney Young
Why Are TikTokers Slapping Each Other With Tortillas?
By Courtney Young
Get Even More From Bustle — Sign Up For The Newsletter